Is Alisson the problem? 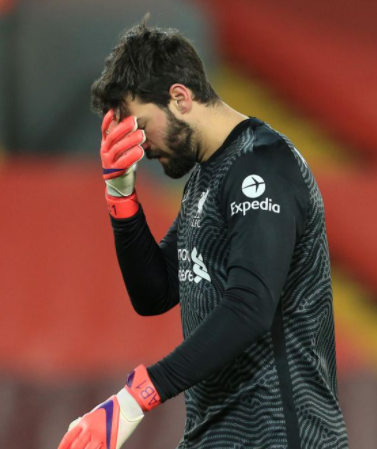 At around 2.15 on Saturday, Liverpool, the reigning champions of England, conceded a 2nd goal against Leicester. Alisson put his head in his hands while Jamie Vardy did his best Jimi Hendrix impression at the corner flag. Leicester are one of the best teams in the league, conceding to them is nothing to be ashamed of. But with that second goal, Liverpool's world, a world they had built so carefully and successfully over the past 6 seasons, continued to crash in on them.

Sunday followed, and rumours circulated on social media that Jurgen Klopp was going to quit. An unlikely scenario, one which the club labelled "nonsense", but which points to the crisis surrounding the club. With some busy weeks ahead, Klopp and his coaching staff have a plenty of problems to solve as they aim to secure a 5th consecutive appearance in the Champions League, either by winning this years' competition or finishing in the top 4 domestically.

The most glaring of these problems, brought into focus in the last week, is the form of Alisson. The Brazilian has made three errors leading to goals in the past 10 days. With Adrian's not seen as a viable option anymore and Caoimhin Kelleher too inexperienced to step into the position on a semi permanent basis, Klopp will persist with Alisson.

So what has gone wrong in the past month for one of the most dependable players in the Liverpool squad?

When you look at the statistics, not a lot. Several stats remain consistent between the 19/20 campaign and the current, 20/21 season. He's making just over 2 saves per game, up from exactly 2 saves per game last season. He's made the aforementioned three errors leading to goals, not much more than the 1 he made last season, albeit coming in more important games this season . His save percentage is down from 72% to 68%. However, for comparison Ederson is up from 72% to 81% while David De Gea has dropped from 73% to 63%.  However, Liverpool are now conceding more shots on target and will surpass last season's total in the next few games. It's a bad time for Alisson's form to drop even a few percentage points.

A lot has been made of the absence of Van Dijk in the middle of defence. Whether one player, especially a defender, is the reason for the team's poor form is up for debate but it's clear that sides facing Liverpool now play in a different way. After 20 games, Alisson has made 18 sweeper clearances, last season he made 19 clearances in 29 games. Without Van Dijk's anticipation and pace to help out, the Brazilian is being called upon more often. In attack too, he's playing a different role. There are less long balls, an average of 4 per game has decreased to 2.9 per game and he now makes slightly more passes per game too. Alisson, and his teammates, have been asked to change how they play and it's possible this affected other parts of his game but if it has, it hasn't shone through in any statistics.

To defend Alisson even the most hardcore apologists don't have to try very hard. There is very little between his work last season and this. Virgil Van Dijk is missing, as are a host of other players, which has affected Liverpool's form and results but to place any blame at Alisson's door is harsh and unwarranted. He has cost them in the past two games with the spotlight shining on him but after 2 near flawless seasons behind him, he deserves, and will probably receive, the support of his manager.