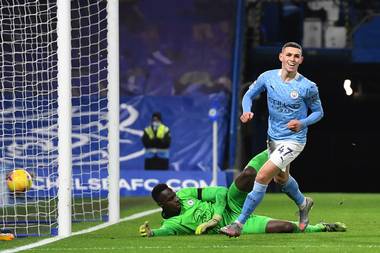 Stamford Bridge was the fortress that needed defending after one win out of Chelsea’s last six games, the pressure was on for the home side to deliver against the visiting former Champions Manchester City who has won five of their last seven games since their defeat to Tottenham in November. The Battle of the Shades of Blue is never a boring affair and this game was no different.

Manchester City have lost to Chelsea more times than any other side, with Pep Guardiola losing 4 times against the men in darker blue. Arguably this fixture for both sides was played at a good time for each as Manchester City had numerous absences from their squad due to positive coronavirus tests including goalkeeper Ederson and right-back Kyle Walker, Chelsea’s current form will be music to Pep’s ears who do appear to have lost their sparkling form from earlier in the campaign. Cesar Azpilicueta takes his place in right back in place of Reece James who is still battling with injury, Timo Werner gets the nod ahead of both Tammy Abraham and Olivier Giroud. Either team will feel as though they have some sort of advantage over the opposition. When you look at this fixture, goals is the word that springs to mind, it could have gone either way depending on who was most up for it because let us be honest, we now live in a world where anything could happen seems like Ellie Goulding was right anything could happen…. Now the good stuff onto the game…

The team line-ups were as follows:

Chelsea began the game looking sharp, and probably looked more up for the challenge than City within the first 10 minutes of the whistle being blown. Five minutes in and Chelsea appeared to keep a high press, pressuring City’s defence. With Ederson out of today’s fixture it left Pep to appoint a first-team debut for stand-in keeper Zack Steffan, within four minutes he had picked up a yellow card from referee Anthony Taylor, a yellow card which highlighted the inexperience of the stand-in keeper, conceding an indirect free kick from a back pass on the edge of his box, gifting Chelsea a golden opportunity on the edge of the box, a promising area for the men in dark blue. However, by the time Chelsea decided who would take this golden nugget of a free-kick it was Christmas again and we are now in 2022, okay okay I exaggerate but still, it did take an age to decide between Mason Mount and Hakim Ziyech, the latter took the free-kick, and the shot was blocked by Ilkay Gundogan. Chelsea were constantly on the counterattack with the front three combining well at that time in the game, various crosses were being whipped into the box to Timo Werner and Christian Pulisic who could not get onto the end of them due to the issue of Chelsea’s forwards having a lack of height, perhaps Frank Lampard forgot to give them their dose of Miracle-Gro? Who knows???

The game at this point appeared even and it was a case of who could open up the opposition first, City were finding it difficult to keep the ball in Chelsea’s half, the City I witnessed in the first ten minutes or so did not look like the team who were punishable by nature. Boy was I wrong, Steffan eased up and looked far more comfortable in his role, City as a team seemed to really settle down and decided to give the home team what for. At 17 minutes in, City really started to up the tempo with Kevin De Bruyne attempting at goal, the shot went slightly wide. After this attempt, the flood gates opened for City and they looked like a force to be reckoned with, attacking from all angles. In the 18th minute, Gundogan opened the scoring and set the difference between the sides with a great turn from a Foden pass and fired it past Mendy. And 3 minutes later Phil Foden managed to bag himself a goal from a Kevin De Bruyne assist, he coolly swept the ball past the near post into the goal, as a goalkeeper Mendy should not be beaten at his near post, I mean he really is showing his KEPA-bilities, apologies his capabilities!! Moving swiftly on, Phil Foden managed to get himself a goal and an assist to Gundogan’s goal proving his worth to his manager, surely Pep the boy is a dead cert going forward? He terrorised Cesar Azpilicueta with his pace and the Chelsea captain could not handle him. From this point forward City absolutely dominated Chelsea with their attacking thrust, the camera zoomed in on Chelsea Manager Frank Lampard’s face and jeez the man needs a hug or a miracle or both…At 24 minutes in City had dominated all possession within the last 10 minutes with 80% compared to the home sides measly 20%, now I am no mathematician, but those figures would scare any Chelsea fan. At one point in the match, I witnessed Phil Foden outmuscle…YES OUTMUSCLE Kurt Zouma, Foden’s desire to get on the ball was so refreshing. Desperation shots were being fired left right and centre from Chelsea, Mason Mount struggled to get into the game with conceding silly and unnecessary fouls. Ziyech’s slack passing ended up at Kevin De Bruyne’s feet if this slack play had not occurred, I had forgotten Ziyech was on the field, where you been??? Pep was playing his famous high line which worked wonders and in the 34th minute from a Chelsea free-kick ricocheted off from Kante to a City player - the ball then landed to Raheem Sterling, Sterling was off like a shot running ragged up the field, Kante did his best to get back and cover Sterling, Sterling is made to go further wide and wait for back up, he takes a shot and it hits the bar, the ball falls to Kevin De Bruyne and as cool as you like De Bruyne finishes the shot well and goes past Mendy making the scoreline 3-0 to the away side. At some point in the season, it is a well-known fact that City absolutely annihilates an opposing team 5,6 nil, this game could easily have been the typical Pep pounding if Frank did not make appropriate changes and fast.

Surprisingly, Lampard did not make any changes to his team, despite his team seriously lacking the aggression and intensity, he did not think to make the changes…okay. Second half Chelsea tried to get time on the ball and attempted to make some sort of impact on what was left of their dignity; however, City were on the press and bullied the Chelsea players off the ball, Kante gave the ball away cheaply in the middle of the field, which added to his frustrations he ended up getting booked for a silly challenge outside the box which meant his yellow card tally was at 5 and he will miss the next domestic match adding further woes for Frank Lampard. Chelsea did have some moments to get something from the game, Ziyech driving forward up the field and finds Mason Mount, I am not entirely sure whether it was an attempt on goal or whether it was a pass, but it went straight to Steffan. City remained composed when Chelsea attempted on goal, and the home side found it difficult to break down City’s defences. At 64 minutes Frank took the plunge and made a double change taking off Ziyech and Kante who could have been possibly heading for a red card, he replaced them with Callum Hudson-Odoi and youngster Billy Gilmour. The changes did make Chelsea look more alive however they got more and more desperate with Kovacic receiving a booking for a challenge on Zinchenko.

The next step for City was to maintain a clean sheet, however, Chelsea did begin to push City’s backline, even Timo Werner began to put pressure on solid performer John Stones, Stones managed to put off the speedy forwards attack, so much so he ended up going over the blue advertisement barriers and into a sea of blue banners, I wonder if he forgot where he was for a moment and thought he was in a 1st period Physical Education class at school, with these blue acrobatic mats everywhere, is it any wonder?

Pep made his first change for the final 15 minutes, taking off first goalscorer and Man of the Match Ilkay Gundogan for Fernandihno. Frank made his final change of the match as he took off the frustrated Kovacic for the struggling Kai Havertz, this potentially could have been his real chance to shine and show the Chelsea faithful exactly why he was purchased in the first place. His attempts to outmuscle Fernandihno off the ball were indeed laughable, just was not happening. Phil Foden and punisher Kevin De Bruyne were next to be rested and were replaced by Riyad Mahrez and Sergio Aguero. Foden received tremendous praise from his manager, surely now he has gained a place in Pep’s starting line-up. With two minutes of extra time added Chelsea did manage to put a stop to City’s clean sheet and the substitute Callum Hudson-Odoi scored for the home side, a weighted pass from fellow sub Kai Havertz was then slotted home by Hudson-Odoi. Gamed finished 3-1 to Manchester City.

What can we really say to round this up…when City are in a punishable mood they certainly take no prisoners and jeez Chelsea were unlucky to be on the end of it. Aside from the initial 10 minutes where City were slowly easing into the game, they ran riot around Chelsea and made a mockery out of the team. City throughout the game were completely in cruise control, at one point I am sure I saw De Bruyne chilling with sunglasses on running about with a Mojito in hand, complete holiday mode. Chelsea looked as if they never really left first gear, initially to look at the Chelsea squad you genuinely feel as though that starting eleven should cause more damage than they are at present. After the game, there was a lot of debate about whether Frank should stay or leave. I am sure the Screamers will discuss this at serious length in the coming podcast, instead of a Chris Wilder bashing I am sure there will be time for a Frank Lampard round as well. It appears the December blues remain firmly at Stamford Bridge pouring into January. What will Frank do next?

Thank you all for reading my latest match coverage, and Happy New Year to all you football fans! I feel as though we have an interesting year of football ahead. Again, big thanks to my favourite chaps on the Total Screamers Podcast for featuring my match coverage. Always a pleasure!