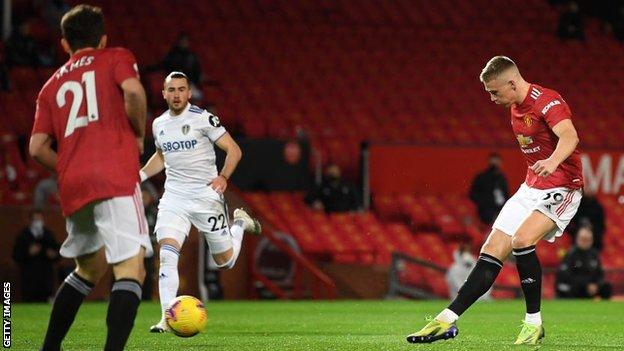 Now surely this fixture just sends shivers down your spine. This is not just any fixture this is a battle between Lancashire and Yorkshire, it is the battle of the United’s. The battlefield is Old Trafford. Let the battle commence…

2004 was the year, the last time these two sides met before Leeds United were relegated. An extremely long time coming for the Yorkshire men. Opinions of this fixture have divided many with how this game is going to end with Manchester United struggling to find decent form and Leeds with their ability to pull all the rabbits out of Magician’s Marcelo Bielsa’s hat to grind out a result. In fact, I believe that the Total Screamers host and my other half Simmo publicly declared that Leeds would bring the game to Manchester United and paste them? I think were the words used in the podcast, by the end of this analysis we will see if he has egg on his face or not.

Realistically this game had the potential to go either way, are you ready for this?? Of course, you are.

Prior to kick-off Manchester United were sitting in 7th place in the Premier League, whilst Leeds were in the bottom half of the table in 14th. A Man Utd win would take them to 3rd in the Premier League overtaking Everton. Leeds would have the opportunity to take a place at the top of the table should they win. Line-ups were interesting for the home team as Ole Gunnar Solskjær made five changes from the team that defeated Sheffield United 3-2, interestingly enough there was a place for Daniel James in today's line up not making an appearance in the Premier League since starting against Chelsea in October, James had been the target for Leeds last summer and Manchester United swooped in and nabbed him from Leeds’s grasp, since falling out of favour with the Red Devils he has again been heavily linked with the Yorkshire side so this was a bit of an eye-opener on Solskjær’s behalf, are we going for some mind games here Ole? You guys can be the judge. Marcelo Bielsa remained with his unchanged line-up that beat Newcastle 5-2.

The full team line-ups are as follows:

With Sir Alex Ferguson in attendance, the pressure was on for the home side to deliver. And deliver they did, Scott McTominay put Man Utd onto the front foot within 2 minutes of the match starting, the game you could say was gone in 67 seconds. An assist from dangerman Bruno Fernandes helped McTominay find the net and the ball landed in the bottom right corner, an aggressive and intense start for the home side saw another goal come in from McTominay, extending their lead to 2-0 within three minutes of play. Leeds looked shell-shocked and their defence had been ripped apart by Scott McTominay within three minutes, it looked bleak for the visitors, but you can never write a Bielsa side off too quickly. McTominay looked threatening inside and outside the box, a hat trick looked more likely for the unlikely goal scorer. Leeds needed a response and wingers Jack Harrison and especially Brazilian Raphinha ran themselves ragged up and down the wings in order to find some sort of response to the score line. Raphinha had a clear chance shortly after the second goal after being picked out in the box by Jack Harrison however Luke Shaw intercepted the chance, yeah you heard that correctly Luke Shaw DID perform some defensive duties today. Shock. Leeds were desperately trying to get something from this with Patrick Bamford missing a crucial chance. Slack passing from Luke Shaw saw Leeds try their luck through Rodrigo and was unsuccessful, yeah you did read that right from Luke Shaw…I would say clever dumb balance has been restored from his defensive block earlier in the match.

However, Leeds looked like they were not in a giving up sort of mood and Bamford did find the back of the net, but the flag was quickly raised for offside, anyone else think that Bamford and offsides seem to be making some sort of double act at this period in time??

Shortly after Bamford’s offside goal, in the 20th-minute danger struck again for Leeds, right-back Luke Ayling failed to block the killer strike from Bruno Fernandes making the score line 3-0 a steeper mountain for Leeds to climb.

Leeds began the counterattack again and Raphinha complained to referee Anthony Taylor about a challenge Fred made on the follow-through, however, play was continued. Leeds did continue to push forward with intensity, Klich picked out Bamford for a chance which he headed over the bar.

Manchester Utd looked dangerous on the counterattack with Daniel James showing his pace, but his lack of technical ability showed. Manchester Utd looked dominant and quickly extended their lead as Leeds were not able to deal with another set-piece, Victor Lindelof netted Utd’s fourth of the match as Stuart Dallas and Kalvin Phillips lost their men they are marking. 4 minutes later Leeds Captain Liam Cooper managed to head home a chance from a corner making it 4-1 before half time.

At the start of the second half, Bielsa did not hang about so to speak, and made two changes taking off Mateusz Klich and Kalvin Phillips, he brought on Jamie Shackleton and Pascal Struijk. Quickly Man Utd were on the prowl and Anthony Martial missed an early chance. Leeds equally had as many chances as Raphinha whipped in a cross over Wan-Bissaka’s head to Rodrigo who was waiting in the box, David de Gea made a good save in stopping Rodrigo’s effort. Leeds at this point were putting in tremendous efforts to put pressure on Man Utd’s back line which at times this season has been suspect, to say the least. I enjoyed watching Leeds maintain their fight back mentality as they genuinely felt like they could muster up some sort of miracle and get something from the game. Rodrigo and Raphinha were busy boys keeping the opposition's back lines occupied.

Unfortunately, it was not to be and Daniel James in the 66th minute stuck the fifth goal past Meslier, Scott McTominay who worked himself into the ground today and played well finding the space, winning the ball, and orchestrated a technical pass to Daniel James who then stuck the ball past Meslier with a left-foot shot. A blow to Leeds as Liam Cooper was struggling with an injury and needed treatment, moments after being deemed fit to carry on – he needed to be substituted with youngster Leif Davis taking his place on the pitch.

Man Utd looked so dangerous and a real threat as Pascal Struijk made a clumsy challenge on Anthony Martial in the penalty area and saw Leeds afternoon go from bad to HOLY HELL WHAT IS THAT - KIND OF WORSE…the worst thing for Leeds would be Bruno Fernandes to step up to the penalty spot and as it is Fernandes he stuck the ball past Meslier who made no attempt to save (lazy so and so) and Bruno made the scoreline 6-1. At this point in the game, we are beyond facepalming as viewers as it is like car crash tv for Leeds, you don't want to direct at your screen but then you can’t not look. Ole Gunnar Solskjær makes two changes taking off Bruno Fernandes and Marcus Rashford, Bruno I believe has had back problems carrying this Manchester United squad through the league. Make of that what you will…Donny Van De Beek and Edinson Cavani came on for the star pair. If I were a Leeds player, I would be quaking in my Adidas boots for Cavani to be let loose on my tired legs.

Leeds did manage to get their score tally up by one and it was in the form of Stuart Dallas scoring a super strike laid off by Raphinha, sad but this goal probably will be overshadowed by the caliber and number of goals from Manchester United. Making the scoreline at full time being 6-2.

Now, as Simmo is my other half we tend to watch games together and I can tell you all that he said and I quote “I call this now, this game will be the game of the season”, folks I hand the decision to you all - should we take his word for it as earlier in the article I referred to his pre-match prediction of Leeds bringing the game to Man Utd. He also predicted Scott McTominay for Man of the Match and he was correct, Simmo you ain't Meatloaf but 1 out of 3 is not bad my love.

So, everyone, what a game I am exhausted from this. I will be sleeping this off for the foreseeable. Also, a big shout out to my dad who will be gutted for this loss as a big Leeds United fan and the fact his daughter had to document this – please keep me in your will, and Merry Christmas to you dad.

All I can say is, could this really be Ole regaining control at the wheel with the driving force his players showed today, you guys let the Total Screamers know your thoughts. Sad for Leeds as they are a remarkable team to watch under an eccentric and interesting man such as Marcelo Bielsa. Bielsa will surely be back with a vengeance.

I would like to thank you all for reading the latest Match Coverage and I will be back soon with a new article soon. Big Thanks to my favourite chaps Total Screamers for allowing me this opportunity.