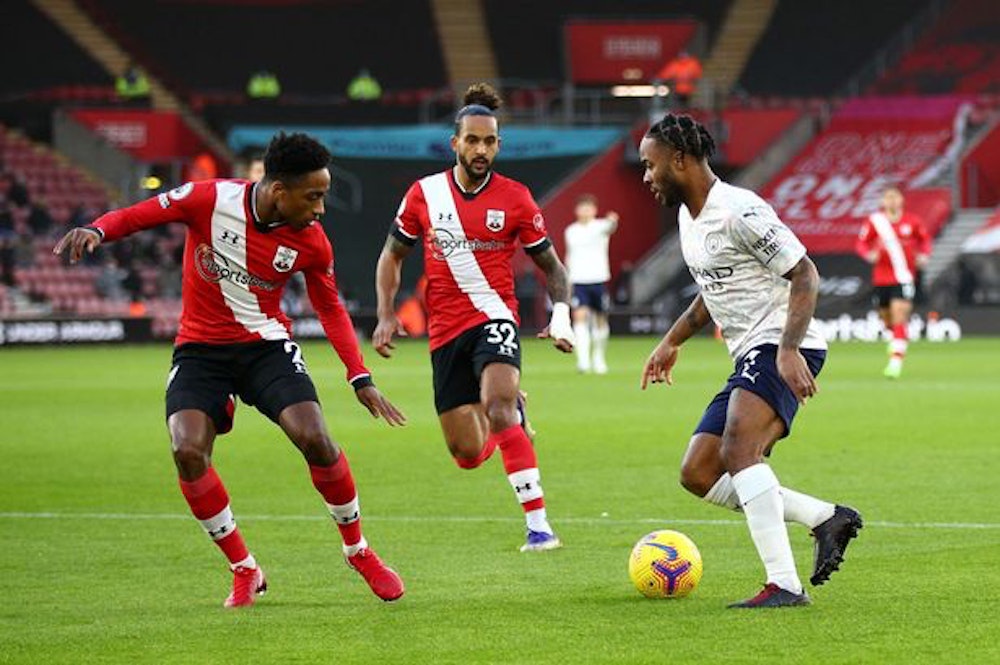 To look at the fixture above you would think “Ah City will thrash little Southampton by a landslide!!” However, prior to kick-off, the truth of the matter was that Southampton was positioned higher up the Premier League table than the former Champions – a lot of Liverpool fans would be rubbing their hands together in gleeful happiness (Yes Screamers I am talking to you both!”) Ah how the mighty have fallen…

So, going into this fixture at St Marys the pressure really was on for Pep and his team for those sought-after 3 points. A special occasion for Southampton boss Ralph Hasenhüttl, as it was his 75th game in charge for Saints, and what a game to highlight this occasion.

Onto the game itself and let us talk line-ups...Ralph Hasenhüttl was again lucky with a full squad to choose from. City would not be so lucky with squad availability as they were without Gabriel Jesus and Aymeric Laporte who were deemed not fully fit. City would have a boost with the return of Sergio Aguero who would take his place on the substitute bench.

Manchester City have not conceded in their last 3 away games and would be hoping to maintain that momentum going into this fixture and began with a high intensity as you would expect from such a side. As always City started with good possession and really tried to push Southampton from the get-go. Saints matched City’s intensity and were aggressive and forward-thinking in their attack making sure to put pressure onto City’s backline. City were having a good spell within the first 12 minutes with Southampton having to stay back in numbers. Right-back Kyle Walker-Pieters seemed to relish in the challenge of keeping Raheem Sterling at bay and performed very well in his defensive duties. Saints were lucky when Rodrigo stepped up and launched the ball into the back off the net early on, but the goal was deemed offside. Shortly after, in the 16th minute Raheem Sterling netted home what ended up being the winning goal with clever link-up play involving Kevin De Bruyne and Bernardo Silva, it was vital for Saints to remain composed in possession – Bernardo Silva swooped in to get the loose ball from a bad clearance made by Jan Bednarek, passing onto the man I call a punishment who you don’t want to deal with: Kevin De Bruyne who then beat Bednarek in pace and agility slipping it onto Raheem Sterling who stuck the ball past in form keeper Alex McCarthy.

At this point, Southampton needed to show that they were made of sterner stuff and needed a reaction, their fans stepped up the cheer to drive their team on, with Oriol Romeu driving the team forward finding forward passes to Danny Ings and Che Adams who found the afternoon a frustrating one as neither one could find the back of the net. Saints failed to get a shot on target until 20 minutes in when center-half Jan Vestergaard played an adventurous overhead pass to Kyle Walker-Pieters who was waiting on the wing fired the ball into the box for Che Adams who subsequently missed this vital chance. After opening the floodgates, the chances appeared in their plenty for the home side, with their set-piece wizard James Ward-Prowse whipping balls into the box hoping for danger man Jan Vestergaard to extend his giraffe-like neck and head the ball into the net, Vestergaard is such a threat in the box, usually, the ball just seems to find his head like a magnet – he did come close but to no avail. I would just like to take a moment to discuss Theo Walcott, now for us 90’s kids, we grew up with Theo Walcott being the next wonderkid at Arsenal, he fell out of favour numerous times and more recently I am surprised that Carlo Ancelotti did not clock his brilliance, since he joined Southampton his energy and ability is so magical to watch, Ralph Hasenhüttl has given Walcott an opportunity to find his form again and now it appears he has a new lease of life as well as racking up precious game time minutes. The number of crosses he chucked into the box for Ings and Adams to get on the end of was in the double figures, lets be honest guys if we had to take a shot for every cross Theo whipped in, we would be absolutely blootered am I right or am I right?? To add to the frustration within St Mary’s, Danny Ings believed he should have been offered a penalty when defender Ruben Dias stuck his boot a bit too high near Ing’s face, the question is, is it a pen or is it not with referee Mike Dean who the hell knows??? However, in this case, it was a massive no from him, and he continued play.

Sadly, for Ings, this was his final few moments on the pitch as his knee decided to give way and it forced him to make an early exit from the pitch and was replaced by youngster Nathan Tella – this for many was an interesting move on Ralph’s behalf as he had various experienced players on the bench in the shape of Nathan Redmond, Stu Armstrong and Shane Long, question…what was your thought process here Ralph we all need an answer, I especially need some closure on this matter. You can tell how much the Saints fans love and appreciate Danny Ings when he went down, 2,000 fans gasped in anxious anticipation awaiting what the outcome would be. An absolute huge blow for the home team just before half time.

At the start of the second half, City looked ready to rumble with Ferran Torres looking exceptionally dangerous, with the punisher Kevin De Bruyne consistently linking up well with the young Spaniard and finding some good positions in particular frustrating Jan Vestergaard who on a couple of occasions needed to recover better. Bernardo Silva also let his presence be known with a good chance early second half. On numerous occasions, it was clear to see that Southampton really do have a threat down the right-hand side of the pitch as Walker-Pieters was spotted shouting for Vestergaard to perform his magic overhead pass he had done early in the first half. Saints looked very composed and City allowed them to get forward in the hope of catching them on the break with City sitting back and waiting.

In the 58th minute, Saints made a second change bringing in Nathan Redmond for Moussa Djenepo, I had a feeling that Ralph decided just to go for it 1 for 1. Right, here is the thing was it just me, or did Redmond appear to be in the wrong profession, I mean he looked like was an Ice Dancer rather than a professional footballer and offered far less going forward than Djenepo.

The connection between Sterling and De Bruyne is gripping as they look dangerous linking up and De Bruyne delivered many chances for Sterling to put away. De Bruyne himself was denied by goalkeeper McCarthy from slack play from Saints. Guardiola made his first and only change in the game with Riyad Mahrez replacing Ferran Torres, Phil Foden and Nathan Ake looked as if they were both going to be making appearances sometime after, Pep appeared to have changed his mind. Pep, question? What is with the chopping and changing your mind regarding subs, I would hate to be your wife asking you what you want for dinner, make up your mind son!!

At this point in the game, Saints were often caught on the counterattack and committed too many bodies forward allowing City to go on the charge forward leaving them exposed Saints did answer the questions City put to them. Mahrez appeared a threat in the minutes he was on the pitch with a couple of clear-cut chances which McCarthy had covered, and he dealt well with everything that was chucked at him. In the final few minutes, Daniel N'Lundulu replaced a frustrated Che Adams. Goalkeeper Ederson made his way into Mike Dean’s book for time-wasting, Ederson being the fourth name into Mike Dean's book which was surprising considering Mike Dean enjoys a card or 3,000 which is the number of bookings he has made over his career. Enjoy the power do you Mike? In the closing few minutes Southampton chucked the kitchen sink and the bathroom one at City throwing everyone forward in hopes to gain a point from this well-fought match, Theo Walcott missed the last chance of the game.

So, folks, what have we learned from this game? Never underestimate this Saints side as they are a team of fighters. They do have a lot of fight in them two seasons ago they were fighting a relegation battle for goodness sake, they were not disgraced today with the result just unlucky. Southampton are a magnificent team to watch with their forward-thinking abilities and attitudes.

City severely needed this win and did fight to the end as well.

We can also take from this that Nathan Redmond could have a new calling in life should his footballing career end, there’s always Dancing On Ice.

Anyway, I would like to thank the boys from the Total Screamers Podcast for asking me to do this review!

Thank you for reading my match coverage. Hope this will be the start of things to come!