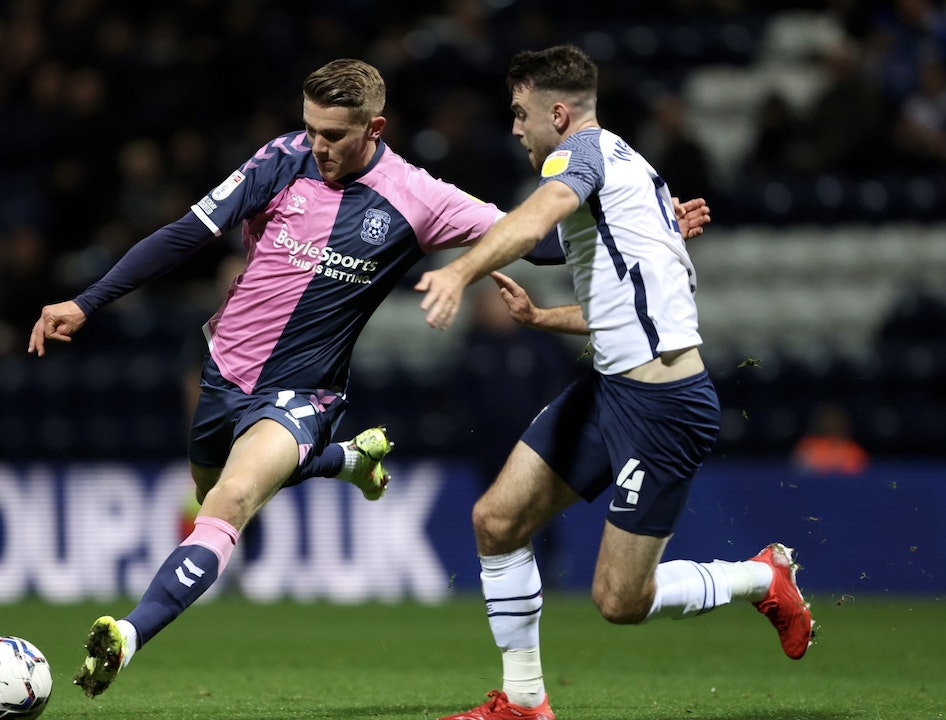 The Sky Blues travelled to Preston tonight for our midweek clash at Deepdale, a ground at which we’ve never won before. Preston are most certainly our bogey team, but tonight I felt confident we were capable of getting a result. Our away form has been up and down, so a point at least would’ve been a good result in my eyes ahead of kick off.

Sadly I couldn’t make the journey up to Deepdale myself to watch us tonight, so iFollow would have to do. I was pleased to see that Mark Robins had stuck with Tyler Walker after his performance at Blackburn, and it’s encouraging to see that Viktor Gyokeres is fit after the knock he picked up at Ewood Park as well. Watching on iFollow I particularly enjoyed the new “he goes by the name of Gyokeres” chant from the Sky Blue Army in the away end! That one will stick around for a while I think, alongside the Gustavo Hamer chant.

Early on Preston had a good chance from a corner, and Simon Moore was forced to make a smart save down to his right. Shortly afterwards we had a half decent chance of our own after some good work from Callum O’Hare, but Viktor Gyokeres could only find a defender in the way of his shot from the edge of the box.

The first half was quite entertaining, with both sides testing each other and at times the football was end to end. I thought we probably edged it though, and had more of the ball in the opposition half than the home side did - Callum O’Hare was finding a lot of space and he looked to be a constant thorn in Preston’s side. I thought the game had the air of one of those that could go either way; finely poised and just waiting for a bit of quality around either box which would make the difference.

The moment of quality came from the City right on half time - O’Hare picked up the ball just inside the Preston half and played a slick one-two with Fankaty Dabo, which put him in on the edge of the box. O’Hare was then able to slip the ball inside to Tyler Walker who initially looked like he had fluffed the chance, appearing to stumble instead of getting a shot off, but he quickly recovered and slammed the ball into the top right corner of the net! Whether he meant it or not is debatable - it could have been a fake shot to throw the defence off or it could have been a miss kick, only he knows I guess! We’ll take it all day long though, as the finish was brilliant.

Walker finding his shooting boots gives Mark Robins a bit of a selection headache going forwards. We’ve got Viktor Gyokeres, Martyn Waghorn, Matty Godden and now Tyler Walker all available and competing for a place in the team - Gyokeres has to start, so the others will likely rotate until Robins finds whoever he’d prefer to stick with. It’s a nice position to be in for a manager I suppose, and hopefully we’ll get the best out of all of them when they’re on the pitch!

It was great to be leading at half time tonight although I did feel that the game could still go either way - Preston had looked fairly good in the first half and we really needed to start the second half well to put the game to bed. Unfortunately for us, Preston came out fighting.

They gave it a good go right from the off, and eventually found their way through for an equaliser. A long throw in wasn’t properly dealt with by Ian Maatsen, who conceded a corner which was cleared away, but Preston kept the attack alive and worked the ball back into our box with a deep cross from the right. Big man Patrick Bauer got up well and headed the ball into the net from around the edge of the 18 yard box - a great header in fairness, as it was back across goal and even at full stretch Simon Moore couldn’t reach it. Perfectly placed, and now Preston had the momentum.

We weren’t really allowed much chance to play once the goal had gone in, as Preston had improved massively since the break. They continued to put us under pressure and eventually a quick free kick found Emil Riis, who got a shot away and beat Moore at his near post. It was another great goal, a very powerful shot that would’ve been difficult for any keeper to stop! You have to credit Preston for their second half performance really, they were very good.

Mark Robins made an unorthodox triple change shortly after we conceded the second goal. It wasn’t enough to force an equaliser from ourselves and I can’t really recall a significant chance for us in the second half anyway. Preston seemed pretty comfortable in the lead and in the end the game fizzled out and finished 2-1 to the home side. A disappointing collapse from ourselves this evening!

On the plus side, we’re still in the Play Off places in the Championship and our next game is against struggles Derby at home (where we still have a 100% record in the league this season!). Realistically we should be taking all 3 points from our next game, and given how tonight went I’m sure the players will be up for it on Saturday. Another positive for me is that Liam Kelly has slotted back into our team with ease - a few weeks ago I did think he might struggle to get back in our side with Gustavo Hamer, Jamie Allen and Ben Shead all looking decent but he’s had no issue at all, and it’s good to have him back! On to the next one City.

Will we ever win a game at Deepdale?!