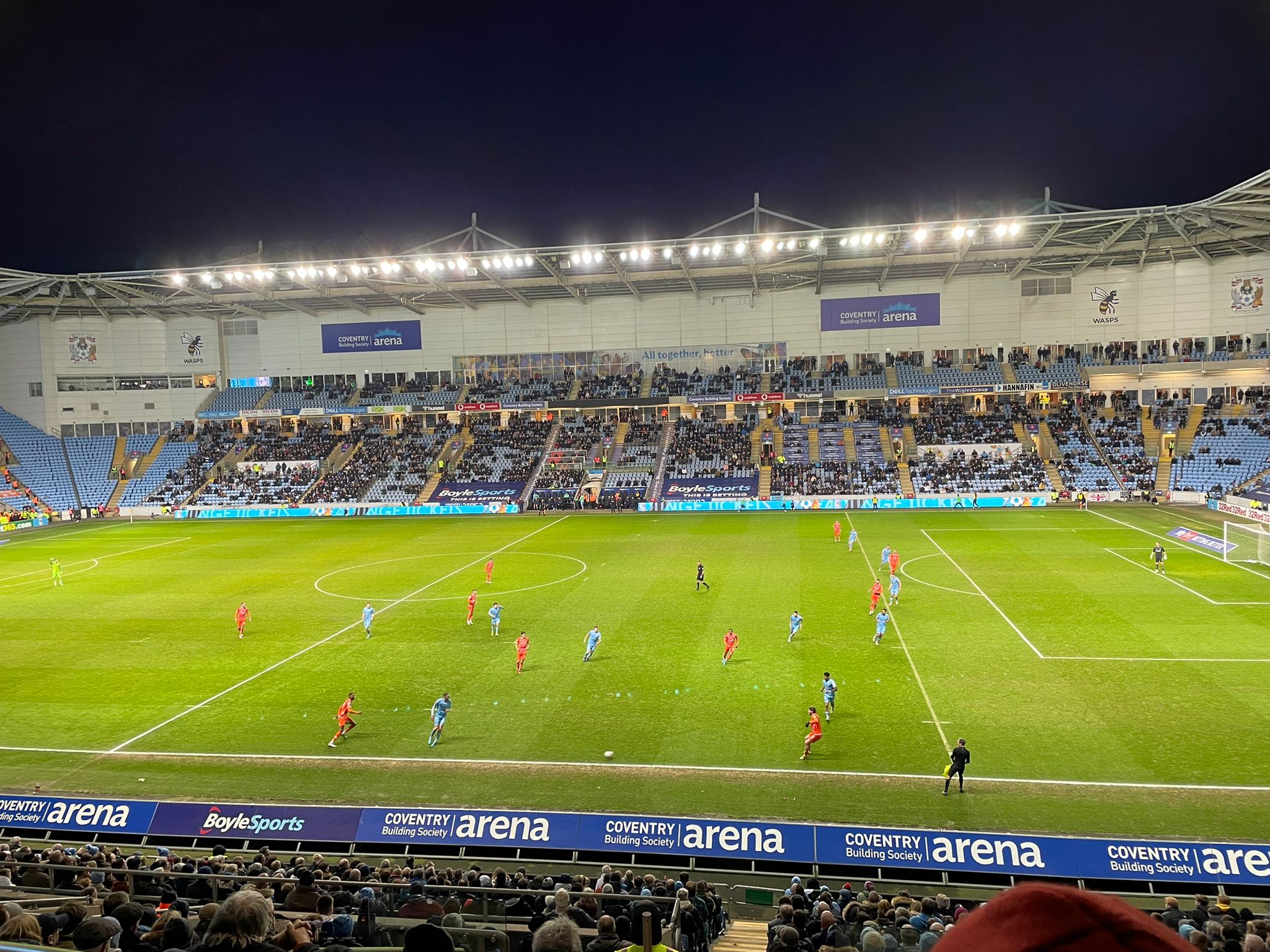 I’ve had a short break from writing the blog after not attending our FA Cup 4th Round tie away to Southampton at the weekend (sorry to disappoint any regular readers!). I’m currently trying to “do the 92”, which if you don’t know involves seeing a game at every ground in the football league - I’d already done St. Mary’s quite some time ago, so I didn’t need to go there again and instead wanted to tick a new ground off whilst not missing a Sky Blues league game. I settled on the Etihad Stadium in the end, spending the weekend visiting my mates in Manchester and watching Manchester City beat Fulham 4-1 in the process!

It was a great experience and was ground 37 out of the 92 for me, worth missing out on an away day in the Cup for in my eyes! I’ve heard that we played brilliantly by all accounts though, and were unlucky to go out to a goal in extra time. I’ve seen the highlights - Gyokeres took his goal beautifully, as did Southampton’s Stuart Armstrong! At least we can focus on the league now eh?

I actually couldn’t attend tonight’s game at home to Blackpool due to work commitments, something I wasn’t thrilled about but couldn’t really control. I ended up missing the first 20 minutes or so of the game too, but made it home eventually to watch the remainder of the game via iFollow. I had checked our starting line up ahead of kick off and was pleased to see Todd Kane back starting, after he’s been out of the team recently due to injury. Ian Maatsen had moved back to left wing back after playing in a more advanced role against Southampton, with Jake Bidwell dropping on to the bench. Jordan Shipley was also given a start for the first time in a couple of weeks and Viktor Gyokeres would again lead the line on his own.

As it happened, the first action I saw tonight was the opening goal. Blackpool were breaking away on the counter attack when I switched on, and were allowed in down our right hand side a little too easily. Dom Hyam was certainly beaten too easily defending at the near post, and failing to stop the Blackpool attacker from cutting the ball back across the box - we then seemed to be ball watching and former Coventry City loanee Gary Madine reacted quickest for a tap in at the back post. It was a soft goal to concede really, and from what I’d heard we had been on top for the most part since the game had kicked off.

We had had a couple of chances prior to going 1-0 down, but remained in the ascendency after the opener - Ian Maatsen had a chance on the left after the ball broke to him from a Todd Kane cross, but Maatsen’s bouncing effort was well wide of the mark. We had a shout for a penalty after a decent advantage was played by referee (and Aston Villa fan, as has been well documented by Sky Blues fans over the last couple of days!) Andre Marriner - Callum O’Hare was fouled, but the ball was still alive and Todd Kane was able to continue play, finding Jordan Shipley who did well to control the ball after a massive bobble on the pitch took it up into the air. Shipley actually used the bobble to lift the ball over a defender before bringing it down and shooting - the shot was blocked and it looked clear that it had hit the Blackpool defenders’ arm, but it was from nearly point blank range and the defender had done his best to put his arm behind his back. Not a penalty for me, but we were firmly in control of the game at that point!

Gustavo Hamer played Jordan Shipley in at one point with a beautifully weighted ball over the top of the defence - Shipley was only able to win a corner, after trying to shoot with his left foot when the ball would’ve favoured a right footed strike in my view! Shipley waiting for the ball to drop a little more on to his left allowed a defender in to clear the ball behind. From the subsequent corner however we did put the ball in the net - Dom Hyam rose highest in the box to head the ball down, and towards goal, but Viktor Gyokeres was a couple of yards offside when he turned the ball in.

Our equaliser actually came from a Blackpool corner - it was a poor delivery, straight to super Simon Moore in goal who came to claim the cross with ease. Moore then quickly played a long ball down field towards Viktor Gyokeres - Big Vik then completely out-muscled the defender marking him (Dujon Sterling, another former Sky Blues loanee!) to get in behind when he picked up the ball. Gyokeres carried the ball inside the Blackpool penalty area before calmly finishing behind the keeper Daniel Grimshaw. 1-1, and a really good goal it was! It’s great to see Gyokeres back amongst the goals - he’s now scored 3 in his last 4 games and in the absence of Matty Godden this has been vital!

We then had another golden chance before half time but sadly couldn’t convert. Jordan Shipley got in down the left and pulled the ball back across for Callum O’Hare, but his left footed shot was deflected wide for a corner - Blackpool dealt with this but didn’t clear their lines properly, and Ian Maatsen was able to float a ball back across the box where Michael Rose was the only person who gambled on it. He was onside too, and his run caught out every Blackpool defender meaning he had a free header from around 10 yards out - Rose sadly could only find the keeper and his header was tame, but what a chance - we could’ve gone 2-1 up right on half time!

It was a very lively game, and I had seen plenty of action despite missing the first 20 minutes! If what I’d seen of the first half was anything to go by though, I felt that we would go on and win from this point. We had been the better side and had shown more quality than Blackpool, and it would probably only take one clear chance to give us the lead.

We started the second half quite brightly, with a couple of half chances here and there from set pieces. Gustavo Hamer had a free kick from range saved by Grimshaw - it looked too far out to have a go from, but Hamer is a talented man! Viktor Gyokeres won us a corner not long after this with a low, driven shot being deflected wide for a corner - Dom Hyam got up to win the header but it was a tame effort in the end and was straight at the keeper. Blackpool then had a chance out of nothing, with Josh Bowler worming his way through to play in Gary Madine - Madine’s shot was saved at his near post by Simon Moore, though he did need to scramble to push the rebound out for a corner to the visitors.

It was a very fast paced second half. Blackpool were growing into the game, but we had a sense of urgency about our approach and seemed to have a lot of desire to win the ball back when we lost it. We were also playing some lovely one touch football at times albeit still searching for a winning goal.

Martyn Waghorn entered the fray to aid our search, replacing Jordan Shipley. Ian Maatsen then moved to the right hand side, with Todd Kane going off and Jake Bidwell coming on at left wing back. It was an odd move, with Maatsen being a natural left footer, but Mark Robins knows best! Blackpool substitute Jordan Thorniley almost scored from a Blackpool corner - Thorniley’s flick on looped high and had to be tipped over the bar by Moore in the end.

Blackpool then had a decent spell of pressure, in which I worried that we might get caught out again and lose a game that we should really have won. Thankfully they couldn’t break us down, although the Sky Blues looked very tired and little, unnecessary fouls were creeping into our game (I’m looking at you, Jake Clarke-Salter!). Waggy had a chance at the other end, after being brought down on the edge of the D. He took the free kick himself, but it curled well wide or the Blackpool goal much to everyone in Sky Blues’ dismay. Gustavo Hamer then went close a couple of times - an effort from range was deflected over for a corner, and almost scoring off a corner too! His delivery is lethal and I’m sure that one of these days, that pacey in-swinger will catch a keeper out and he’ll score. Grimshaw was able to punch the ball for safety in the end though!

The best chance of the half dropped to Hamer himself right before the end of the game. It was after some neat build up play down the left, with Hamer eventually cutting inside and playing the ball to Callum O’Hare - O’Hare back heeled the ball back to Hamer to compete the one two, after holding it up for a couple of seconds, but Hamer couldn’t apply the finish even with plenty of time to pick his spot. He missed the target altogether! It’s a shame, as the football in the build up was beautiful and deserved more - if it had fallen to a striker, it goes in for me!

That chance would be our last of the game, and to me it feels like 2 points dropped really. We were the better side on the night overall and had we been more clinical we would’ve won (I’m starting to feel like a broken record saying that now!). Blackpool are a team that we should be beating in my opinion, and with us chasing the play offs every point matters now! At least it wasn’t a defeat though, and we did play pretty well despite the result. Not winning has just added more pressure on to our next few games though, but with Reading away up next I don’t see why we can’t win that one. Cardiff away and Barnsley at home will follow, and again I’d have us down as favourites for both of those too!

I thought Gyokeres in particular was excellent tonight from what I saw, as was Gustavo Hamer - they are players who are thrilling to watch whether we’re winning or losing a game! I don’t think anyone had a poor game, the goal we conceded was soft but that’s football at the end of the day.

We may not win every week, but we’re certainly entertaining!

Some photos from my trip to the Etihad on Saturday, as well as some match day photos from tonight once again supplied by Joe - thank you! 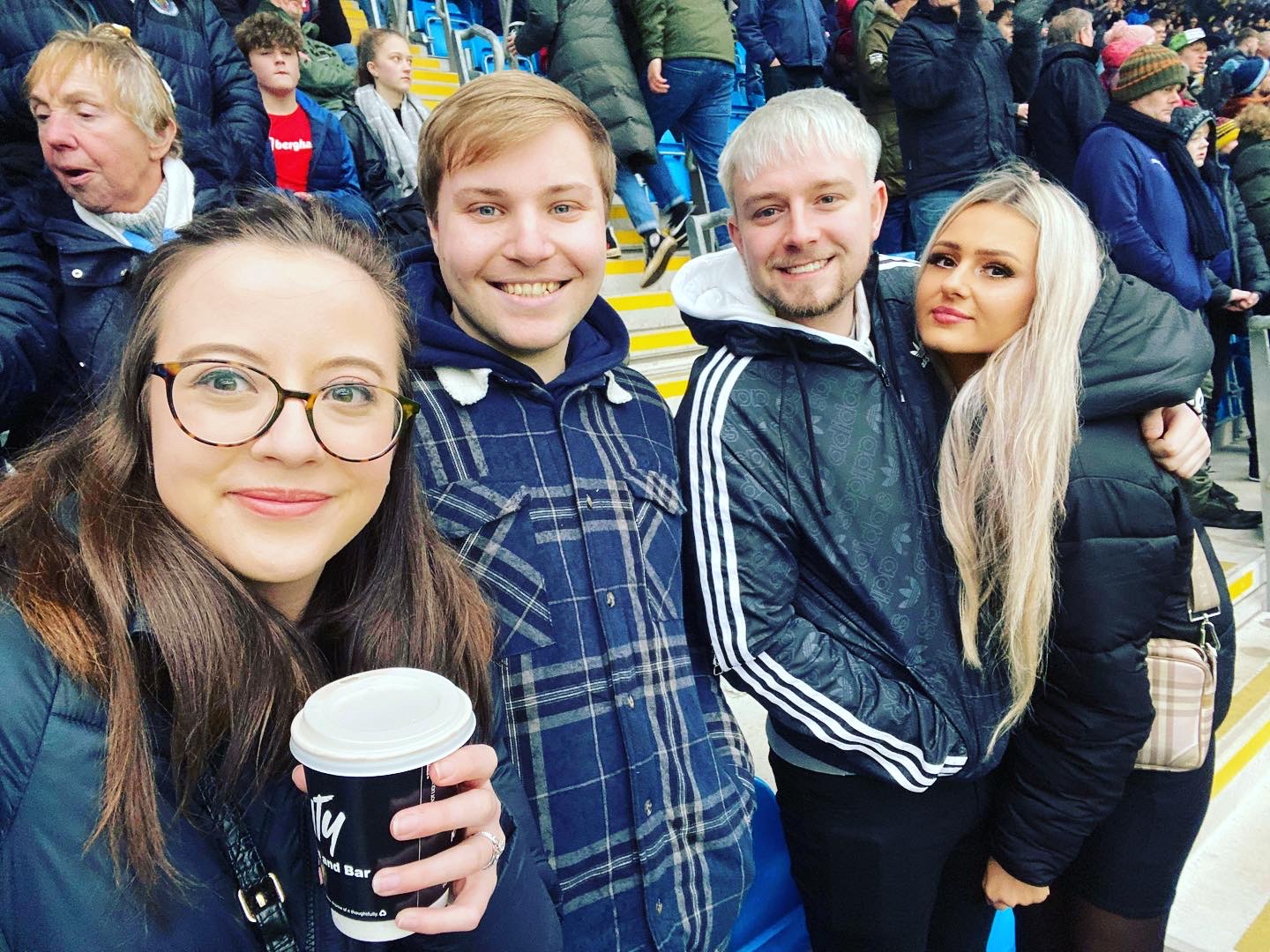 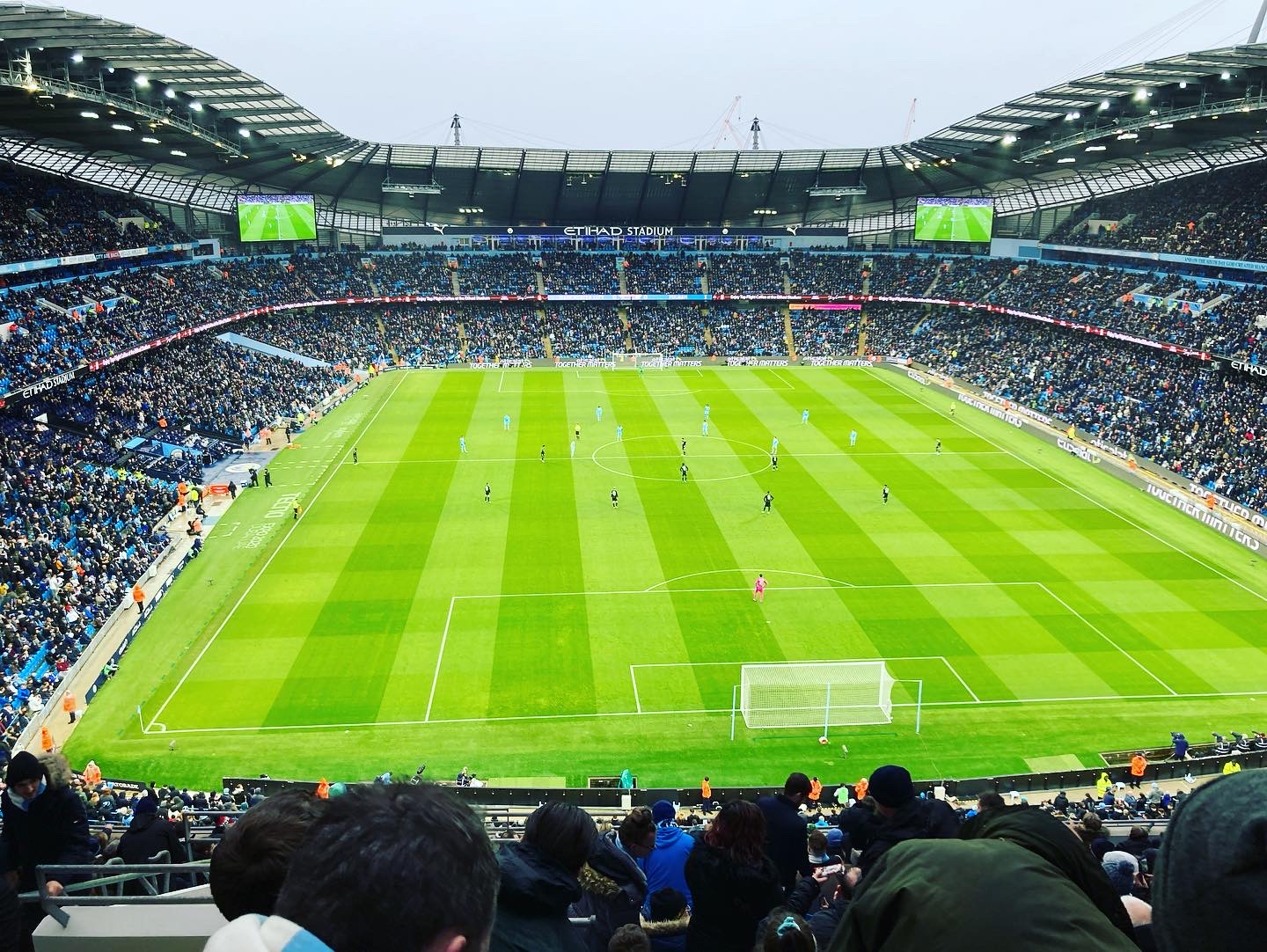 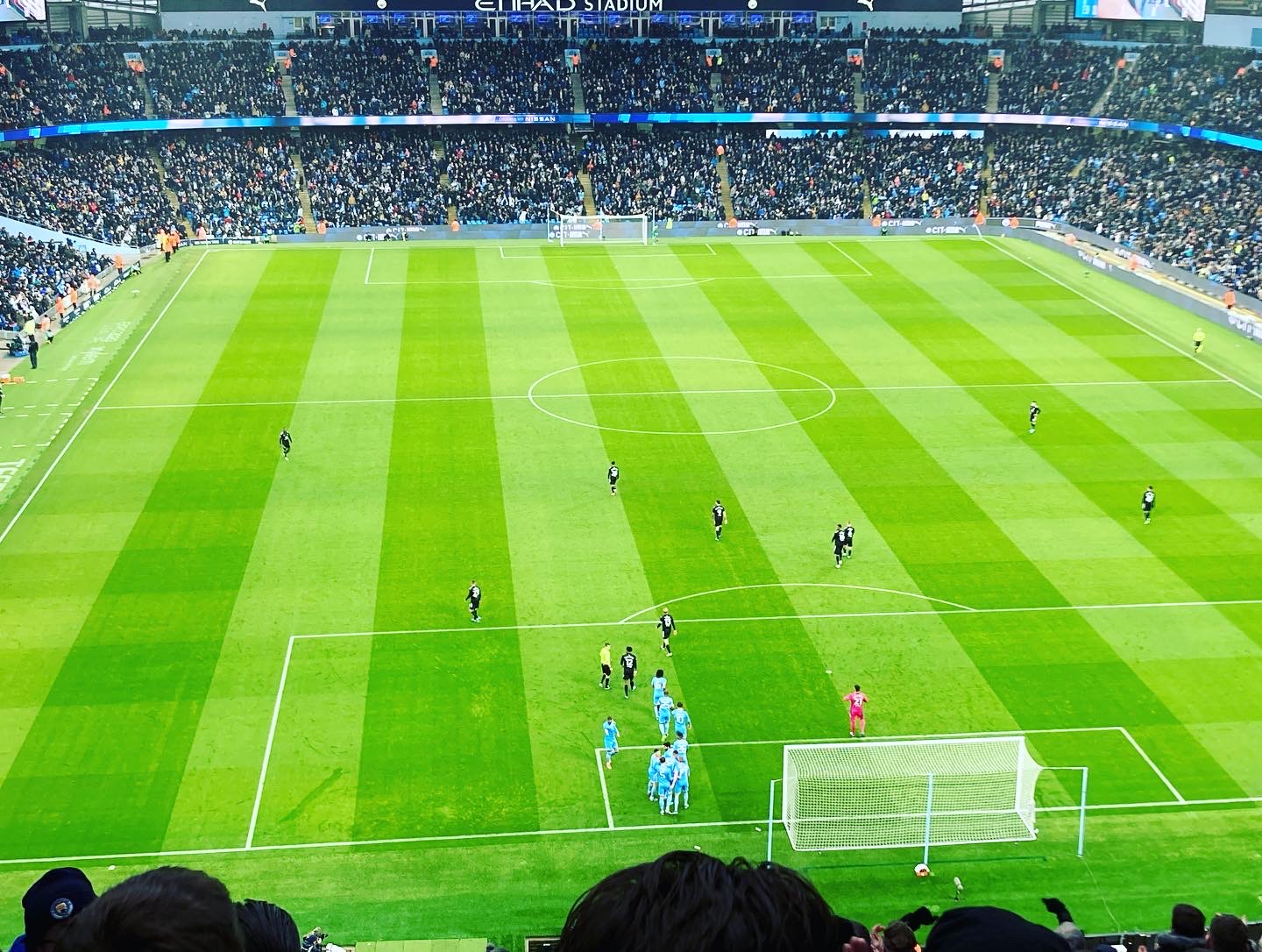 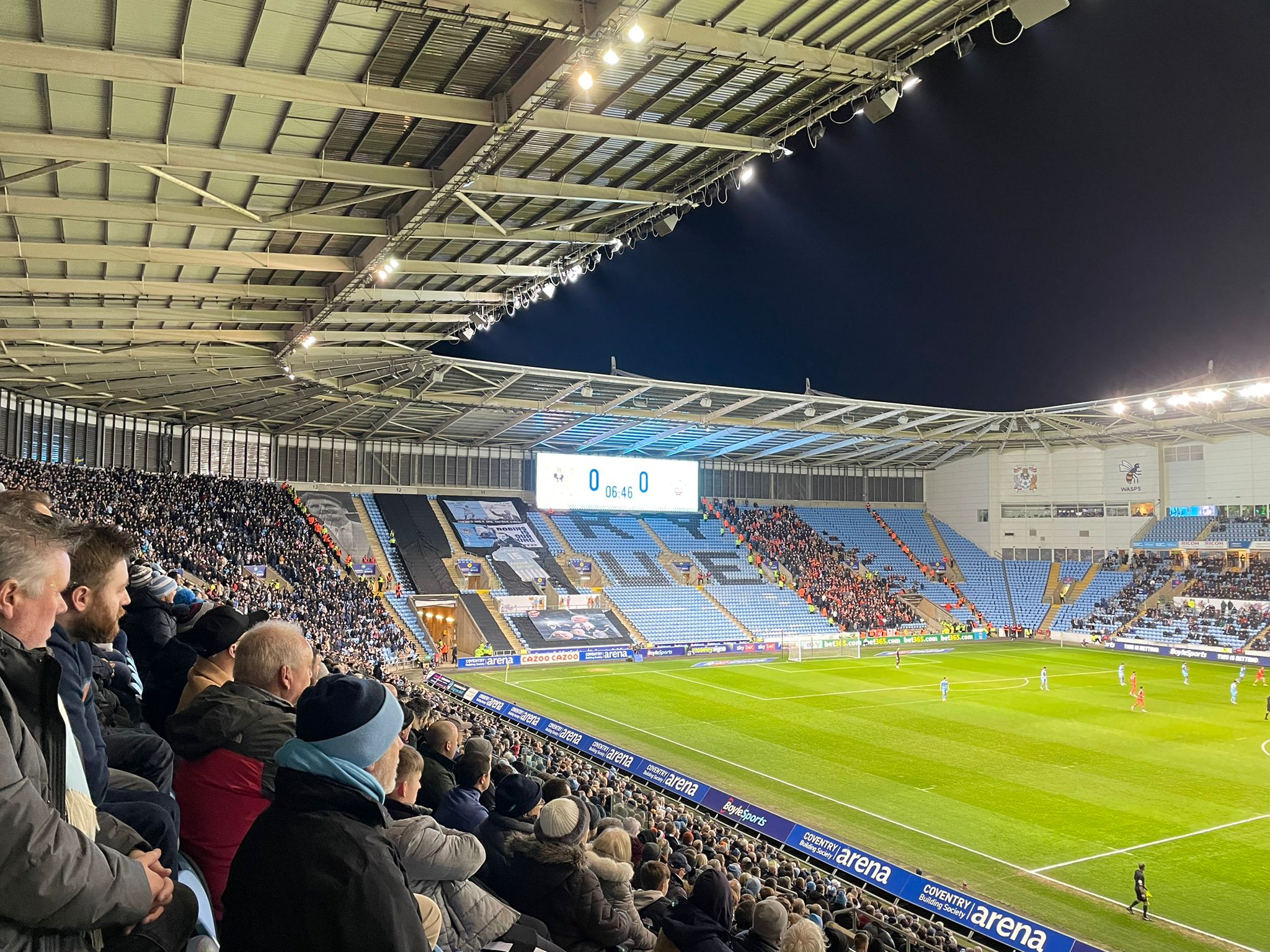 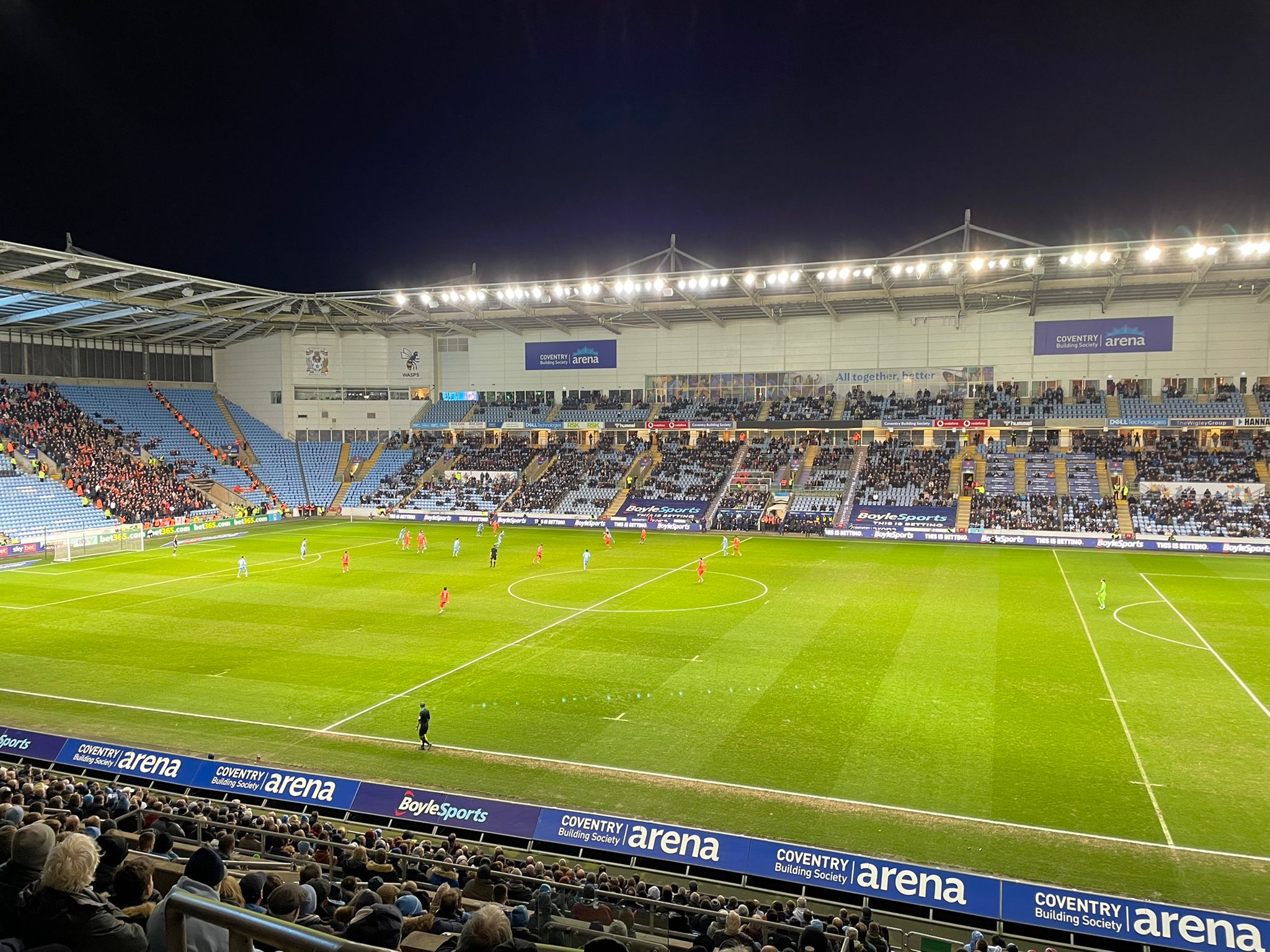 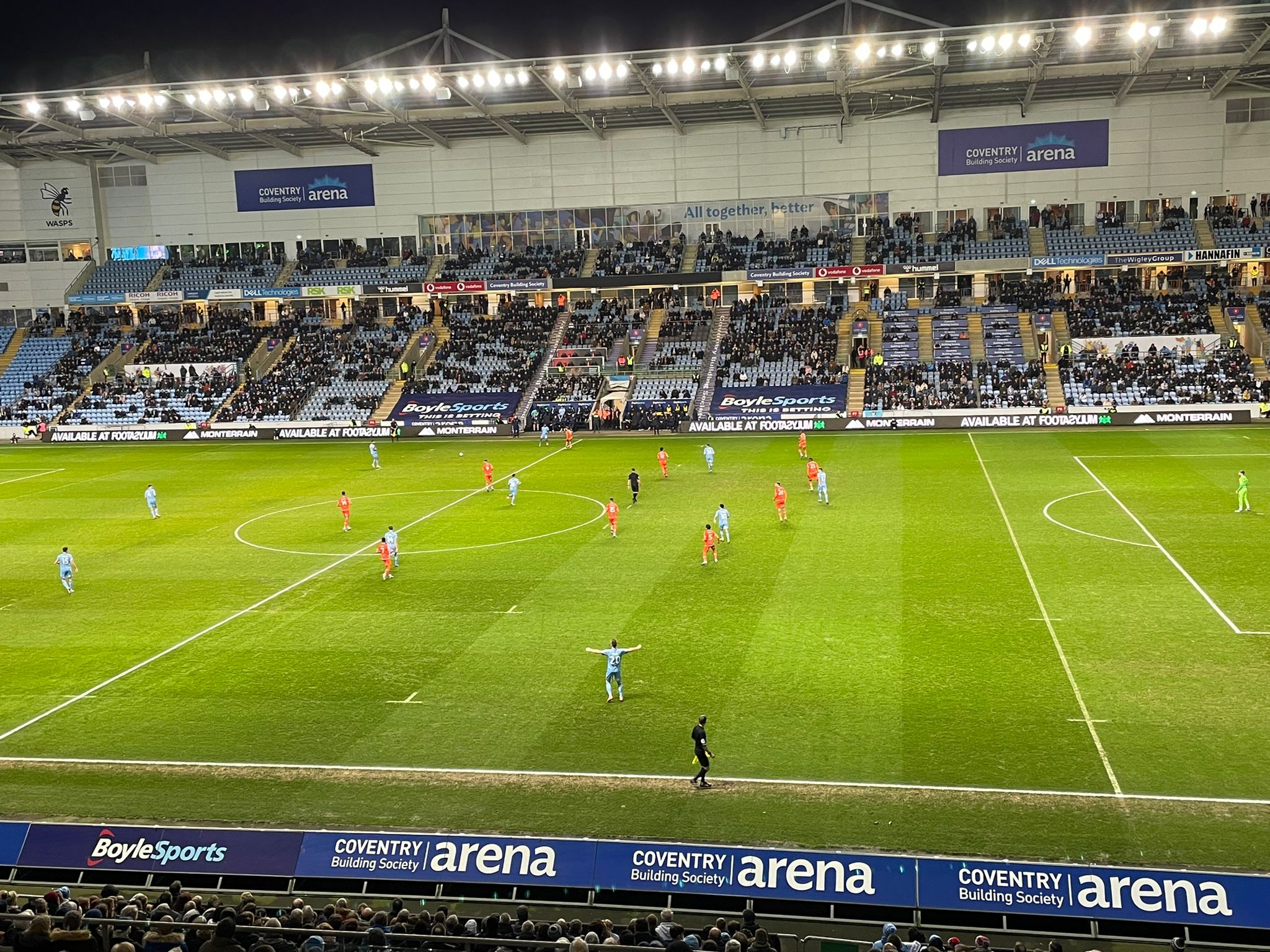 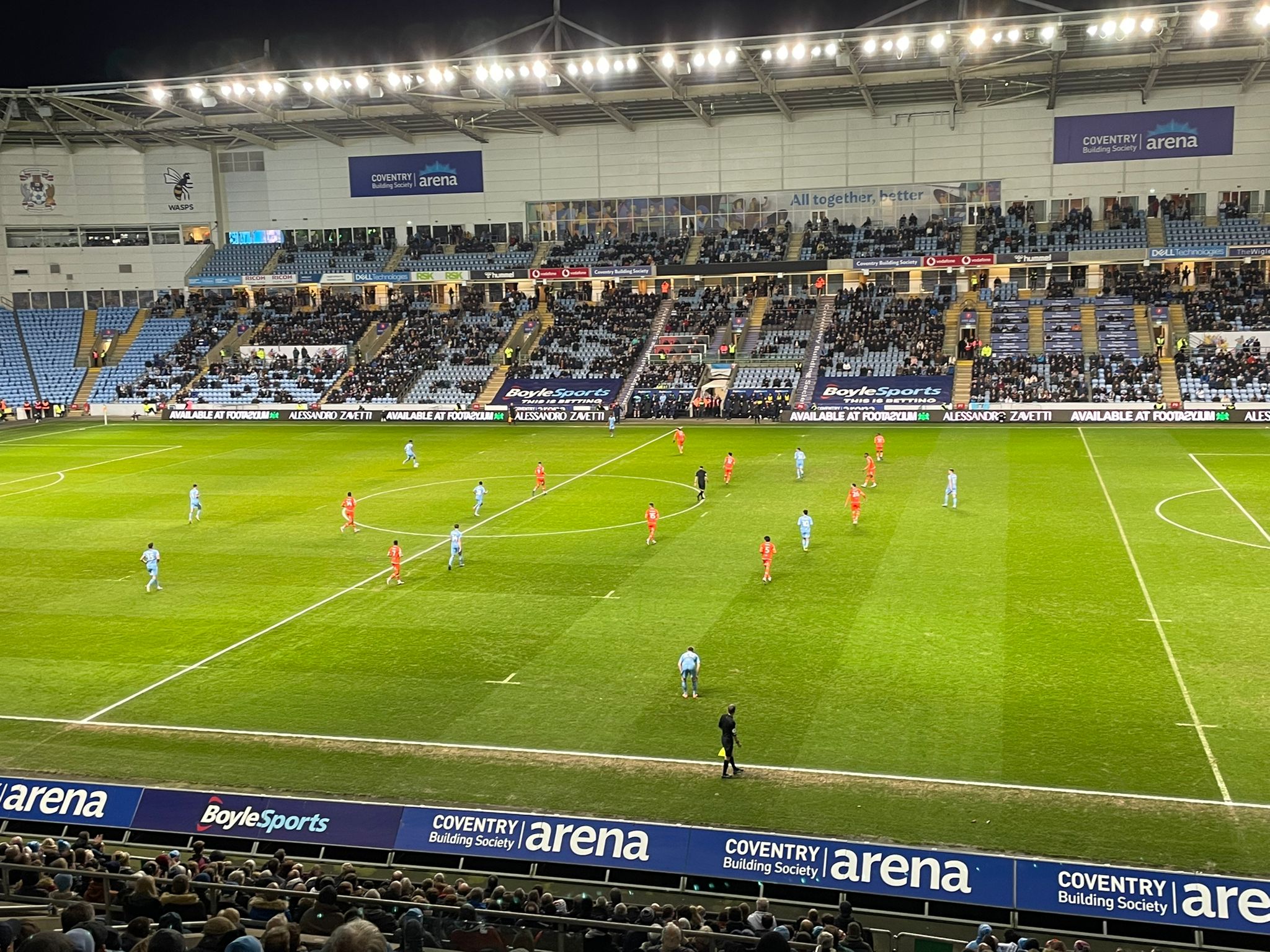 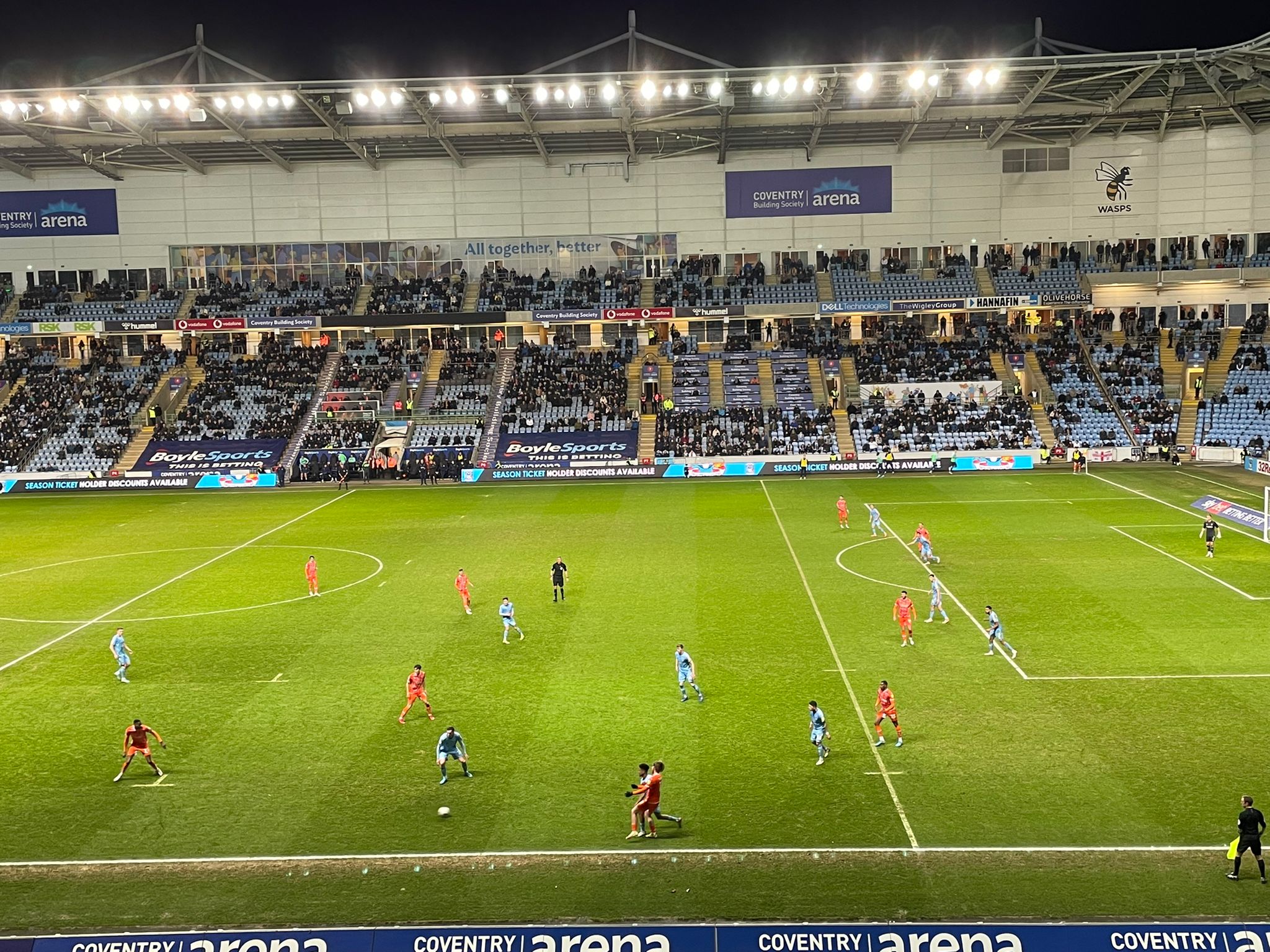