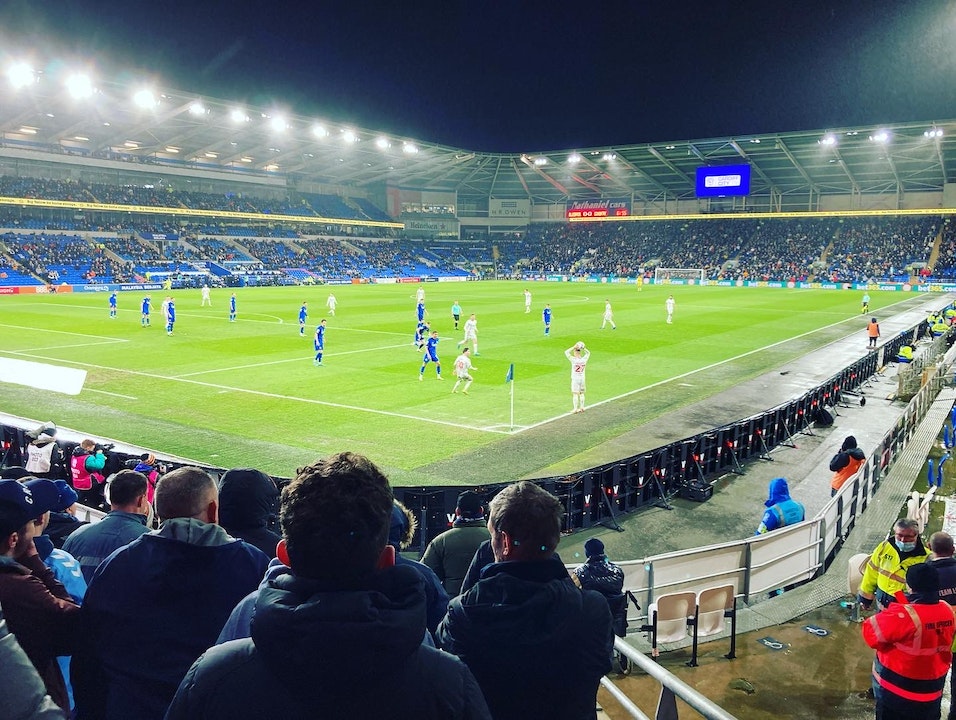 It’s been an eventful couple of days for me since our win away at Reading at the weekend. The following morning I played football for my Sunday team and ended up fracturing my ankle, after my foot went down a massive divot in the pitch! It was painful, and it brought an abrupt end to a commanding, Ben Sheaf-like central midfield performance from myself. I’ve been to hospital and been given a big black boot to wear, but this wouldn’t stop me from attending my first ever football match outside of England tonight!

This game should’ve taken place on Boxing Day, but due to COVID cases at Cardiff it had been re-arranged. Myself and Joe had bought tickets for the original date, and had hung on to them as we were still keen to go on a European away day even if it did have to be in midweek! My injury meant that we had to park at the ground though after making the drive across the border, and I also needed to sit nearer to the pitch than I would’ve liked to as I couldn’t get up too many stairs in the stands! Nevertheless though, we had made it and were ready to watch the Sky Blues in the typically Welsh rainy conditions. I’m glad I was still able to come despite Coundon Hall Park’s best efforts to stop me!

Mark Robins had made a couple of changes to the line up from the weekend - Ian Maatsen was dropped to the bench, with Jordan Shipley taking his place in an attacking midfield role beside Callum O’Hare. Jamie Allen came in beside Ben Sheaf after Gustavo Hamer had to miss out due to suspension. I felt confident that we would win tonight ahead of kick off - Cardiff are struggling this season and while we hadn’t been at our best against Reading, I was feeling optimistic about our chances as the win should’ve given us a much needed boost in push for the play offs.

The first half of the game was poor overall. Cardiff had an early headed chance which forced Simon Moore into a save - he just about kept the ball from crossing the line! Callum O’Hare looked fairly lively for us, having a run through the middle and shooting just wide in our first real opportunity of the game. Moments later, O’Hare went down inside the Cardiff penalty area twice - the first looked to be a dive, the second looked more of a foul but being at the wrong end of the pitch I couldn’t see whether there was enough contact to warrant a foul. The referee obviously felt O’Hare wasn’t fouled, as no penalty was awarded. It may have been a different game if one had though!

Neither of the two sides really created much in the first half at all. Cardiff seemed happy to sit in and let us keep the ball, but we couldn’t force a way through their defence often enough to cause any real problems. Viktor Gyokeres seemed like a bit of a passenger up front on his own in my view. Cardiff ended up making a substitution before half time in what was surely a tactical change - it’s a rarity in football to see a first half sub! Bringing Jordan Hugill on seemed to liven the Bluebirds up a little bit though, but it remained goalless at half time.

We had dominated the possession, but offered very little in the final 3rd which wasn’t promising to see. Neither side deserved the lead at the break as both had been quite uninspiring, although I did think that Callum O’Hare and Ben Sheaf were having good games for us (Sheaf usually does these days anyway!). Myself and Joe were speculating as to whether we would see another of football’s rarest beasts tonight as well - a substitute keeper coming on! Simon Moore had seemingly picked up a knock in the first half and Ben Wilson was warming up without his tracksuit bottoms on at half time (don’t be alarmed, he had his shorts and socks on!) - Moore returned to the field at the start of the second half though, so Wilson probably would’ve had to end up putting his bottoms back on.

Cardiff had the first real chance of the second half, after Michael Rose was robbed of possession inside the Cardiff half - Cody Drameh was able to burst away down the right, pull the ball back inside for Hugill who could thankfully on hit a weak effort towards Simon Moore. Had he connected properly, he should and most likely would have buried it to put the home side 1-0 up. Michael Rose was taken off a couple of minutes later with Jake Clarke-Salter coming on, in a like for like change.

Viktor Gyokeres had a nice chance for the Sky Blues at the other end - he managed to skip away from one defender, nutmeg another and was then brought down just outside the box. The free kick was in a great position for us, but Todd Kane’s effort was charged down in the end. We had a great spell of pressure around the hour mark which we really should’ve taken advantage off, but as has often been the case this season we couldn’t break Cardiff down to score.

Before we knew it, Cardiff had then taken the lead with around 20 minutes left to play. Joel Bagan cut the ball on to his right foot from the edge of the left hand side of our box, and then curled a lovely effort into the far corner where it beat Simon Moore all ends up. It was a moment of real quality and realistically, it was only something like this that would’ve made the difference between the sides tonight. It was a poor time to concede for us and meant we would have to chase a game that we had been in control of for the most part.

We had a couple of chances in our attempts to find an equaliser - Kyle McFadzean blazed wide after bringing down a ball on his left foot from a corner. Viktor Gyokeres had an absolutely golden chance after Callum O’Hare had curled a lovely cross into the box - Gyokeres was unmarked at the back post and did everything right except score! He headed the ball downwards, towards the bottom corner, but Cardiff keeper Alex Smithies got down to make a brilliant save - all credit to him! It was our best chance of the game and when it didn’t go in, I really lost hope that we would get anything from the game. It was that type of evening unfortunately!

We had a couple more half hearted efforts following this - Gyokeres and second half substitute Martyn Waghorn both hit shots from range, but neither troubled Smithies as they went wide. To add insult to injury we then conceded again before the 90 minutes were up - Cardiff forward Mark Harris was allowed in behind Jake Bidwell, ran at Jake Clarke-Salter and beat him, then hit a low shot across goal and into the far corner of the net. It was another well taken finish but seemed a bit too easy for the home side, and it almost felt like we had given up at this point. It capped off a poor night in Wales for the Sky Blues.

I don’t think Cardiff really deserved the win, but that’s football. They took the chances they had, we didn’t and we’ve come away with nothing as a result! We looked uninspiring at times and in truth it was a poor match - a draw would’ve been fair in my eyes though and I’m sure Cardiff fans wouldn’t disagree with that. Ben Sheaf and Callum O’Hare were our best performers for me, Sheaf in particular was excellent in the heart of our midfield but it’s all well and good dominating the middle - if we don’t produce in the final 3rd we won’t beat teams and that rang true tonight.

I think the play offs are beyond us now, unless we go on a magnificent winning run which doesn’t seem likely at all. We’re missing Matty Godden up front, he offers a lot more in front of goal than Viktor Gyokeres who I still maintain plays better with another striker up there with him. Things just aren’t clicking for us at the moment as they did earlier in the season but it’s nice to be mid table and still dreaming of the play offs, rather than scrapping for survival at the bottom as we were last year!

I’ve got to keep my boot on for 4-6 weeks, I hope I’m writing about our play off push when that time comes! Fingers (and toes, with difficulty) crossed. 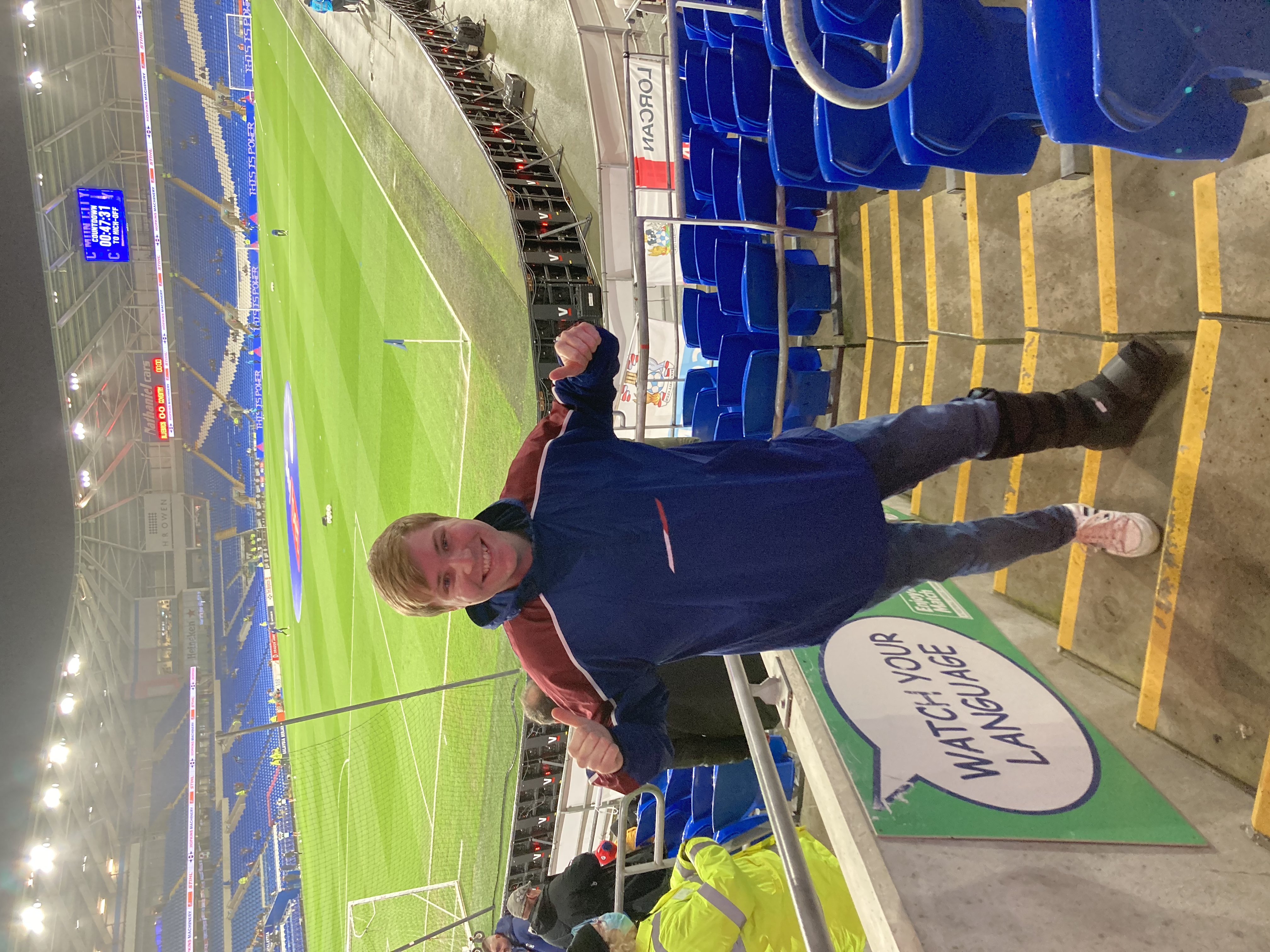 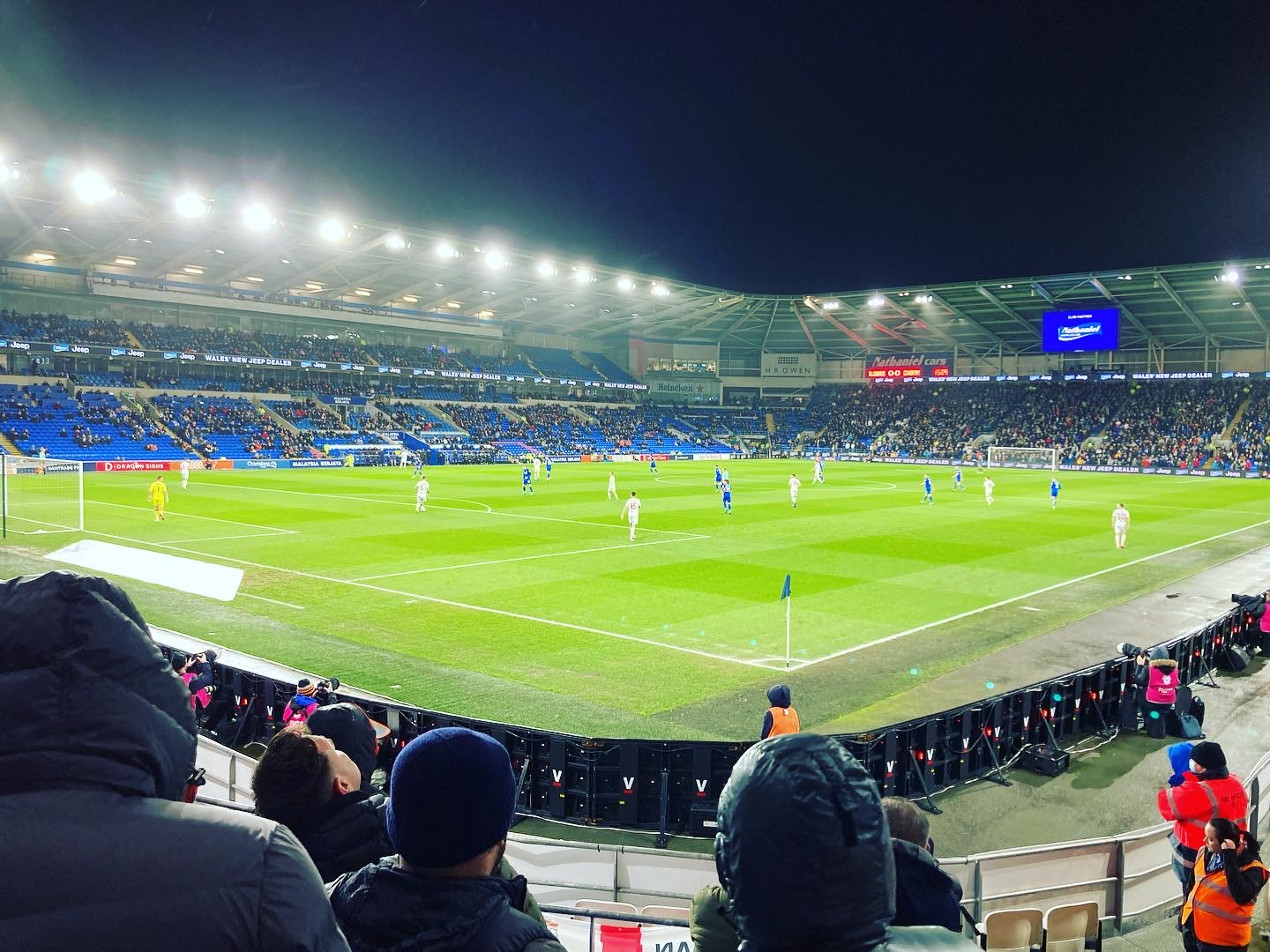 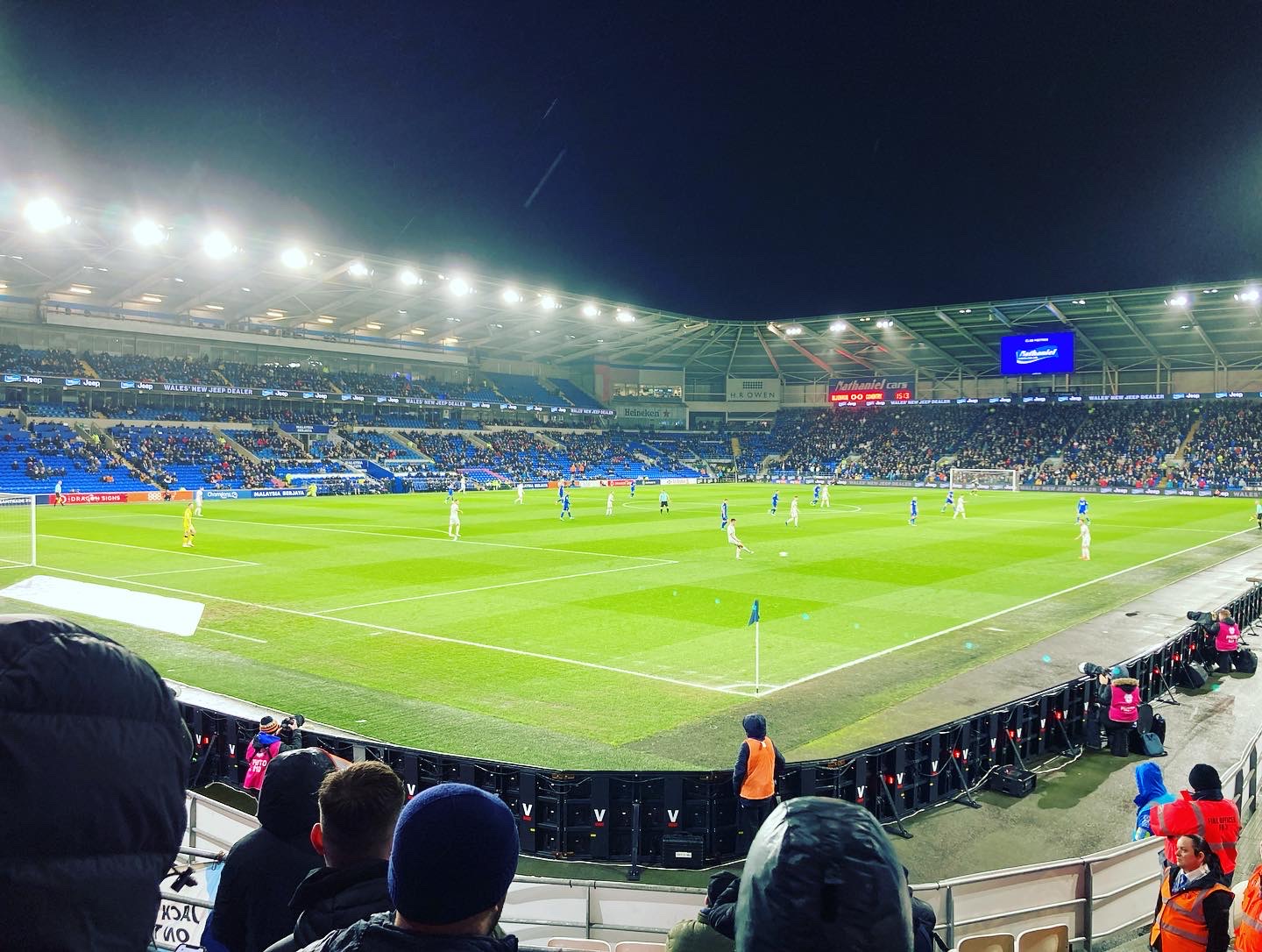 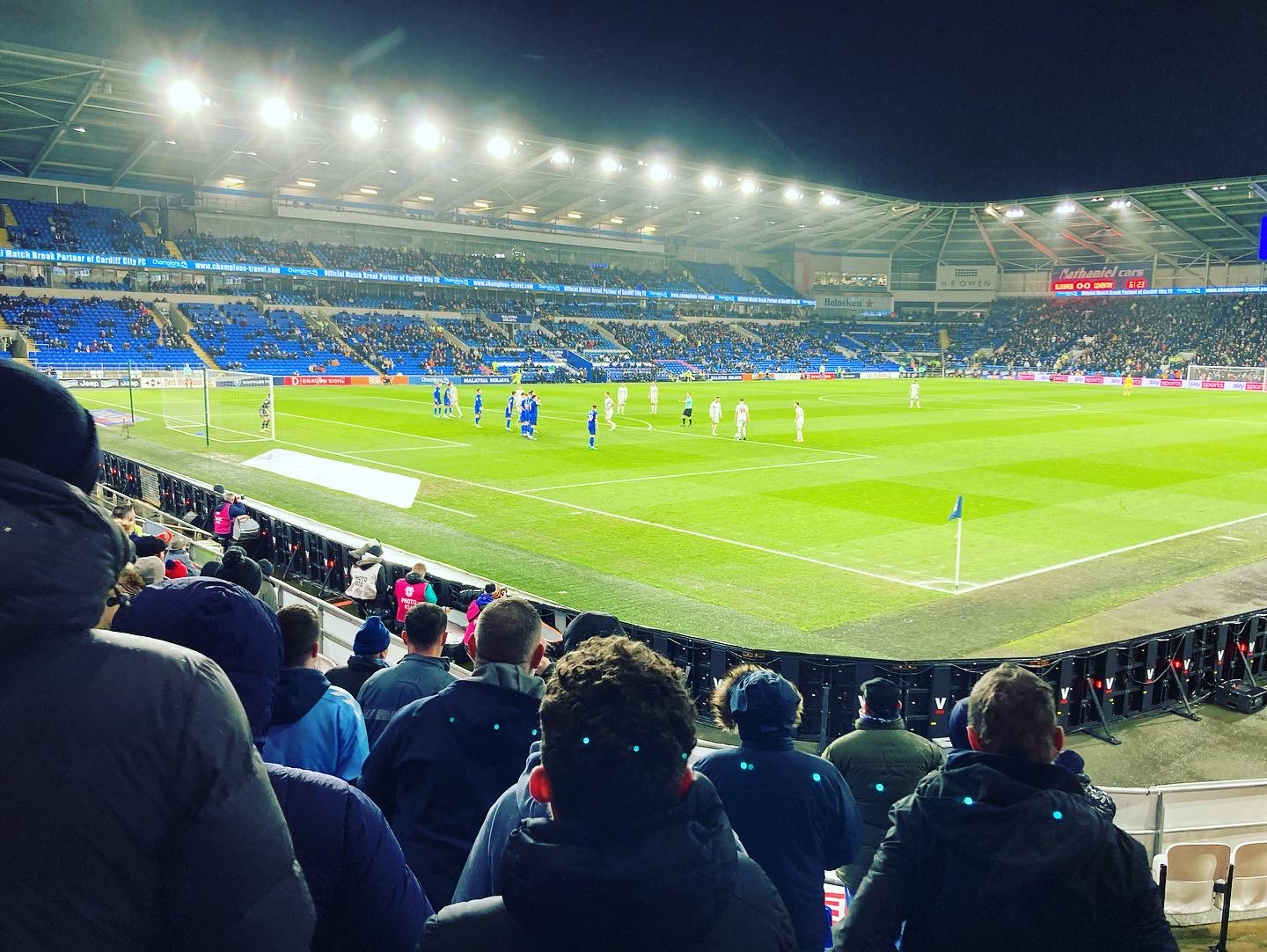 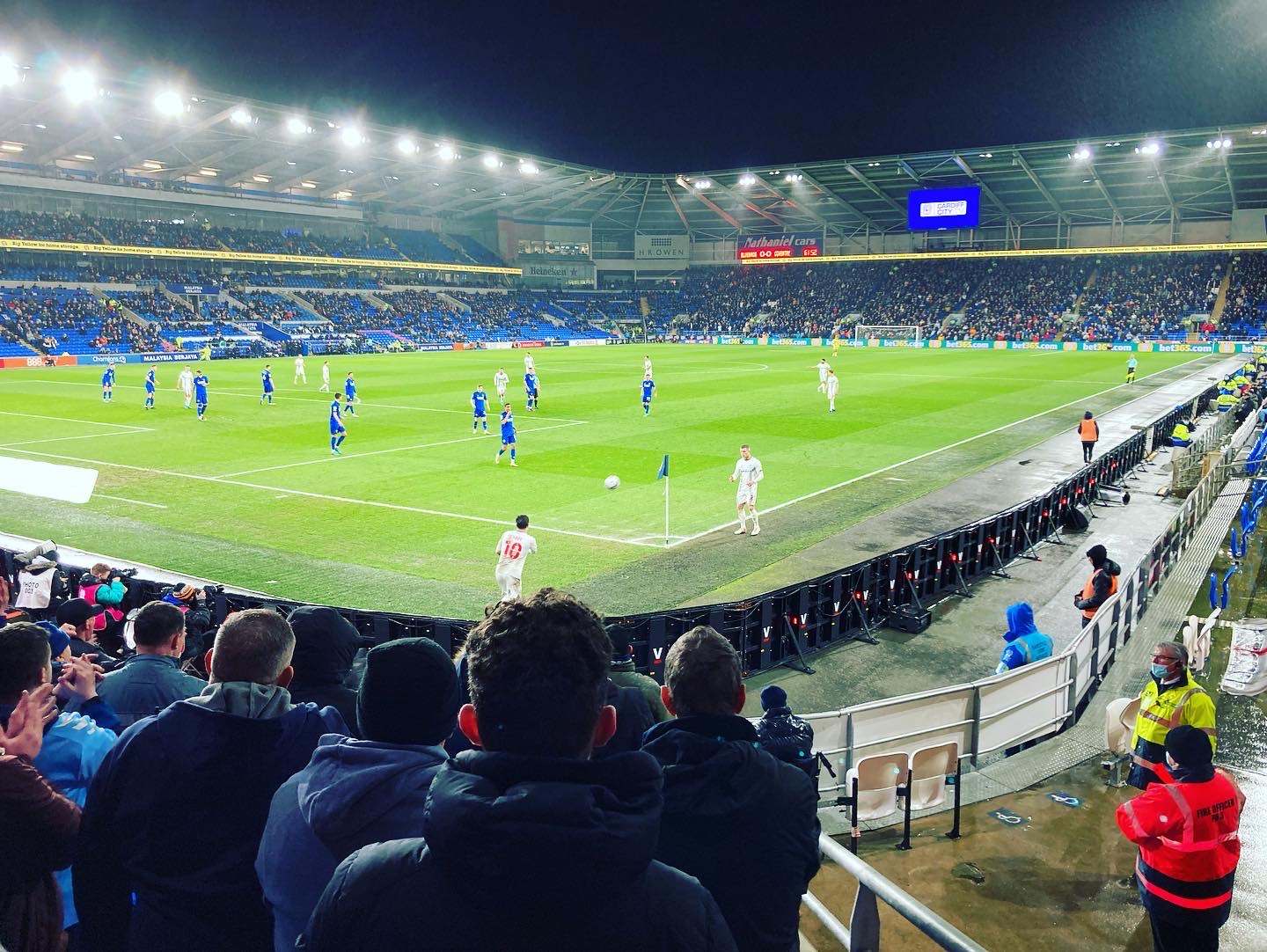 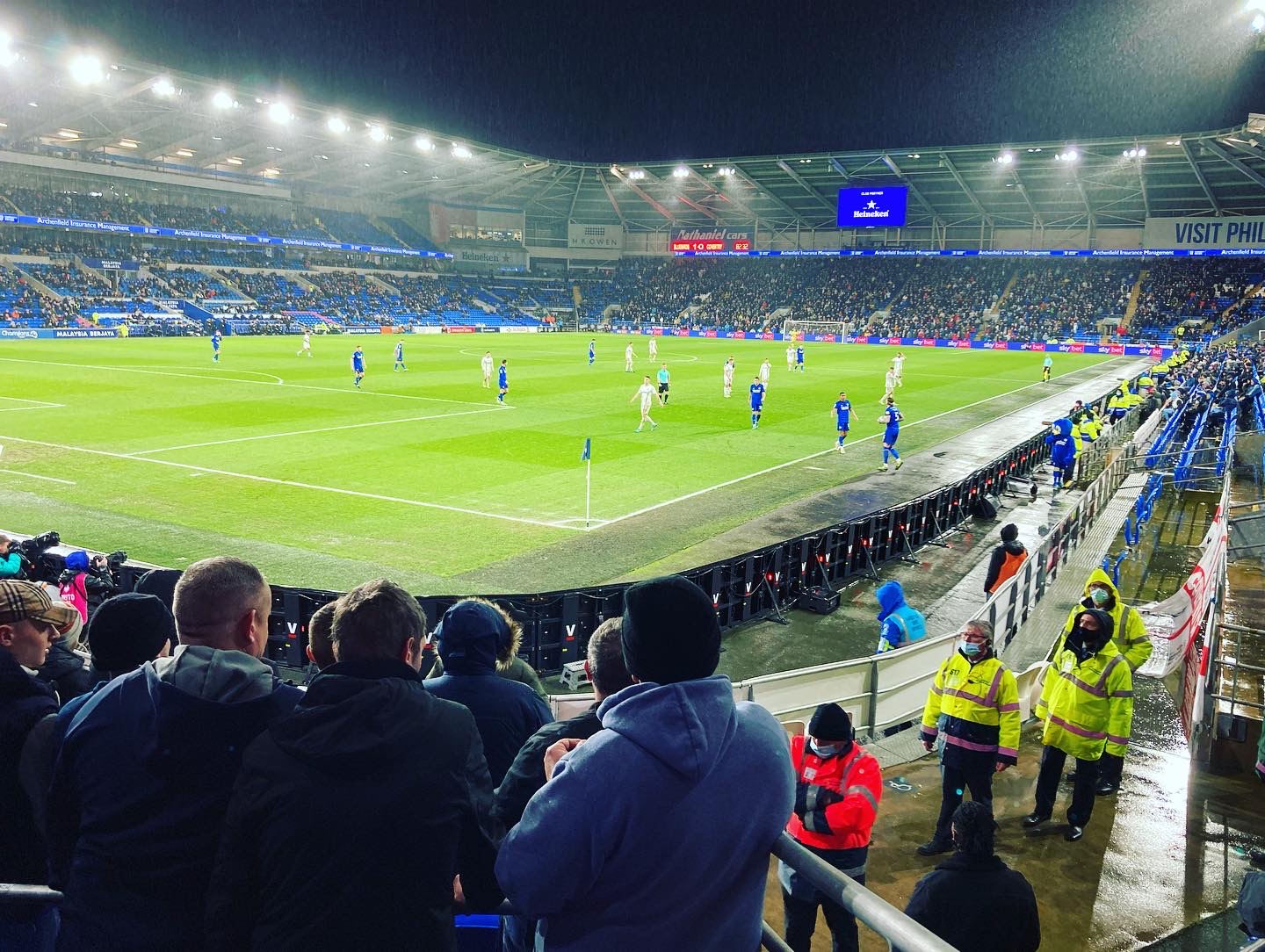