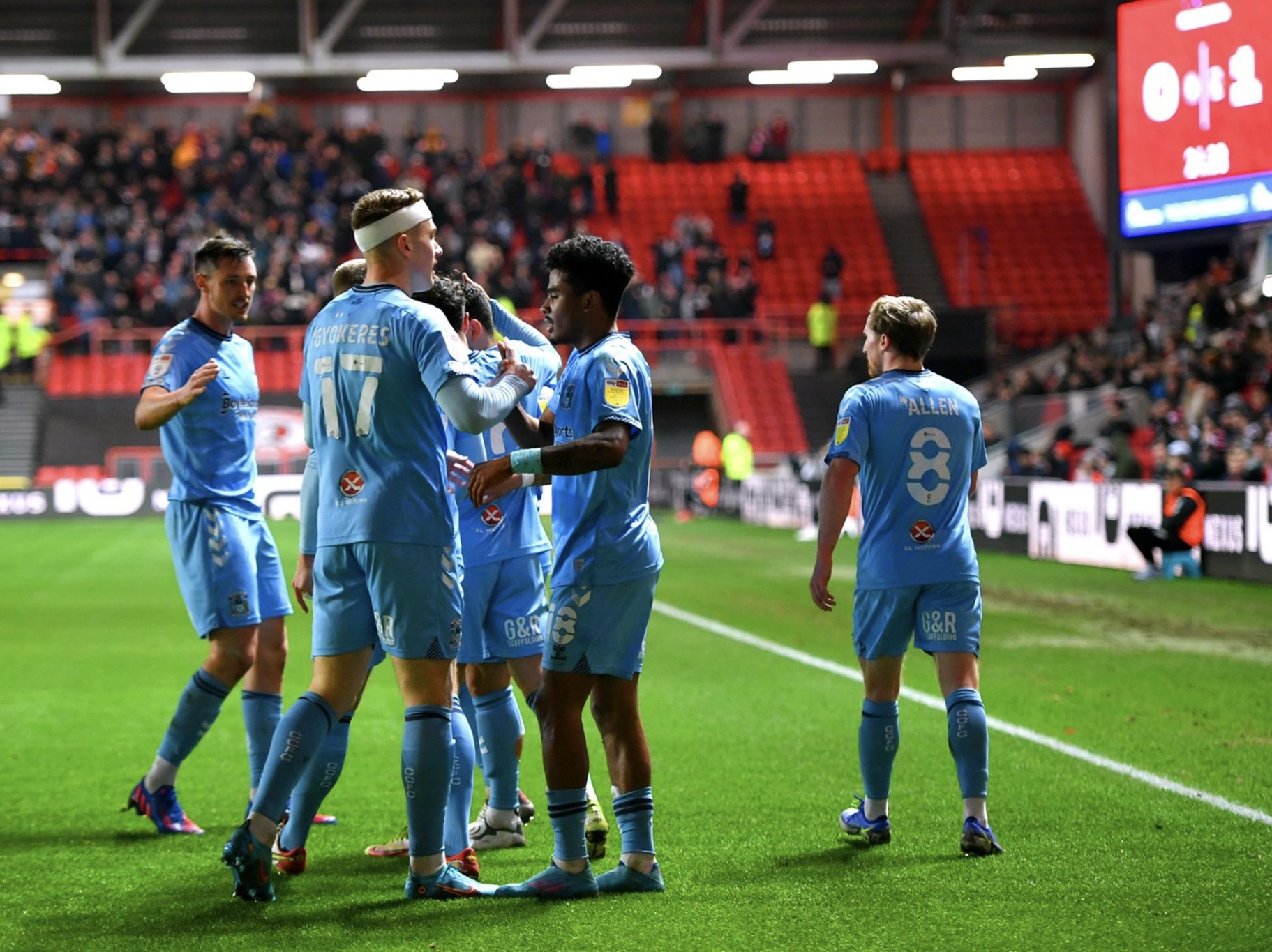 The Sky Blues travelled to Bristol tonight for another midweek away game, off the back of our defeat in Cardiff this time last week and our scrappy win at home to Barnsley at the weekend. I have to admit, I didn’t feel confident ahead of this one - Ashton Gate is normally a difficult place for us to go, and with our recent performances being a bit below par I could see the home side sensing a good opportunity to pick up points against us. I couldn’t make the journey down with the travelling Sky Blue Army tonight, so would have to resort to watching this one on TV.

Mark Robins had decided to switch back to a lone striker for tonight’s game, with Martyn Waghorn dropping to the bench. Ian Maatsen would be moved into an attacking midfield role alongside Callum O’Hare, with Jake Bidwell coming back in at left wing back. For me, the standout change when I saw our team was Ben Sheaf missing out, in favour of a Gustavo Hamer and Jamie Allen central midfield pairing - I can understand Hamer being re-introduced to the starting XI after his recent suspension, but I would’ve thought it would be Allen who made way for him and not Sheaf. Either way, it’s a solid midfield but Ben Sheaf rarely has a bad game these days, so I can only assume it’s just some rotation to save his legs. Everybody’s favourite youth prospect Fabio Tavares was on the bench again tonight - I’d like to see more of him after his cameo on Saturday!

I thought that the hosts had the better of the game in the early stages. They seemed hungrier for the all than us, looked more dangerous on the attack and it looked as if we would be in for a tough evening as I had predicted! For all their possession though, Bristol City didn’t threaten our goal too much - Simon Moore was forced to punch away an in swinging corner early on in the game, and he also made a relatively comfortable stop from the wild-haired Han-Noah Massengo, who hit a low shot towards goal from just outside the box around 15 minutes into the game. Moore was equal to it as the shot was pretty much slap bang down the middle of the goal, but Bristol City were definitely on top of us at this point.

One thing I did quite enjoy during this spell of Bristol City dominance was their long throw ins, courtesy of centre half Tomas Kalas. You don’t see a long throw in specialist every day, and it gave me fond memories of Stoke City’s Rory Delap absolutely wreaking havoc upon any Premier League side who visited the Britannia in the late 00’s, and our own long throw in expert Aron Gunnarsson. He was a great player!

I noticed that we seemed quite happy to sit off the home side and let them play - perhaps Robins had instructed the players to save their legs a little bit, and only really start to play when we naturally recovered the ball. After all, we have played a lot of football in recent weeks, so I can understand the need to conserve energy and not press high up the pitch. It was a moment of real quality from us that broke the deadlock, against the run of play truth be told - Gustavo Hamer was given time to get his head up, and float a lovely ball in to Ian Maatsen who had made a clever run in behind the Bristol City centre halves - Maatsen let the ball bounce and run across on to his left foot before drilling his shot hard and low back across goal into the far corner. It was a lovely finish, and just like that we had the advantage in a game that we had been second best in for the word go!

From here, we seemed to liven up a little and we got a better foothold in the game. We pressed a little more, there seemed to be more energy about our performance and while we didn’t threaten the home side’s goal, I thought we were the better side for the rest of the first half. We went into half time in front, and I was hoping for more in the second half as we had looked impressive since taking the lead. Hamer in particular was having a good game in the middle, Maatsen and O’Hare were also playing well and Viktor Gyokeres was putting himself about in his typical fashion.

As the second half started, it was evident that Nigel Pearson had given his side a talking to in the dressing room. Bristol City came out full of energy again, they looked sharp and didn’t allow us any time to play at all in the opening stages. Centre forward Antoine Semenyo was causing problems, and at one stage even rattled the crossbar with a strong header, after a free kick had been swung in from the right hand side. Simon Moore was well beaten by the header and we were lucky that it was just a bit too high - we were really under fire though and it didn’t seem long before we would concede an equalising goal.

Callum O’Hare had a glorious chance to make it 2-0, after he had dribbled his way through the Bristol City defence, cutting in from the left hand side. As is often the case with O’Hare, he did the hard part in beating his men but he then let himself down with the finish - it was a tame effort, straight at the keeper Daniel Bentley who saved it with his feet. A better finish and it would’ve been a wonderful goal, and a crucial one for us too! Sure enough, shortly after this the home side found a way back into the game - a cross from the left was headed back across goal by Andreas Weimann, and was met by Chris Martin who headed home unchallenged from a couple of yards out. On the basis of the second half alone, Bristol City fully deserved the goal and it was well worked, but could’ve been prevented with a bit of tighter marking from our centre halves I feel. We couldn’t have any complaints though, the way the game had been going they were always going to level the scores!

I actually thought we were in real danger of losing the game, having been second best for so long - Semenyo and Weimann were proving to be real thorns in our side, and with 20 minutes left on the clock Mark Robins hadn’t made any substitutions. Given that we were struggling, I would’ve thought a change would shake things up a bit, but Robins waited until the last 10 minutes to bring on Fankaty Dabo and Jordan Shipley in place of Todd Kane and Ian Maatsen. Just before the substitutions were made we had won a corner, which Gustavo Hamer swung in deep to the far post - Dom Hyam met it with his head, but the ball cannoned back off the post and out of harms way. Chris Martin had a big chance for Bristol City, with Semenyo slipping the ball through to him inside the area - Simon Moore came off his line quickly to smother the ball away from Martin in what was a brilliant bit of goalkeeping.

And then with only a couple of minutes left to play, Gustavo Hamer picked up possession just inside our half and set off on a counter attacking run through the middle - Hamer carried the ball up to the edge of the box, and then played a lovely ball to his left for Viktor Gyokeres. Big Vik opened his body up and took a shot with his right foot, first time, which slipped past Bentley and into the net to put us 2-1 up! It was a really good move, and the big Swede had ice in his veins as he finished it off to surely secure us all 3 points - massively against the run of play, but who cares? Of course, Bristol City had their chances in added time - Timm Klose had a header fly just wide of the post and Simon Moore had to be off his line quickly again to thwart Andreas Weimann, after another good through ball had played him in. Moore was out quickly and timed his intervention to perfection - had he been a second too late in diving for the ball, he would’ve surely made contact with Weimann and given away a penalty! Again, a brilliant piece of goalkeeping and it ended up being vital as we hung on for the win.

It wasn’t pretty, as none of our recent wins have been, but it’s a win. It’s a great result in the grand scheme of the play offs, as it leaves us just 2 points off 6th place and only 4 points off 3rd! We’re well and truly back in the mix now, and if we have to play poorly to win games then so be it. Bristol City can feel hard done by to be fair to them, I thought they played very well and deserved something from the game, but I’ve said that about ourselves too often this season to feel too sorry for our opponents when we shithouse a win against them. Gustavo Hamer was excellent all game, I thought that Gyokeres, Maatsen and O’Hare also all played well and Simon Moore really proved his worth in the second half. We’re lucky to have such a talented side!

The scrappy Sky Blues have won it late again!