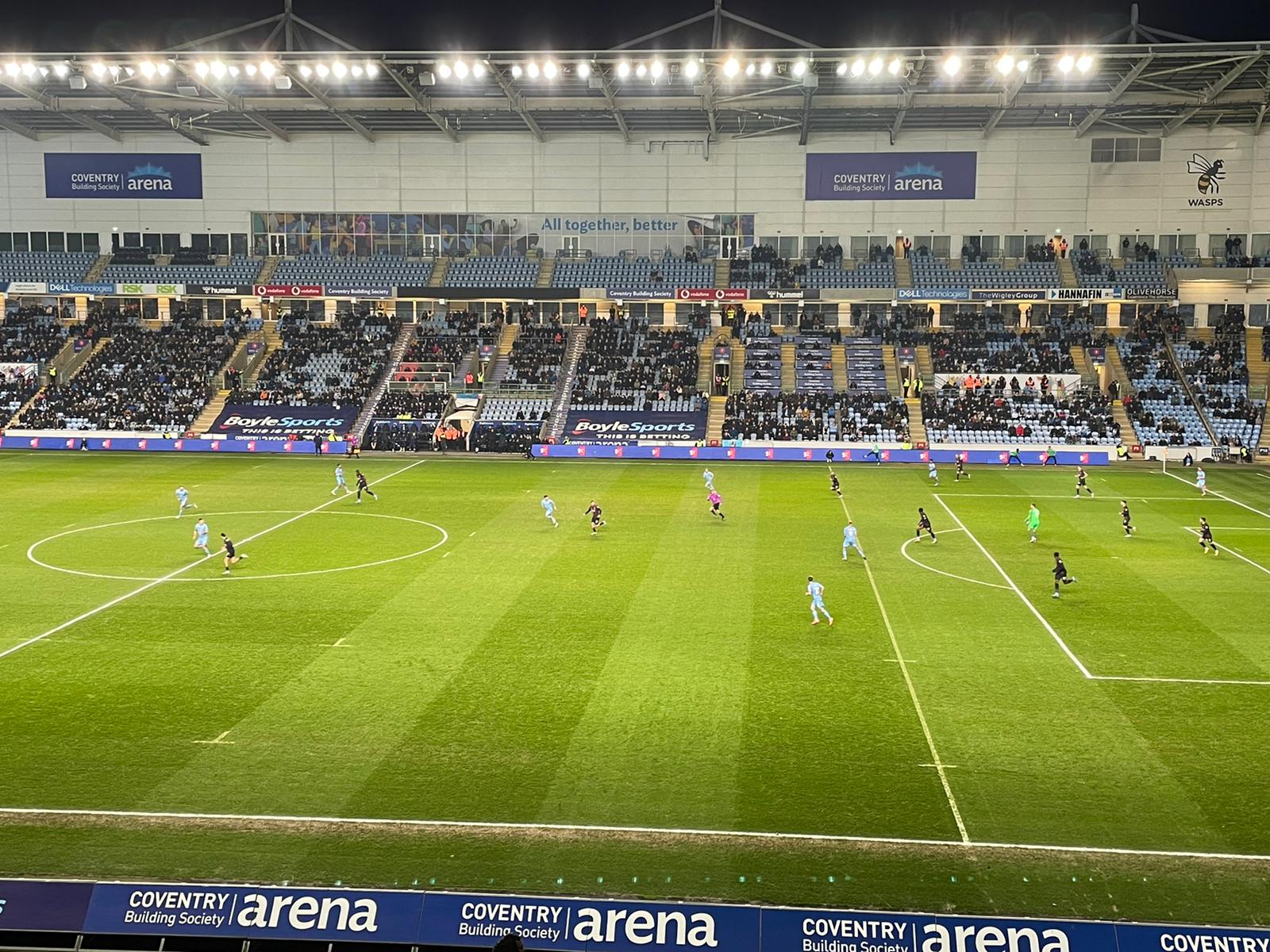 The Sky Blues faced Luton at home tonight in what would be a tough test for more reasons than one. Firstly, we were going into this game off the back of a defeat to Swansea at the weekend and a poor performance to boot, and secondly Luton completely annihilated us at Kenilworth Road earlier this season (the less said about that night the better!).

I felt it was imperative that we took at least a point away from this game, as another defeat would surely be a disaster in relation to our Play Off push. It would leave us around 6 points off the pace and with a difficult run of fixtures ahead in April especially, if we don’t take points in our next few games then we’ll probably end up in mid table, or in the top half if we’re lucky!

I couldn’t make it to the game tonight due to work commitments, which meant that I would have to race home after finishing at 8pm to see what I could of the game on iFollow. I did check the team news whilst at work though, and I was surprised to see that Mark Robins had named 3 centre forwards in our starting XI - Matty Godden would come in as well as Martyn Waghorn, with Viktor Gyokeres keeping his place too. This was an unusual way to set up, but Robins clearly wanted to add some firepower up front and starting Matty Godden seemed to be a good shout when it comes to adding a goal threat. My initial assumption was that Waghorn would sit a bit deeper than the other two, what with Godden and Gyokeres having a bit more running in them - I wasn’t confident that either Godden or Waghorn would last the full 90 minutes though, so it was pleasing to see attacking options on the bench in the form of Callum O’Hare and Fabio Tavares. Ben Sheaf was dropped to the bench in favour of a Jamie Allen and Gustavo Hamer partnership in midfield, and Ian Maatsen would switch to left wing back after starting further forward against Swansea.

I only missed the first 20 minutes of the game in the end, but by the time I had switched the game on I had heard that we had had two very decent chances already, Matty Godden having the best of them but scuffing his shot. This was promising, and by all accounts we had been the better side so far, but from the point I switched on it seemed to be a bit of a scrappy game. True, we had more of the ball but everything looked a little disjointed when we moved it around, and Luton were clearly beginning to grow into the game. Simon Moore had a comfortable save to make after a long range effort was hit virtually straight at him, and Luton shouted for a handball in the box after a shot from a long throw in was charged down, but thankfully the referee waved away the Hatters’ protests.

The best chance for the Sky Blues that I saw came when Gustavo Hamer broke through the middle, carrying the ball forwards and putting Luton on the back foot - he slipped the ball to his left for Viktor Gyokeres, who shot first time on his right foot but his effort didn’t really test their keeper Alex Palmer very much. Palmer would then have a big part to play in the deadlock being broken - he hit a long ball up in the direction of Elijah Adebayo, which wasn’t dealt with by Michael Rose. Adebayo took the ball under control and as he moved into the box, opened his body up and squeezed a shot past Simon Moore into the far corner.

I have to be honest, it was a great finish from the big man. The angle was very tight and I felt confident that Simon Moore would’ve smothered the ball away from Adebayo due to this, but he placed his shot perfectly. That being said, the ball should never have reached him - Michael Rose completely misjudged his header, under no challenge from Adebayo and he really should have done better. There’s no other way to put it really, that ball should’ve been headed away and I’m sure Rose knows that himself as well!

Adebayo’s goal was the only difference at half time, meaning we went into the break trailing 1-0 to the visitors. I don’t feel fully qualified to talk about the first half as I missed the opening 20 minutes, and knowing my luck we probably played our best football in that space of time. The game I had seen was a bit of a poor one, both sides were scrapping with each other and whilst we had looked on top, we hadn’t made it count and then conceded an easily avoidable goal. I was hoping for a much better display in the second half! We were certainly still in the game, a completely different story to the reverse fixture.

We began the second half quite well I thought, with plenty of football being played and Gustavo Hamer looking like he was running the show. Hamer had a free kick from around 35 yards out at one point, and elected to cross the ball in for the rising Kyle McFadzean who sadly couldn’t rise high enough to get his header on target. Ian Maatsen had an excellent chance after some tidy build up play from the Sky Blues - Maatsen was fed the ball on the edge of the box, cut it back on to his weaker right foot and then attempted to curl a shot into the top corner. It was a good effort, but just too high in the end.

As the half went on, Luton again began to grow and settle into the game a little more. Adebayo went close after a corner wasn’t properly dealt with, and the ball dropped to him - his shot would’ve stung the palms of Simon Moore as he pushed the ball away to safety. The ball actually came back towards our goal and was turned into the net, but the Luton player who did this was offside. Robins ended up taking Martyn Waghorn off and introducing Callum O’Hare in the number 10 role - this was a boost for us and O’Hare definitely made a difference to us once he had gotten on to the ball. Luton continued to threaten us though, and almost scored after a mazy run through our defence from Jordan Clark which seemed all too easy!

We had been the better side in the second half, but as usual we struggled to find a way through our opponents’ keeper. It’s been a common theme this season and one I think must make me sound like a broken record when I’m writing these blogs. Fabio Tavares replaced Matty Godden with around 12 minutes left to play, and he had an instant impact after a long ball up the pitch dropped to his feet having been knocked down (I’m not sure if this was by a defender or a Sky Blues player!). Tavares carried the ball forwards to the edge of the box, where he then took what looked like a heavy touch - Callum O’Hare pounced on the loose ball and hit a first time shot at Palmer, but the keeper saved it relatively easily.

Luton didn’t really have to try and score again throughout the whole second half, they simply just needed to keep us out and try to punish us if they got a chance to. Ian Maatsen had another massive chance right at the death - Todd Kane swung in a deep cross which evaded everyone and ran through to Maatsen at the back post, however his stooped header hit the side netting. It was to be the last attack of the game, and in the end it’s Luton who’ll be leaving with all 3 points. I can’t say that they wholeheartedly deserved it, but we hadn’t done anything tonight that wins you football matches and that’s the difference between us and other sides around us. We’re not clinical enough and it shows!

We need to sign that Adebayo in my eyes - he’s big, powerful, and he knows where the goal is! And it would stop him from scoring against us of course. I doubt it’ll happen, but I think he should be one of our targets in the summer if we’re looking at bringing in another centre forward!

It’s another game to forget about for the Sky Blues really, and one that we need to move on from quickly. We have Sheffield United at home on Saturday which will be another difficult game, as they are a side that’s currently on a decent run of form! I doubt we’ll see the same front 3 as tonight, which wouldn’t be a bad thing if we revert to type, but there’s the potential for another frustrating game if we can’t put the ball in the net. It’s a shame, but it’s our biggest weakness right now alongside making silly defensive mistakes.

Fingers crossed we can mark Legends Day with a victory!

Joe was on photo duties again tonight - many thanks! 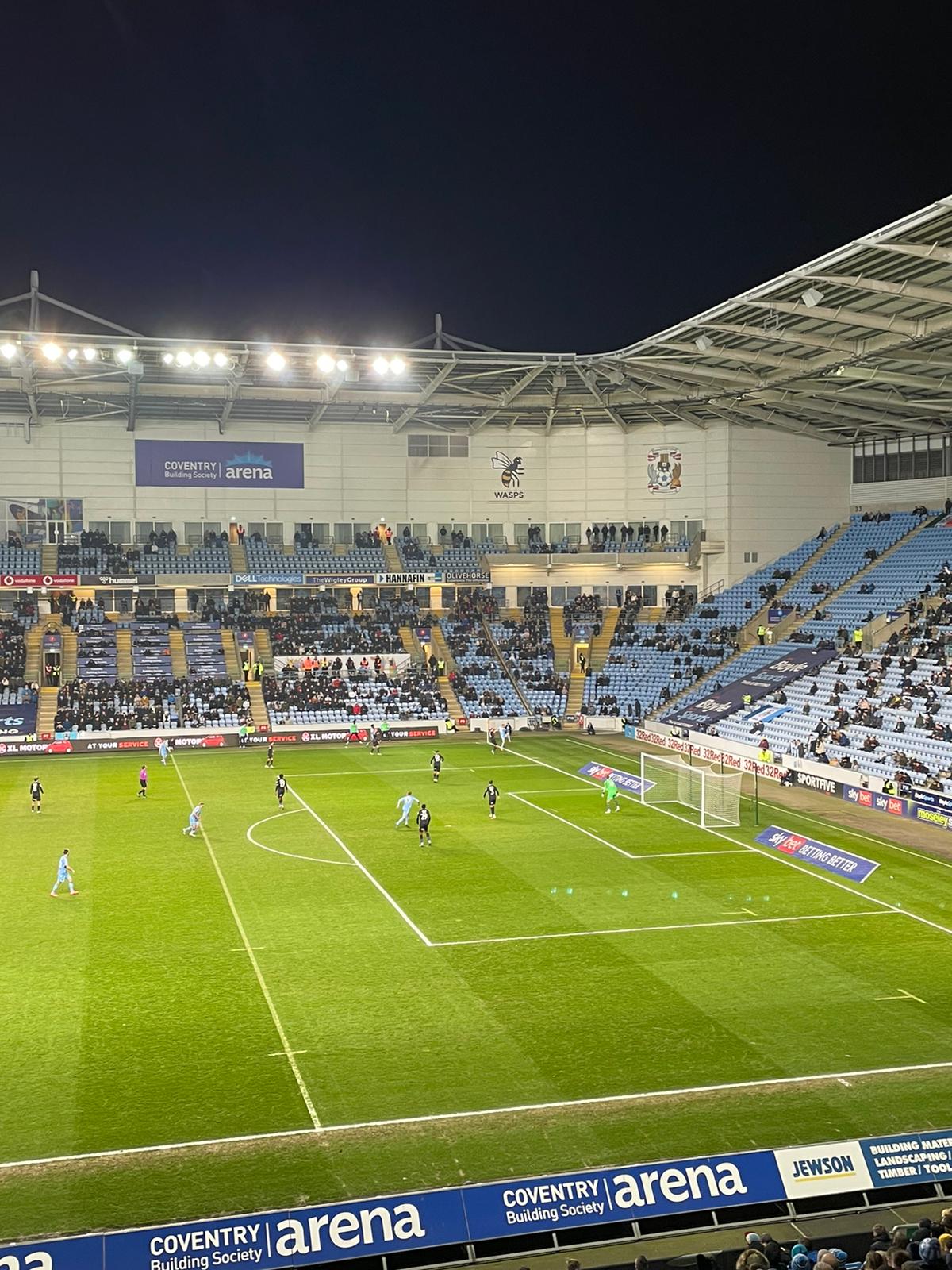 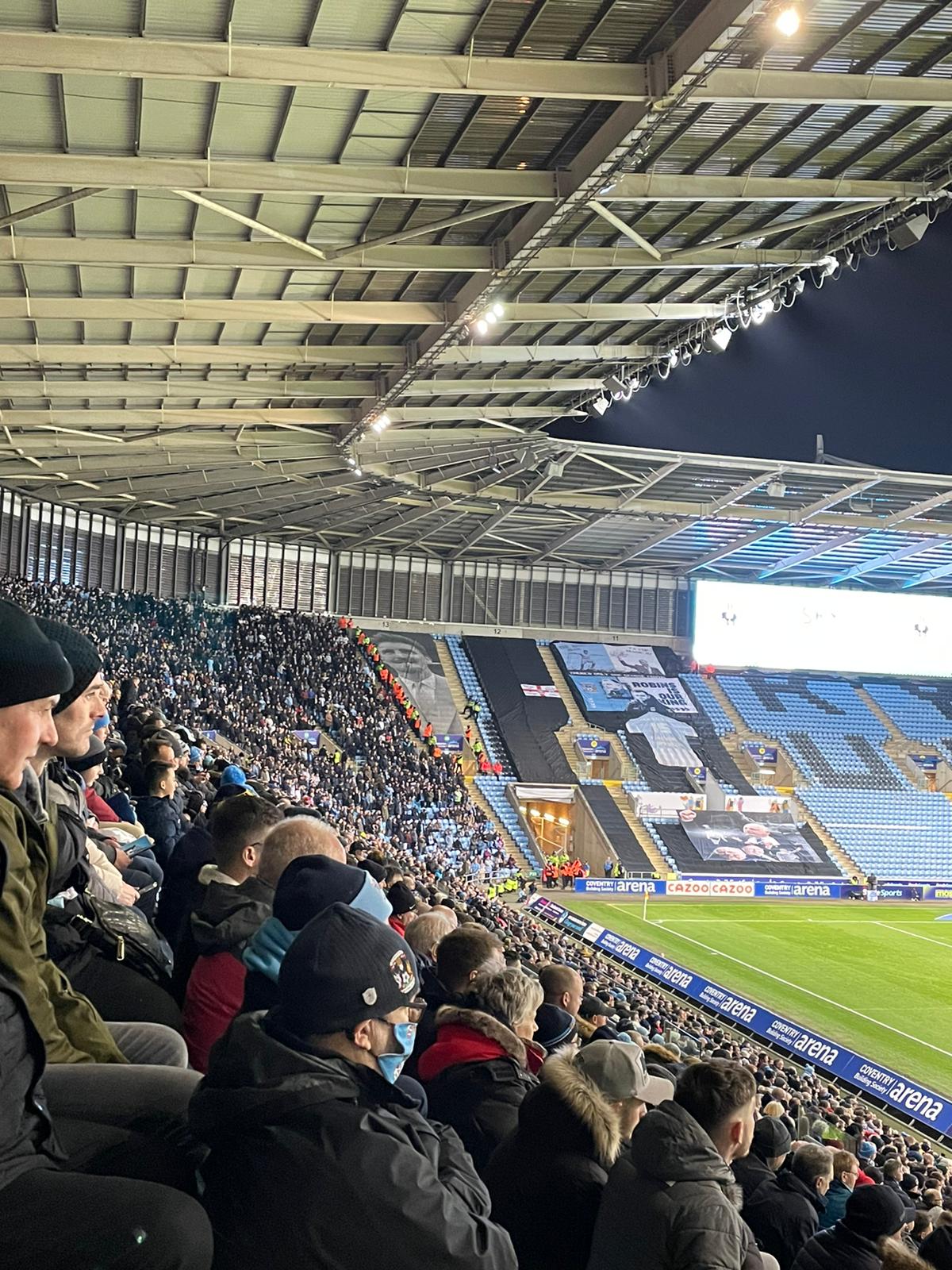 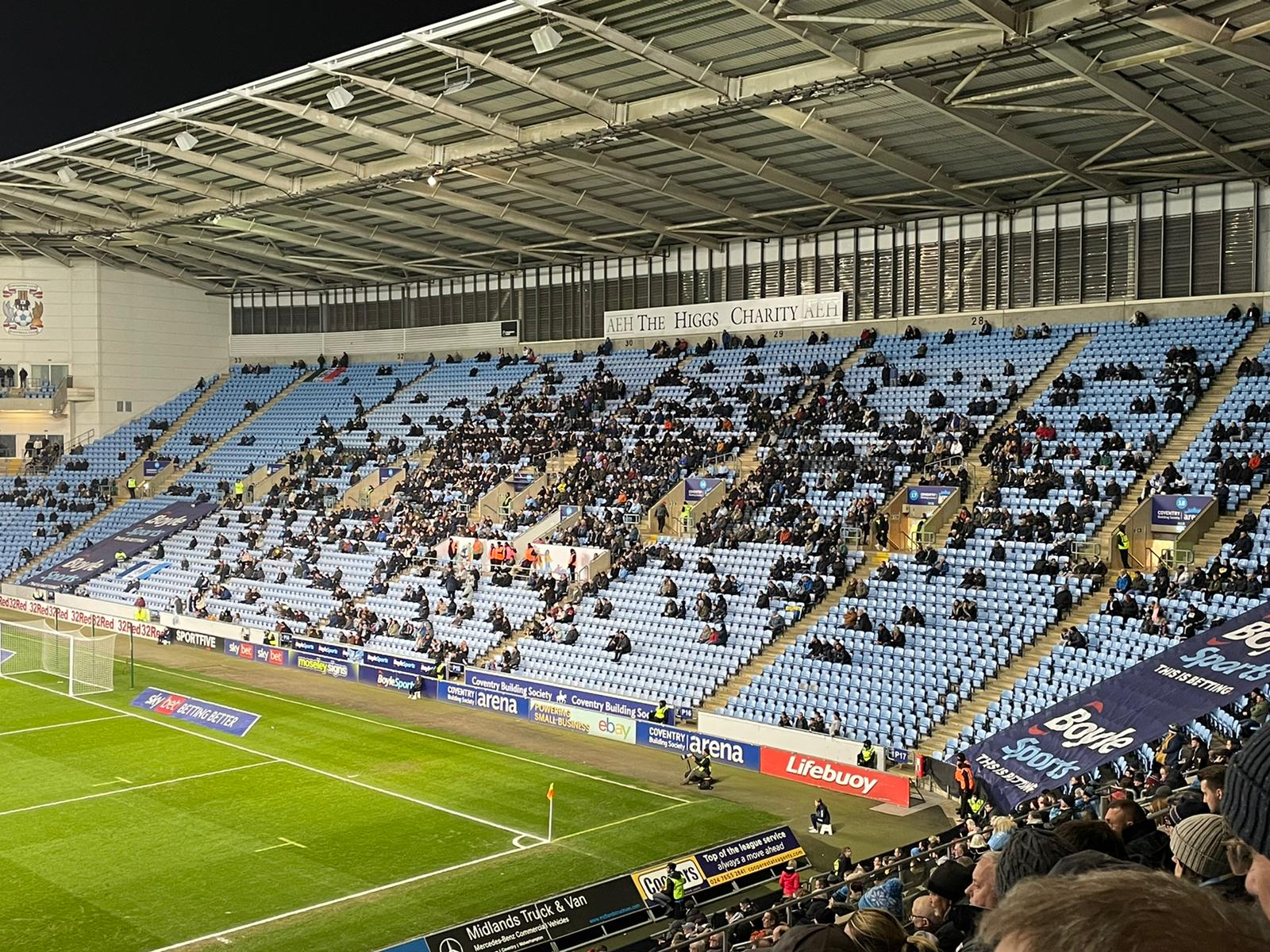 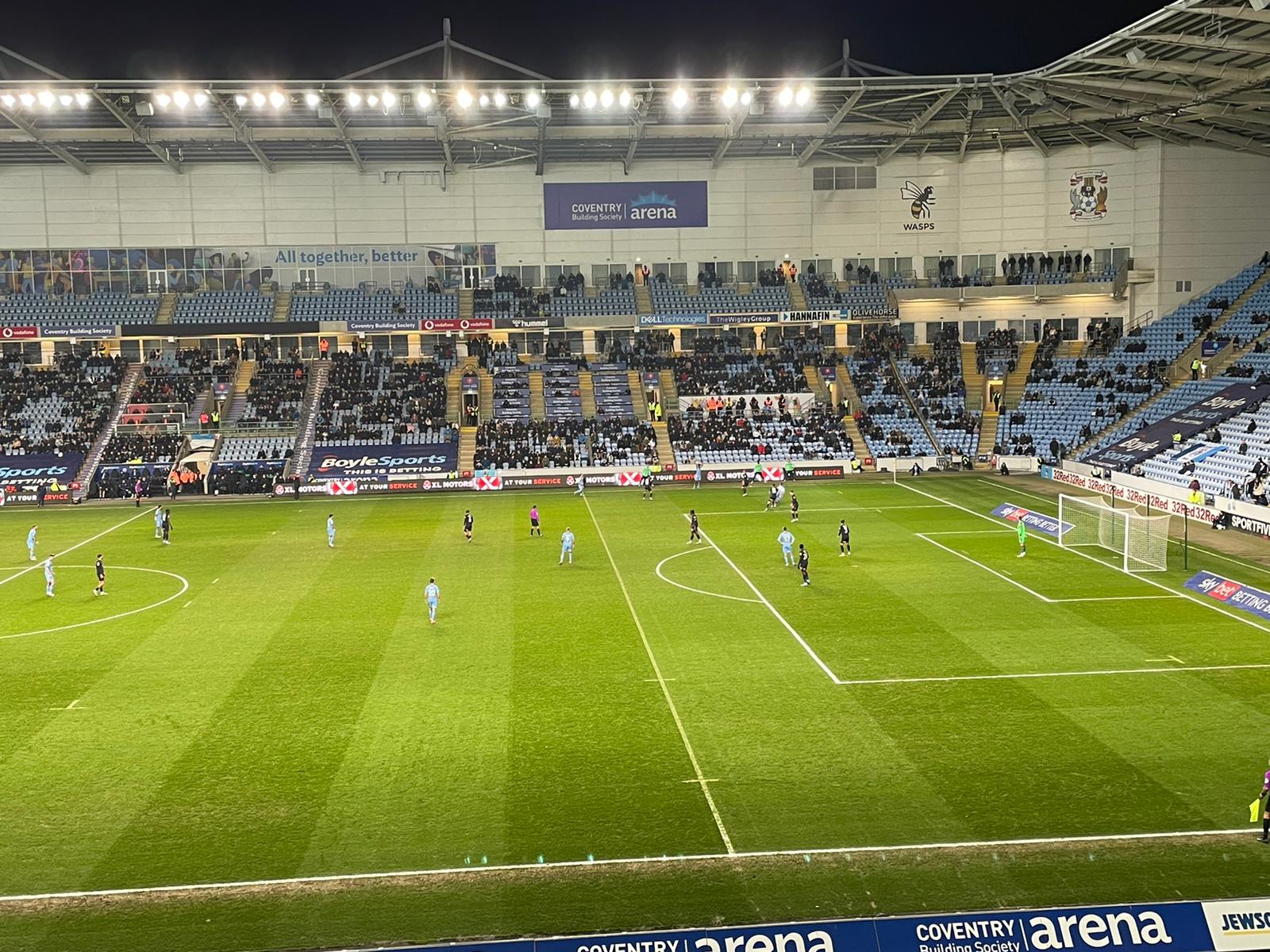