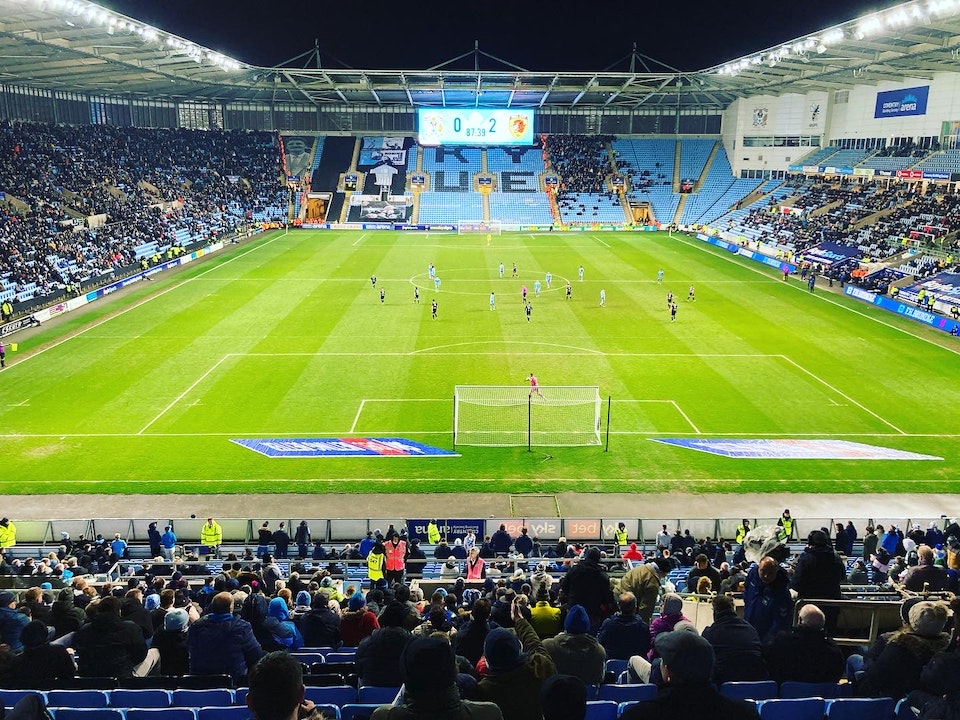 It was an absolutely horrible day today - torrential rain pretty much all day in Coventry, and I couldn’t help thinking that this would be a bad omen for the Sky Blues at the CBS tonight. On paper Hull shouldn’t really have offered much in the way of a challenge to us, especially after our brilliant performance at the weekend - but there was just something in the air telling me it wasn’t going to be our night.

COVID still appears to be in the air around the Sky Blues dressing room, or within the back room staff at least. Dennis Lawerence, who led the team in the absence of Mark Robins and Adi Viveash on Saturday, would end up having join them in missing out on tonight’s game (get well soon all!). Luke Tisdale would instead lead the Sky Blues - again, I’m not sure whether Robins has picked the team or not, but we had only made two changes to our starting XI against Sheffield United - Kyle McFadzean and Michael Rose were missing, with Ben Sheaf and Dom Hyam replacing them. It looked like Sheaf would be playing in the back 3, with Hamer and Allen in the midfield again and Godden and Gyokeres up top. This was an interesting move, and I can only assume we had no other choice but to play Sheaf there as the bench looked quite thin in terms of defensive options, and switching to a back 4 poses it’s own risks. Sheaf has played as a centre back previously though, so it wouldn’t be totally alien to him.

I was finally able to get back up to my preferred area of Block 29 to watch the game tonight, after having to sit closer to the stairs at previous home games in the last month due to my ankle injury. It was good to be back where I belong, and to be joined by my mates Callum and Mark for the evening too - my seat wasn’t as comfortable as the padded one I had watched us dismantle Sheffield United from (see my previous blog for more details!), but you can’t have it all can you?

The first half started terribly for us - we were 1-0 down inside the first 5 minutes, with Simon Moore letting what looked like a relatively routine effort from Richard Smallwood slip underneath him and into the net. It was an error, the kind that you don’t see Moore make very often at all! Sadly it set the tone for what would be a frustrating and tedious game under the lights - what was I saying about it not being our night?

I actually thought we were the better side for the next 10/15 minutes following the goal. Gustavo Hamer was a cut above the rest on the pitch, spraying passes left and right from the centre of our midfield. We had a lot of the ball, but couldn’t really do anything with it and as time went on, we got sloppier and sloppier. Frustratingly, referee John Busby seemed to want to do us no favours at all - Ian Maatsen broke clear in the Hull half at one point, about to be through on goal after picking up the loose ball when Callum O’Hare had been fouled, but Busby pulled the game back for the foul and didn’t play advantage. It was a bizarre decision, and unfortunately it wouldn’t be the last we’d see tonight!

We looked like we were panicking every time Hull got forwards - Tom Eaves was absolutely bullying Ben Sheaf in the centre of our defence, and Hull went close to doubling their lead on a couple of occasions. One was a ball across the face of goal which didn’t reach Eaves in time for him to poke it in, and the other came from a misplaced pass from Dom Hyam on the half way line - Hyam gave the ball away cheaply, his pass intended for Fankaty Dabo going straight to the attacker and putting us on the back foot. Keane Lewis-Potter would then bring the ball inside and shoot from the edge of the box, forcing Simon Moore into an acrobatic save to tip the ball wide for a corner. Hull were knocking on the door despite all our possession, and sure enough from the resulting corner they had scored again. The ball wasn’t properly cleared and only dropped to Ryan Longman, who was allowed to take a touch and let a shot fly towards goal. It cannoned in off the underside of the bar, and just like that we were 2-0 down. I’ve only one word for it - poor.

There didn’t seem to be a great deal of urgency in the way we played. Our defenders seemed happy to pass the ball amongst themselves, side to side across the pitch and we didn’t appear to have any sort of plan besides try and dance around defenders when we got towards Hull’s penalty area. Callum O’Hare had the best chance for us, turning inside on to his left foot to leave his man for dead, but he could only shoot straight at the Hull keeper Matt Ingram. I wasn’t sure why we were trying to walk the ball in when we were chasing the game - against Sheffield United we had been more direct, not afraid to kick the ball long up towards our centre forwards and to get in behind the defence. This option wasn’t really explored at all by the lads today, and I can’t understand why after it had been so effective on Saturday!

To be trailing 2-0 at half time at home to Hull felt a little embarrassing. As harsh as it sounds, they’re nothing special and we should have been beating them comfortably in my eyes, but we had made things far too easy for them and we’d not looked like we wanted to be there at all. Hull hadn’t needed to want to win much more than us, our players looked disinterested at times - Fankaty Dabo was guilty of doing a bit of a walking rather than running to close people down, and Dom Hyam had given the ball away at almost every opportunity. We needed massive improvements in the second half, to restore some pride if nothing else!

We did start the second half brightly, moving the ball a little more quickly and creating a brief chance for Matty Godden - the ball was crossed from the right which Godden got to at the near post, but his effort was turned just wide of the post for a Sky Blues corner. Simon Moore had been kept busy at the other end too in spite of our improved spell - Moore had a good save to make to his right, after Tom Eaves had bullied Ben Sheaf again and got a shot away with his left foot. I felt the game was crying out for a bit of a spark, some hunger to try and get something - Fabio Tavares and Jordan Shipley were introduced to try and shake things up a bit with around 20 minutes left to play. The Sky Blues kept pushing for a goal, with Godden having a shot from the edge of the box after working the ball on to his right foot - the shot was headed away off the line by a defender and out for another corner. You can tell that it just wasn’t going to be our night!

I was surprised to see Gustavo Hamer also taken off, with Martyn Waghorn introduced - desperate times call for desperate measures as they say. Hamer had been our best player on the night for me, so it was a surprise to see him taken off - Waghorn isn’t what I’d call an impact substitution either. I had really wanted to see him do well at the club when we signed him, but he’s certainly not an impact sub and I’ve not been impressed in recent games I’ve seen him start in.

Alas, a frustrating night would come to an even more frustrating night for Coventry City. Fabio Tavares had picked the ball up in the box and skinned his man, then played a quick pass to avoid the oncoming defender and was wiped out by the defender when he reached him - it looked to be a clear penalty for me, but Busby waved away our protests and play continued. We had a great chance to pull a goal back through Ian Maatsen, who had picked up the ball at the back post. Maatsen’s drilled effort was saved originally, but the ball bounced back off a defender and clearly then crossed the goal line.

It was a good few inches over the line, I feel confident that everyone in the ground could see that too. Busby waved away our protests again, giving nothing, and capping off what was a poor game and an irritating one for us. I’ve seen the replays since via Twitter - if you’re reading this and you haven’t seen how far over the line that shot was before it was cleared, please watch the video - the ball was clearly over and the fact the goal wasn’t given hurts, I can’t lie. I’m not saying we would’ve gotten anything from the game at that point, but it’s the injustice of the goal not being given that really annoys me.

The fact is though that below par officiating aside, we weren’t good enough. We were poor, lacklustre and annoying to watch throughout. We’ve got to improve massively if we have any chance of reaching the Play Offs, and it’s frustrating that a defeat like this has come against a team who are in the bottom half and clearly not at our level footballing wise. But with a combination of a lack of good referees and players who weren’t on their game at all, we’ve fallen short tonight. I think it’ll make our game with Derby at the weekend a lot more of a challenge now!

A wet, windy and miserable Wednesday night - one to forget. 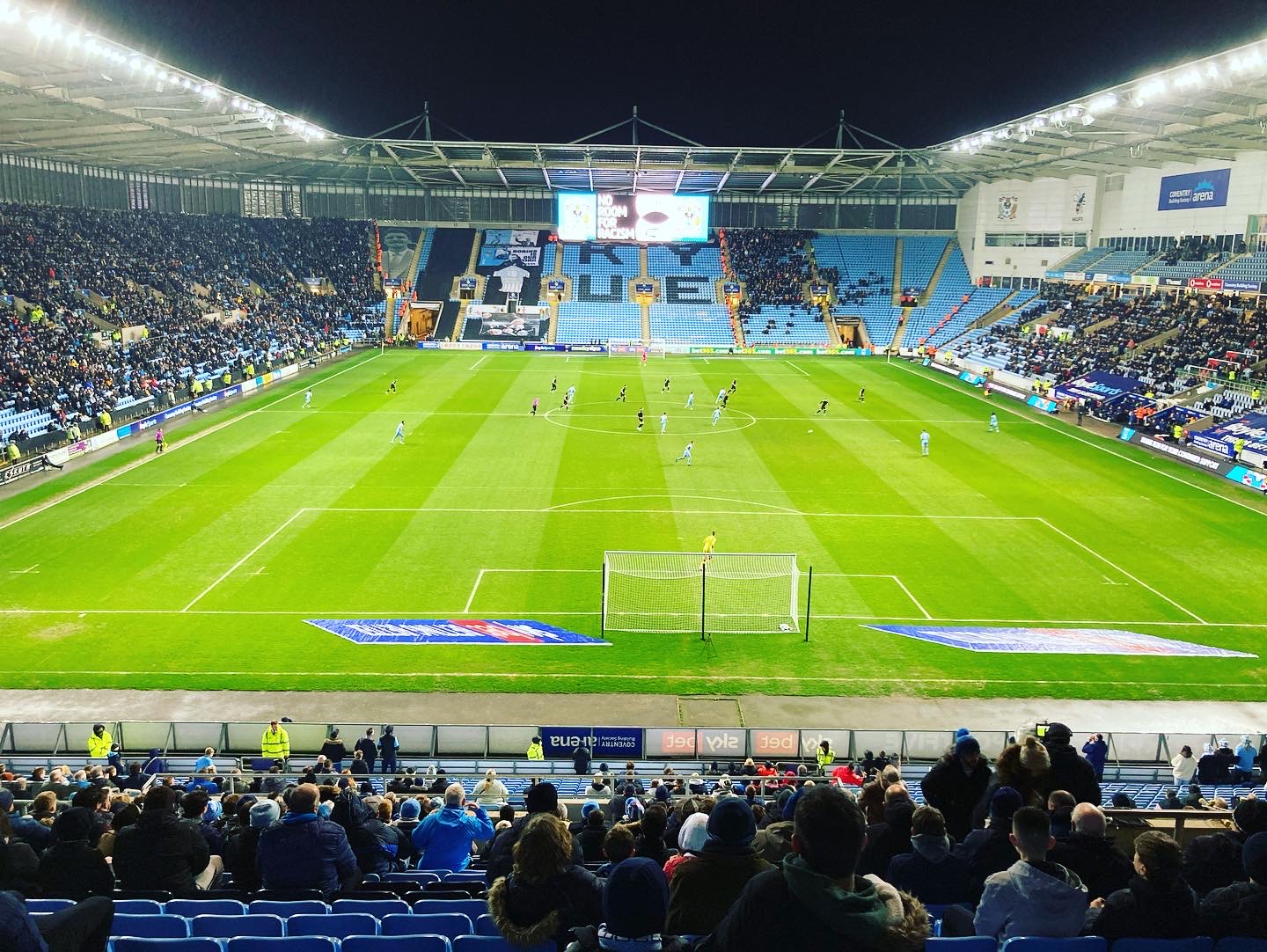 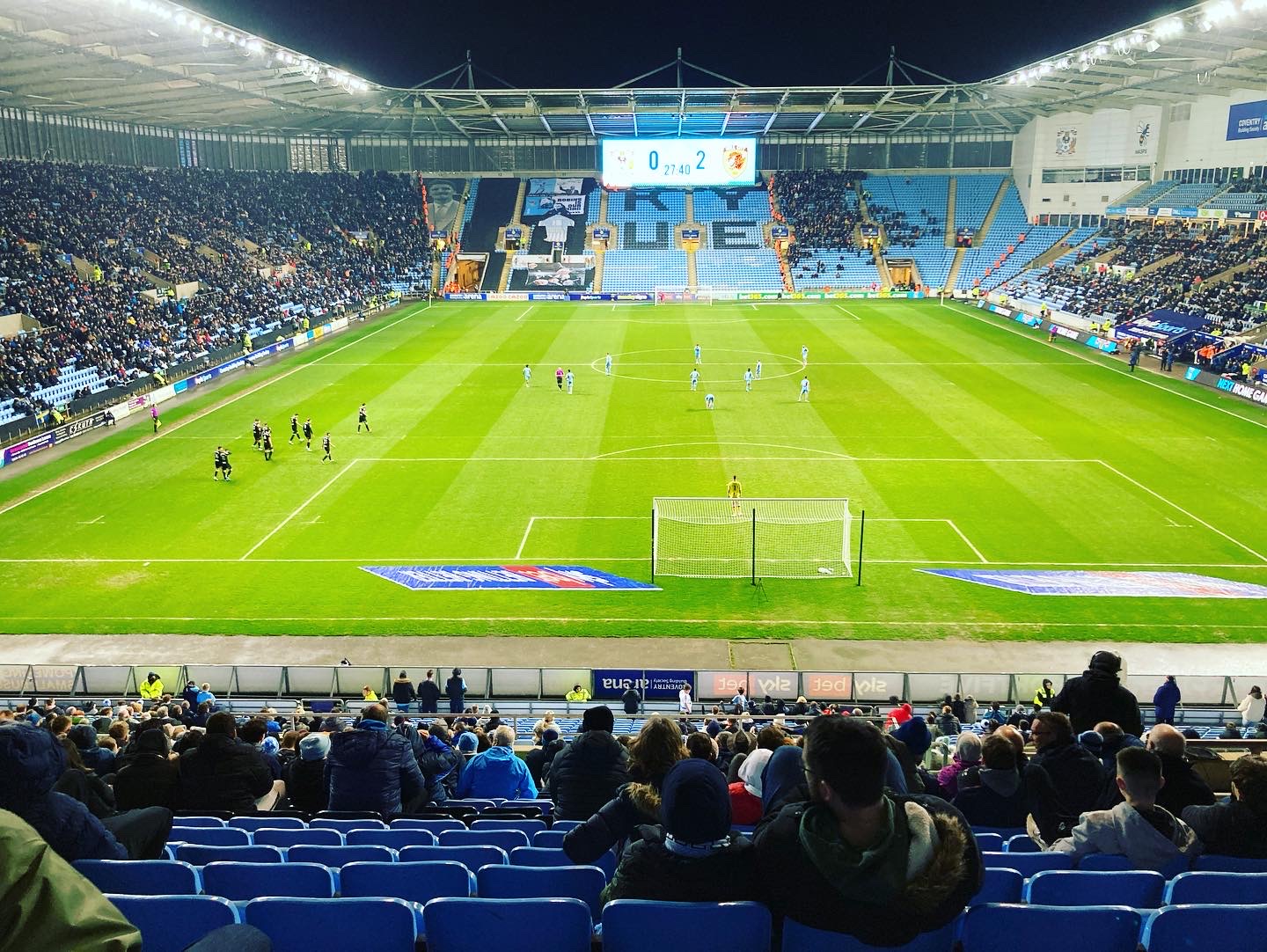 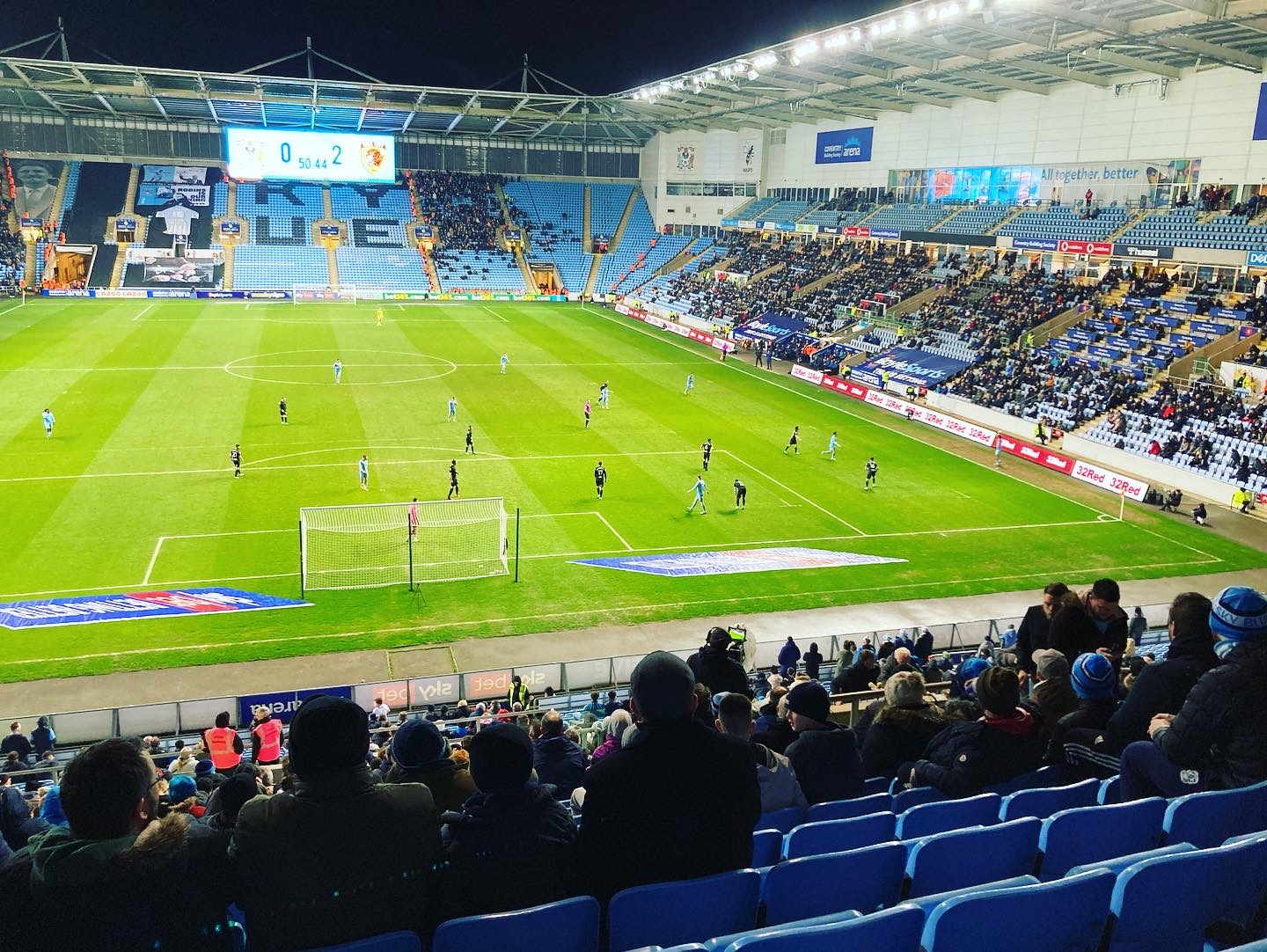 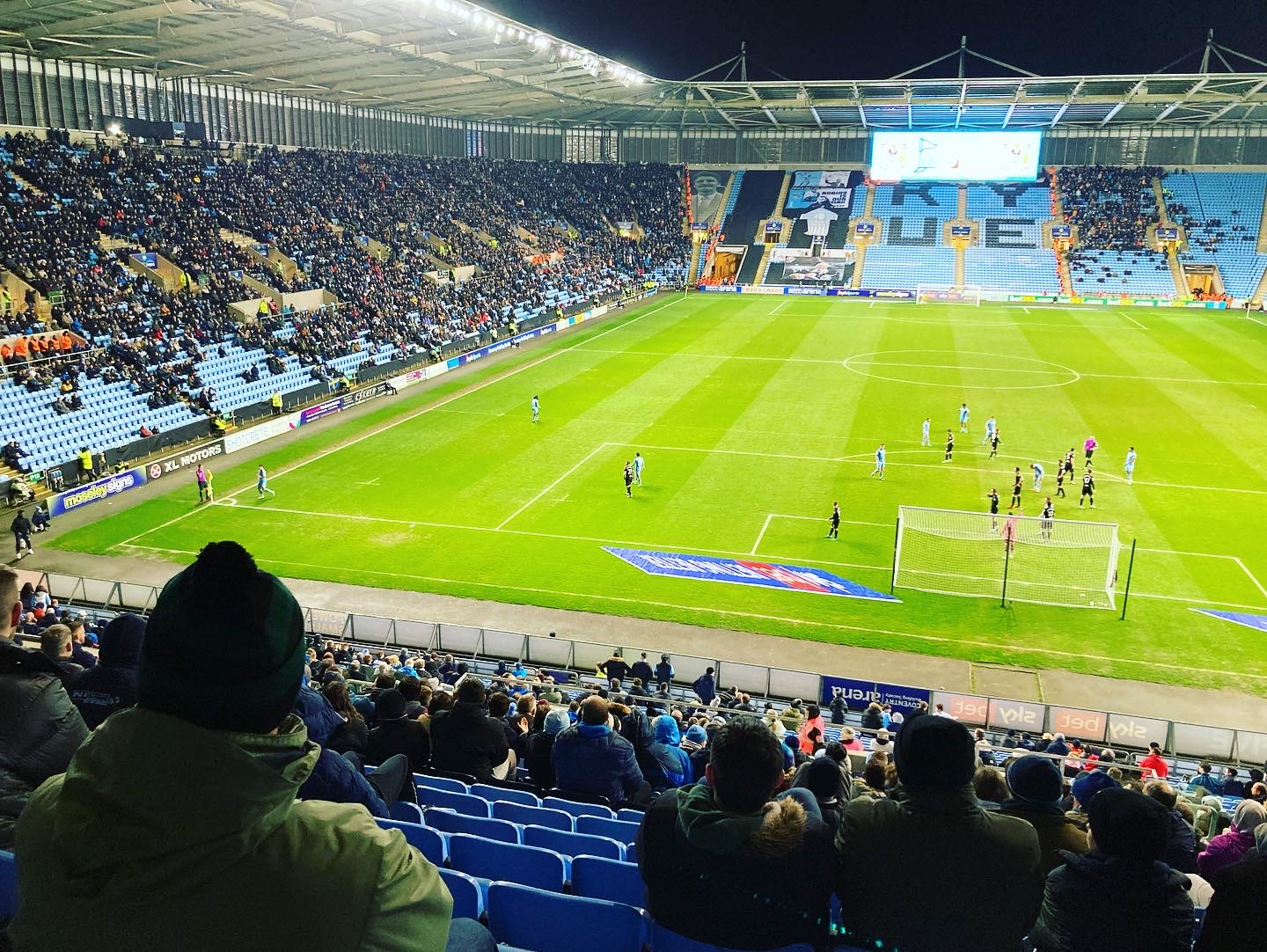