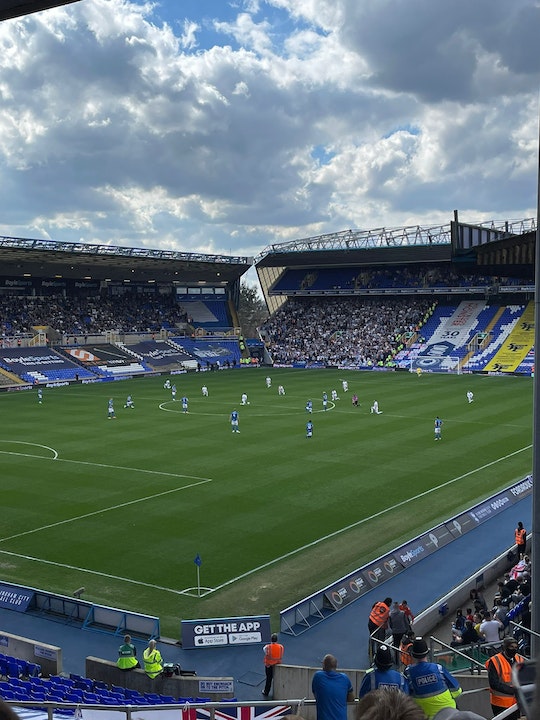 After last Sunday’s heroics away at Fulham, in our first visit to Craven Cottage since the 1980’s, Coventry City travelled to the much more familiar surroundings of St. Andrew’s today for our Good Friday fixture against Birmingham City. I won’t go into the reasons why as they’ve been well documented over the last few years, but the Sky Blues actually spent the past two seasons before this one playing our home matches here as part of a ground-sharing deal with the Blues. Our recent form in Birmingham is therefore pretty good, especially as in one of those seasons we were promoted from League 1 as champions, and prior to kick off I was of the impression that that would be a good omen for us in today’s local derby.

Of course, last weekend’s win also played its part in boosting my confidence ahead of this one. I couldn’t fault any of our players after Sunday, and I was hoping to see a performance today that would see more of the same from the Sky Blues. Mark Robins was clearly thinking along the same lines as he had named an unchanged line up to face Birmingham. Moore in goal, Rose, Hyam and Bidwell as our back 3, Dabo and Maatsen on the wings with Sheaf and Hamer in the middle. Viktor Gyokeres would start up front on his own with Callum O’Hare and Jamie Allen in behind him to make up the rest of the box midfield. I wrote in my last blog that I think that with the current players we have available this is our strongest line up, so I was happy to see that no changes had been made! It was encouraging to see the likes of Kyle McFadzean, Jodi Jones and Liam Kelly all back on the bench as well indicating that they may play a part in the final few games of our season, which would be nice to see.

I didn’t make the short trip to Birmingham today in favour of watching along from home - my brother Joe did go over, but he had decided to sit in the home end with his mate who’s a Blues fan. Many thanks to him for supplying the match day photos you’ll see at the end of the blog!

Unfortunately, the Sky Blues didn’t get off to the best of starts - Viktor Gyokeres had one opportunity early on, but we were 1-0 down inside 12 minutes after conceding from a corner. Big defender Kristian Pedersen rose to meet a good cross and head home, under little opposition from any of our defenders. Birmingham are a side who can be dangerous from set pieces and they certainly showed us that within the early stages of the game! Centre half Marc Roberts was also launching long throw ins into the box, which looked like they would cause us problems.

I actually thought that the home side looked quite good, they haven’t been in great form of late but they looked really up for this one. When we got forward, we couldn’t seem to make anything stick and it seemed like every key pass just couldn’t find a white shirt when we needed it to. Nobody was having a particularly bad game, but everything we did on the attack was much less sharp than it had been on Sunday. Dom Hyam had a shot blocked twice after the ball had dropped to him from a corner - he won another corner, and Gustavo Hamer actually hit the bar from it! It was the closest we had come to scoring by that point.

Dom Hyam then ended up absolutely covered in blood after a clash with centre forward Scott Hogan. It looked like Hogan had caught Hyam with his elbow, albeit unintentionally as both players went up for a header. Hyam was able to carry on though, with a clean shirt and a bandage round his head! Hogan almost scored immediately from the restart after Hyam was treated - a long ball evaded Jake Bidwell and Hogan was through on goal, but he couldn’t keep his shot down to trouble Simon Moore. Things would eventually go from bad to worse for the Sky Blues though - Roberts launched another long throw in into the box, which was met by an unmarked Gary Gardner. Gardner’s header sailed past Simon Moore to make it 2-0, and with not long left in the half this was a poor time to concede for us! We hadn’t really threatened Birmingham at all though, and they deserved the lead.

However, we were given a lifeline only a minute later when we won a free kick around 30 yards away from the Birmingham goal. Gustavo Hamer swung the ball in towards the back post, where Michael Rose got up to head the ball back across the face of goal - Ben Sheaf had gone charging in to meet it, and he had a tap in to make it 2-1! It was Sheaf’s first ever goal for the club, and it had given us a route back into the match against the run of play. As the clock ticked down towards half time and we entered stoppage time, the Sky Blues pushed for an equaliser and in doing so we won a corner - another opportunity for Gustavo Hamer to get the ball into the mixer. Hamer did just that, and his cross found the head of Ben Sheaf, who found the net! Just like that it was 2-2, and Sheaf now had his second goal for the club - it was like waiting for a bus, as the old saying goes!

We hadn’t looked anywhere near our best in the first half, but the way we’d fought back from 2-0 was absolutely brilliant and it’s a typical example of our fighting spirit. We really are a ‘never say die’ team this season, and I’ll never get tired of being able to say that! I wouldn’t have made any changes during the break - we’d got ourselves back in the game and it was all to play for in the second half, if I was Mark Robins I would’ve given the players the talking to they needed for their sloppiness, but then filled them with confidence that we could go on and win it rather than take anyone off. We’re a better footballing side than Birmingham, so why not? If we could bring more energy to the game and press them like we’d pressed Fulham, I made it ours to lose.

In the early stages of the second half, Jamie Allen went close with a header that just couldn’t find the target. Birmingham had an opportunity as well when full back Maxime Colin got forward, but the scoreline remained level at 2-2. We looked much better after the restart, playing the ball around more precisely and there was more hunger in our performance - just what we needed! Gustavo Hamer was running the show as he always seems to be in the middle of the park. I thought that Blues youngster Nico Gordon was having a good game for them, he seemed to be stopping every attack that came down our left hand side.

Despite our improvement the home side were still in the game, and Fankaty Dabo was being caused problems on the right at one point - Dabo actually ended up with an injury after sprinting back to stop a cross, conceding a corner. It looked to be his hamstring, I hope it doesn’t rule him out for the rest of the season! Todd Kane was introduced as his replacement for the last half an hour of the game. We survived a couple of Birmingham corners, and won one of our own around the 70th minute after Todd Kane had a cross charged down. Hamer took it, floating the ball into a lovely area and Michael Rose attacked it at pace to power a header into the top corner - 3-2! The comeback was complete!

From this point, we always seemed in control of the game. We nearly added a 4th goal moments after Rose’s header, after Gyokeres dribbled his way through to the penalty area from the left hand side - he pulled the ball back to Ian Maatsen, but his shot was well wide in the end. Birmingham threw veteran striker Troy Deeney on for the last 15 minutes, but thankfully for us he wouldn’t make much of an impact. We had massively improved in the second half and now that we had the lead, I felt confident that we wouldn’t let it slip - Kyle McFadzean was introduced for Gustavo Hamer with around 10 minutes to play, and Ian Maatsen eventually made way for Martyn Waghorn after he had moved further forward following McFadzean’s introduction.

Waghorn had a big hand in the Sky Blues’ 4th goal, which would put the seal on a brilliant second half performance! He played the ball into Gyokeres and carried on his run, Gyokeres moved it across to O’Hare who played Waghorn in on goal first time - Waggy couldn’t take the chance, Gyokeres couldn’t convert the rebound either as it was blocked on the line, but the man they call the Solihull Messi was waiting to turn the ball into the net to round off the win. O’Hare celebrated in style in front of the away end, picking up a pair of sunglasses that had made their way on to the pitch and putting them on - brilliant!

The Sky Blue song finishes with the line “We’ll fight till the game is won”, and that’s been a common factor in our success this season. This team just doesn’t give up, and even though we weren’t at our best we’ve come away from St. Andrew’s today as the victors! Whisper it very, very quietly as well, but this result leaves us only 3 points away from the Play Offs. Surely we couldn’t sneak in?

A win against Bournemouth on Monday will do very nicely! 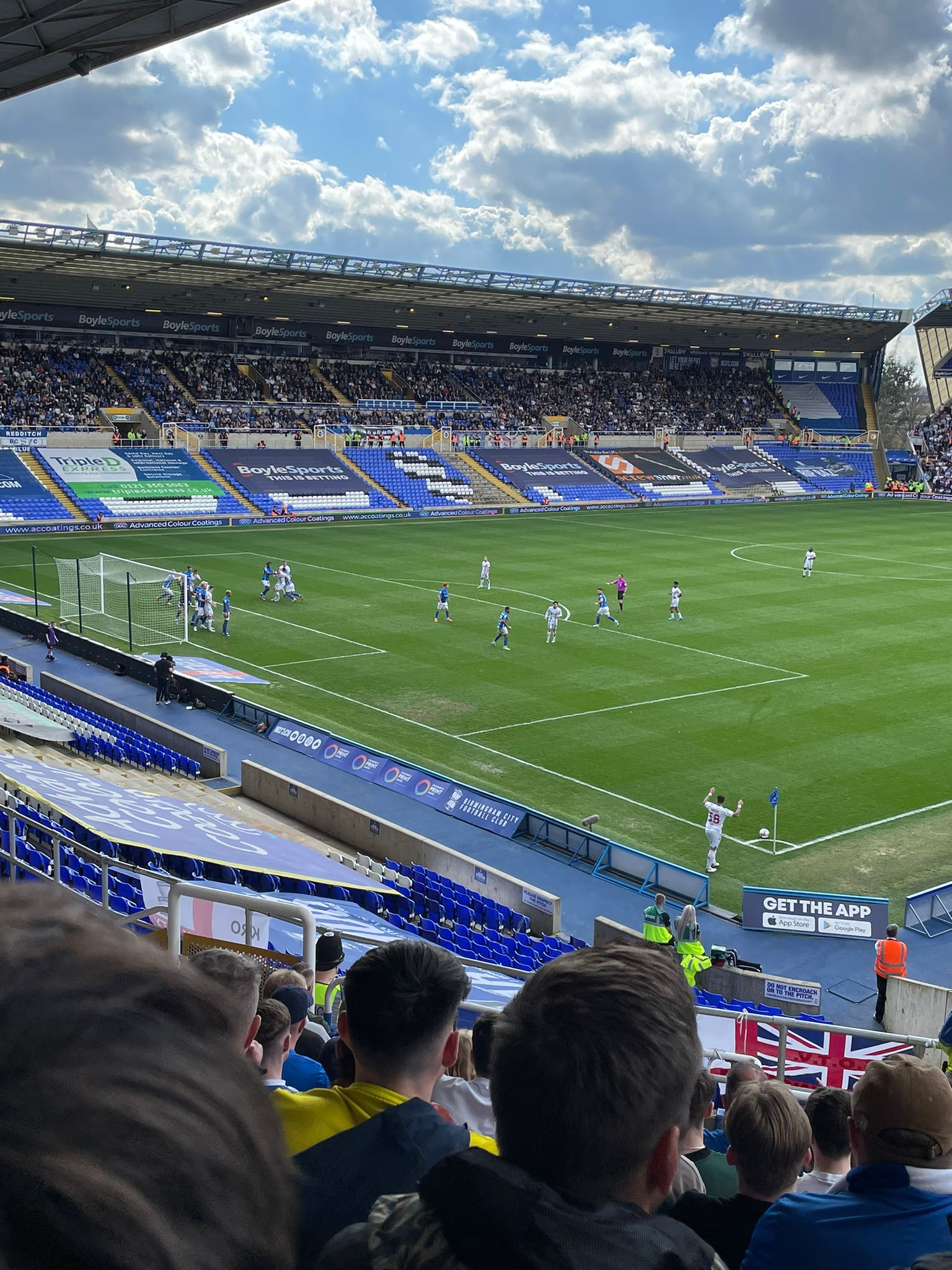 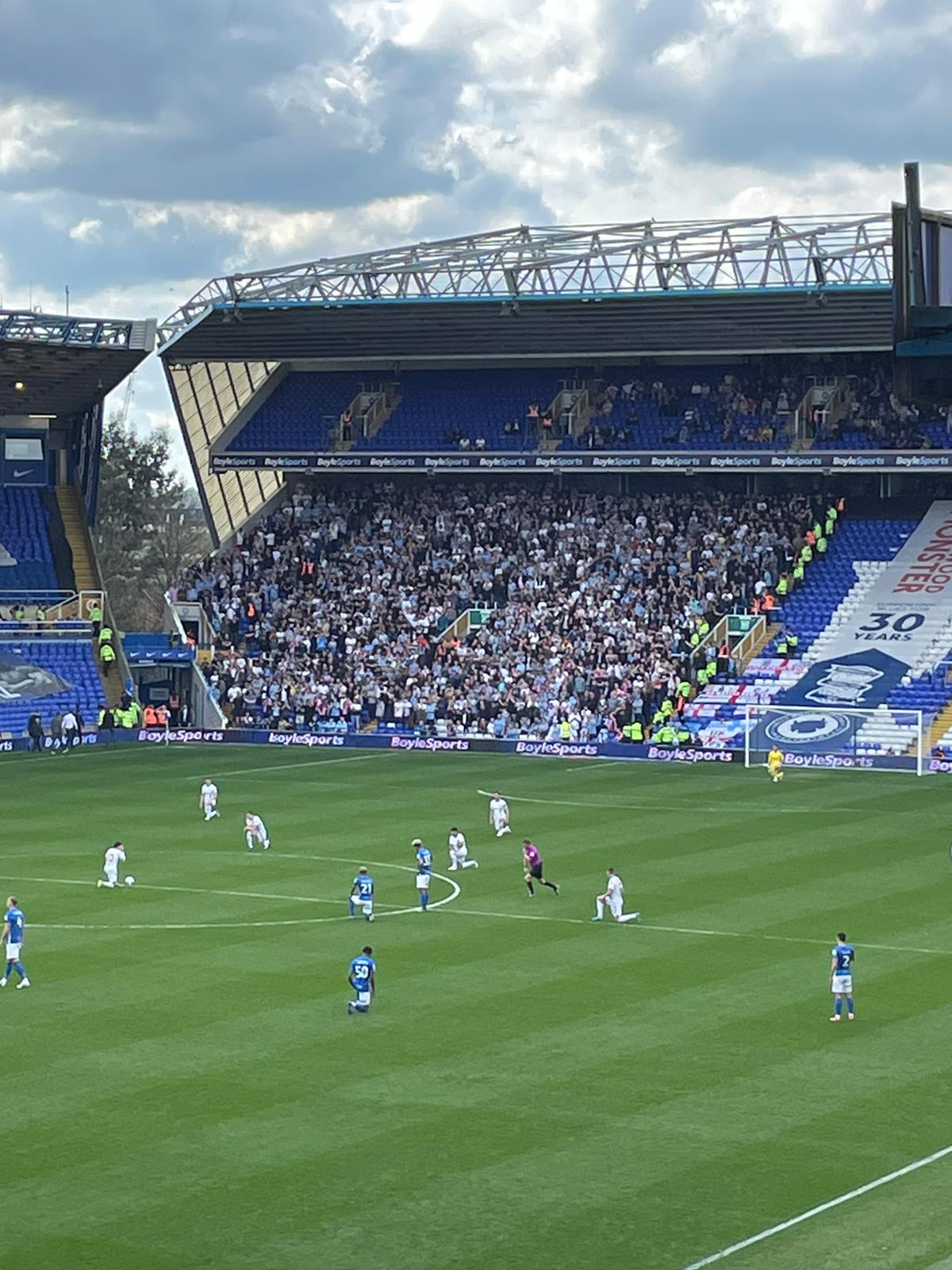 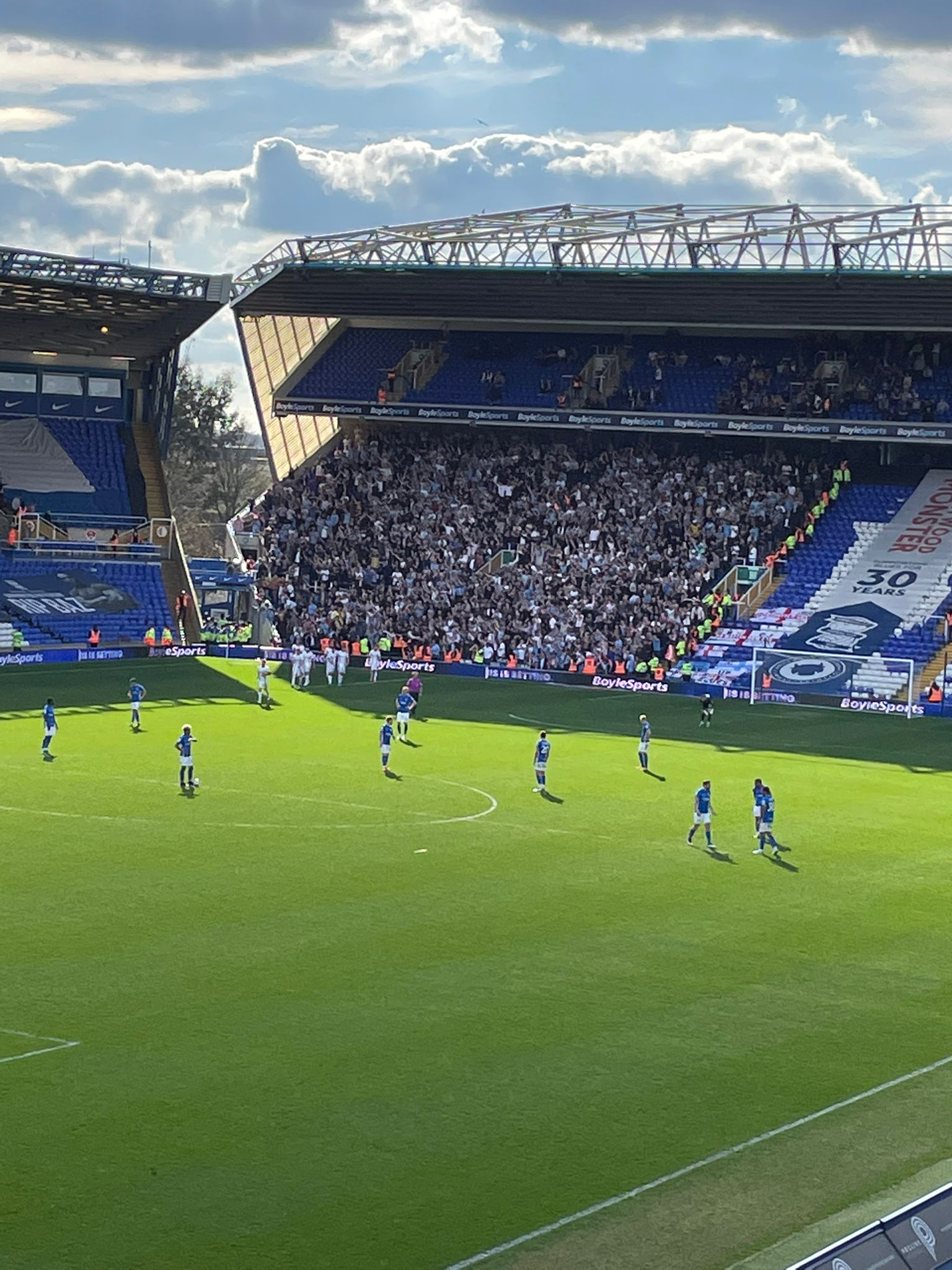