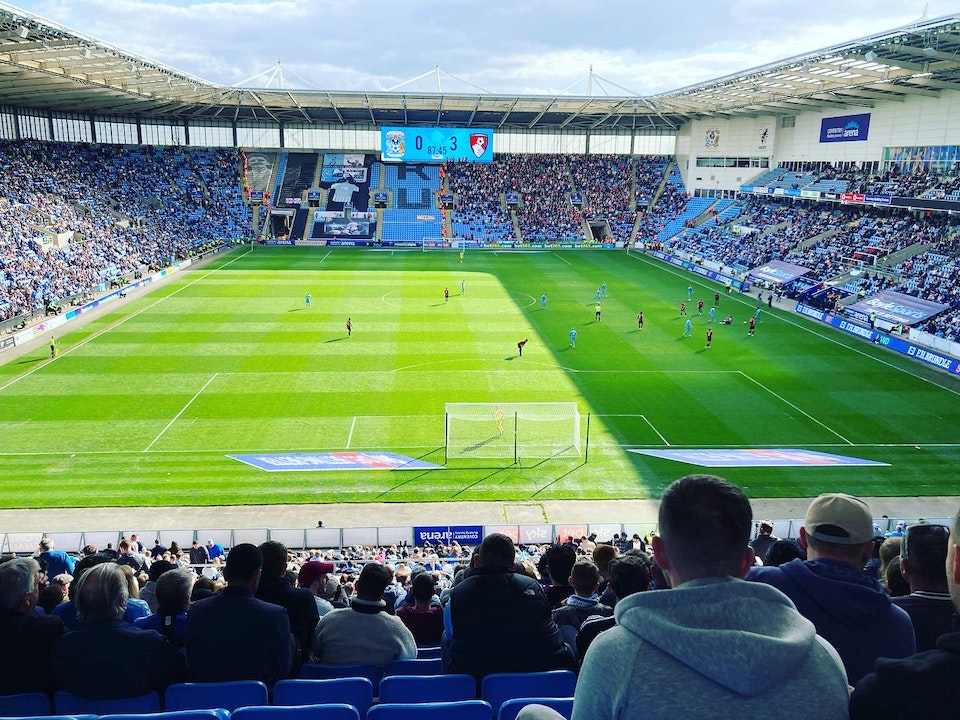 Bournemouth were today’s visitors at the CBS, for a game that would be crucial in our mini Play Off revival. After a couple of good wins on the road, Coventry City sat just 3 points outside the Play Off places before kick off today - needless to say, the possibility of sneaking into the top 6 before the end of the season is an exciting one!

I was keen not to get ahead of myself before the game today though despite the buzz surrounding the team at the moment. Yes, it’s still possible that we can make the Play Offs, but we would need to win all of our remaining games and we also need the teams above us to drop points for it to realistically happen - the ball isn’t really in our court, which has made me default to more of a sceptical position than an optimistic one. Another important thing that I think a lot of City fans have forgotten in the days leading up to this game, is that we’ve still got difficult teams to play and just because we’ve beaten Fulham it doesn’t mean we’ll beat anyone else up there. Bournemouth, for example, looked a cut above when we played them earlier this season and we were given a huge slice of luck to get back into that game, and we just about salvaged a draw. I’ve seen people saying that they’re confident we’d win - I wasn’t so sure, but that didn’t stop the absolute mania on social media this week. I saw one person say on Twitter that this was our biggest game since the FA Cup final in 1987, which made me laugh! It’s just not, is it?

With today being Easter Monday and with the prospect of beating Bournemouth and getting into the Play Offs on the cards, a bumper crowd was expected at the CBS today. I went up to the game with my mate Callum, and whilst we were both excited about the possibility of a Sky Blues victory, we both felt that Bournemouth shouldn’t be underestimated. They are second in the league and about to be promoted after all! Mark Robins had only made one change to the side that has started our last two games at Fulham and Birmingham, and that was only because Fankaty Dabo picked up an injury last time out - Todd Kane was his replacement. Scott Parker had picked a team full of quality for the visitors - Nat Phillips at centre half will get his head on anything, Lewis Cook in midfield is a quality player, and their front 4 looked formidable. Jaidon Anthony was one of the best players on the pitch when we’d played Bournemouth away, Jamal Lowe is a good talent, Ryan Christie is also a very good player and Dominic Solanke up front would definitely be looking to cause us problems.

I thought that we actually started the game really well though. Viktor Gyokeres had an early chance after a move down the right hand side, the angle was against him as he got a shot off but he won a corner as his effort needed to be tipped wide by keeper Mark Travers. We were on the front foot, and had more of the possession in the first 10 minutes which I thought would serve us well going forwards, and it was clear that we were trying to get the opener - Ian Maatsen had a chance after Gyokeres had knocked the ball down to him, but his shot only found a row in the away end behind the goal.

One thing that I thought Bournemouth were doing really well was putting our back 3 under pressure when they had the ball. We had next to no time to pick a pass, with angles being closed down - at one point Dom Hyam hesitated slightly too long before trying to clear the ball, and he conceded a throw in under pressure from Jamal Lowe. From the throw in, Bournemouth worked the ball down their left hand side neatly and crossed to the far post, where Lowe found himself unmarked - his header found the net via the underside of the bar, and the Cherries had scored with their first chance of the game. Callum had said to me a couple of minutes before that teams like this only need one chance to punish us, and he was spot on with this assessment unfortunately! The fact that Lowe was unmarked was very frustrating, we shouldn’t be letting that happen.

We continued to push though, now a goal down. Todd Kane had a chance on the volley, but couldn’t find the target. The ball just wouldn’t seem to sit for us, every cross we put in that was knocked down just wouldn’t fall to the right man, or Bournemouth were out too quickly to close down any attempted shot we might have. Any time we got in and around the penalty area, the final pass that was needed just wasn’t coming off for us. Callum O’Hare had what was undoubtedly the best chance of the half - the ball was slipped through to him as he made a clever run into the box, and with time to pick his spot O’Hare could only shoot straight at Travers. He won a corner, but really he should’ve scored! It’s the sort of chance that a Bournemouth forward wouldn’t miss.

Viktor Gyokeres had a header on target from a Jake Bidwell cross, but we still couldn’t find a way through. Right on half time, Dominic Solanke was allowed to pick up a loose ball and as our defenders backed off him, he got a shot away that took a wicked deflection to take it over Simon Moore and into the net. It was 2-0, against the run of play it must be said but we had been the architects of our own downfall with this goal - the loose ball that found its way to Solanke should’ve been attacked, but it looked like neither Hyam or Rose wanted to commit. They both then back off Solanke and allowed him to take the ball into an area he could shoot from. The deflection was unlucky, but if you allow teams in like that then you need to expect to be punished!

At half time it felt like we would need a miracle to get anything out of the game. It wasn’t over of course, and if we could get an early goal once play resumed then who knows, but we’d made things much harder for ourselves by conceding two quite preventable goals. I’m used to seeing us not take our chances at the other end, but it’s still frustrating to see especially when we then concede so cheaply. I wouldn’t have made any changes though as I did think we had played well, we’d certainly been the better side so far and the scoreline flattered the visitors - we needed to come out and take the game to Bournemouth though if we were going to get anything today.

Unfortunately, the second half started quite slowly and within the first 10 minutes of the restart we had conceded again. A long ball wasn’t properly dealt with and the ball dropped to Ryan Christie, who was given all the time in the world to slide Solanke in - Solanke duly finished into the far corner to make it 3-0, and again we’d backed off and invited the attack on to us. Players get told not to dive in which is understandable, but you also need to pick and choose when to back off and when to go and try and challenge someone on the ball, and our defenders had chosen the wrong option here and that’s what cost us.

The goal really killed the game off, and from that point onwards we didn’t look remotely interested. Bournemouth didn’t need to get out of first gear, and so were happy to let us keep the ball and play it across the back etc. to no avail. Mark Robins introduced Kyle McFadzean and Martyn Waghorn just after the hour mark - not changes you make if you’re making a go of it. It seemed we had just accepted our fate and it made for grim viewing really, there was very little get excited about for the remainder of the game. Waghorn had a shot on target towards the end, Liam Kelly was subbed on for the last 15 minutes which was nice to see as he’s missed quite a lot of football due to injury this season, but I can’t recall anything else worthy of note.

It was a poor end to the game and it’s a shame, as it’s a major blow to our Play Off hopes. I’m glad that I didn’t allow myself to get too carried away, but it’s disappointing when you think of what might’ve been! We’ve still massively over-achieved this season though just by being in the discussion at this stage of the season I suppose. Regardless though, I’ll be at West Brom away at the weekend where hopefully we’ll put in a better performance, and results elsewhere may still end up going our way!

It’s the hope that kills you, isn’t it? 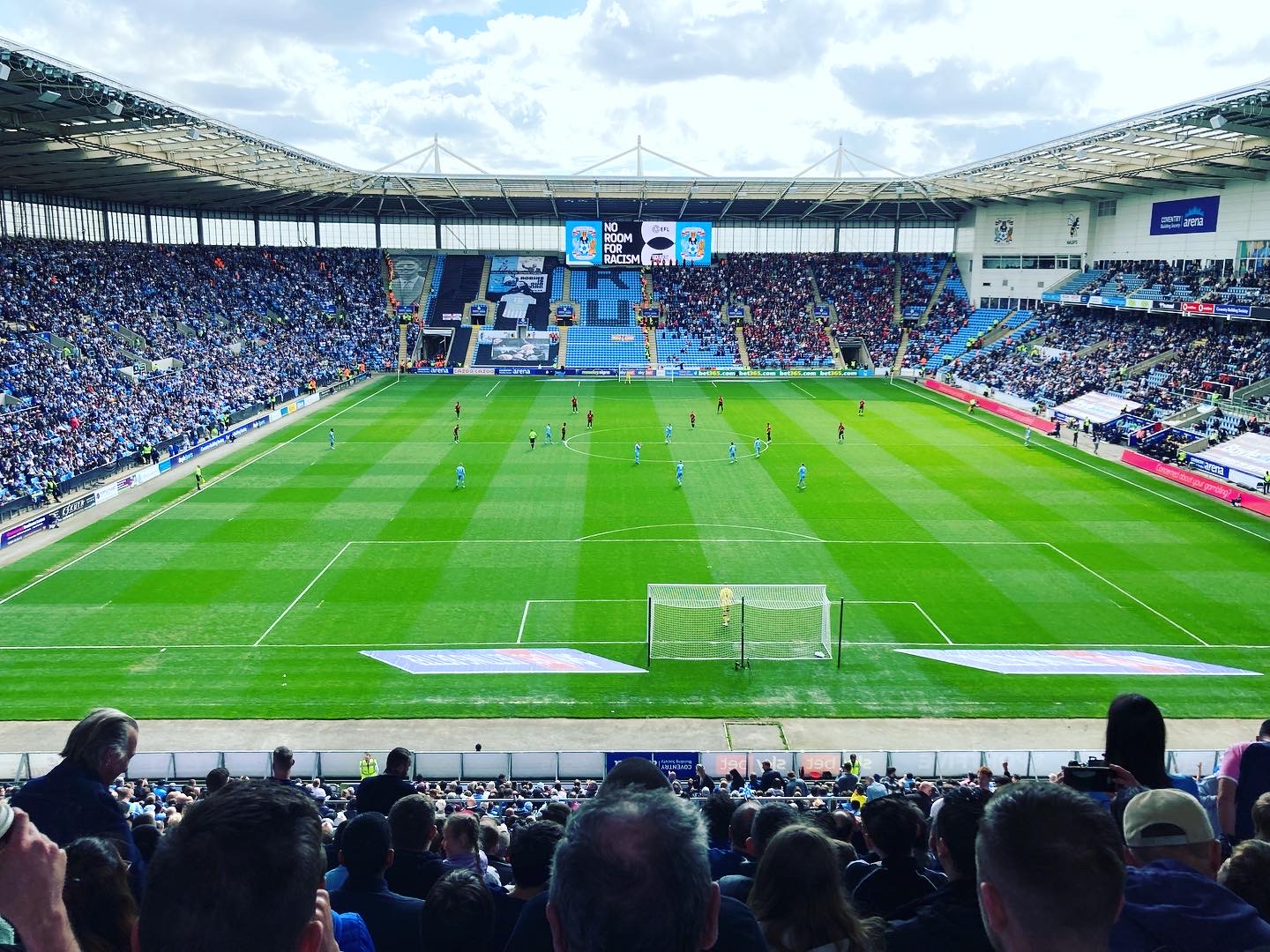 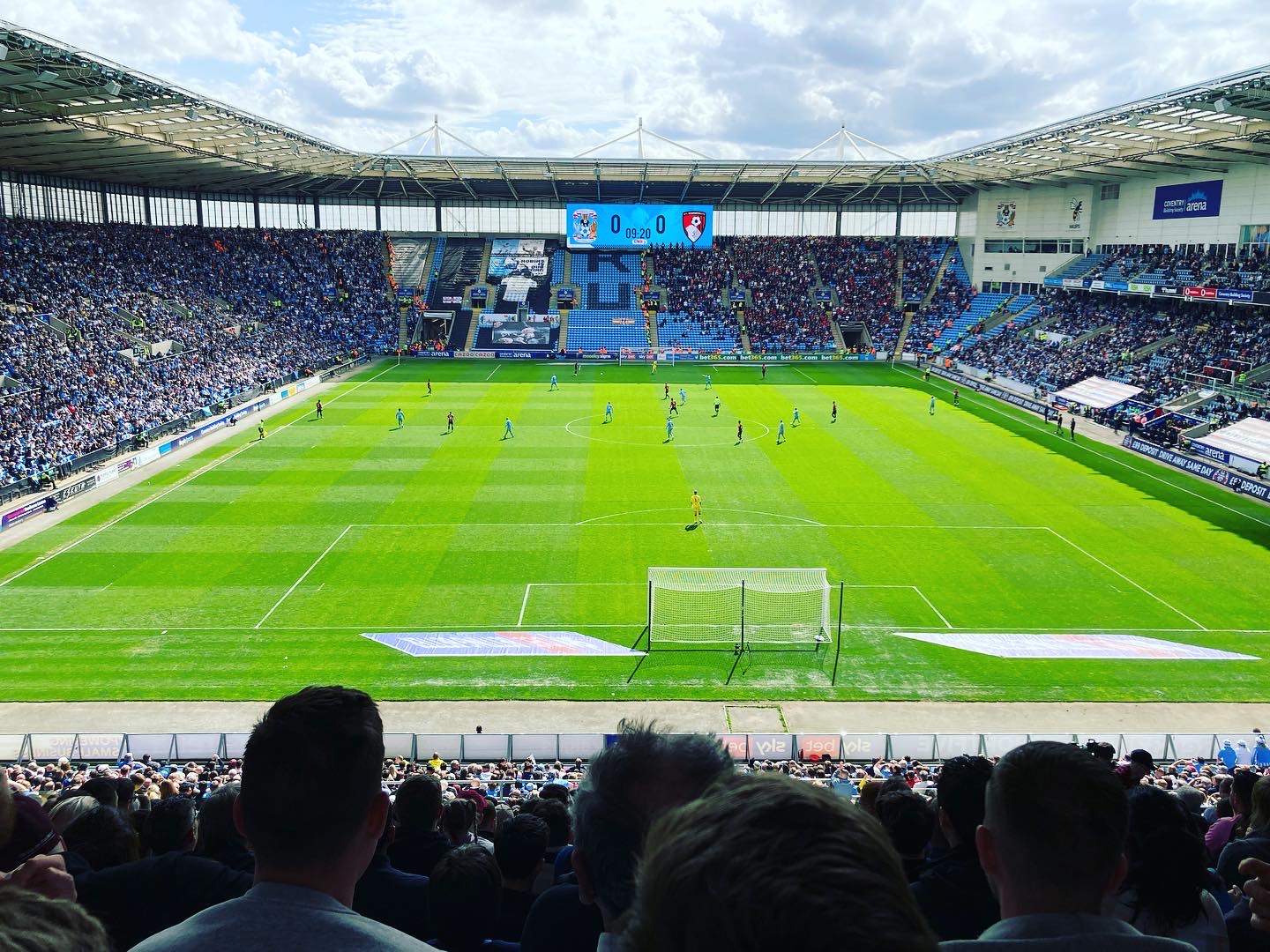 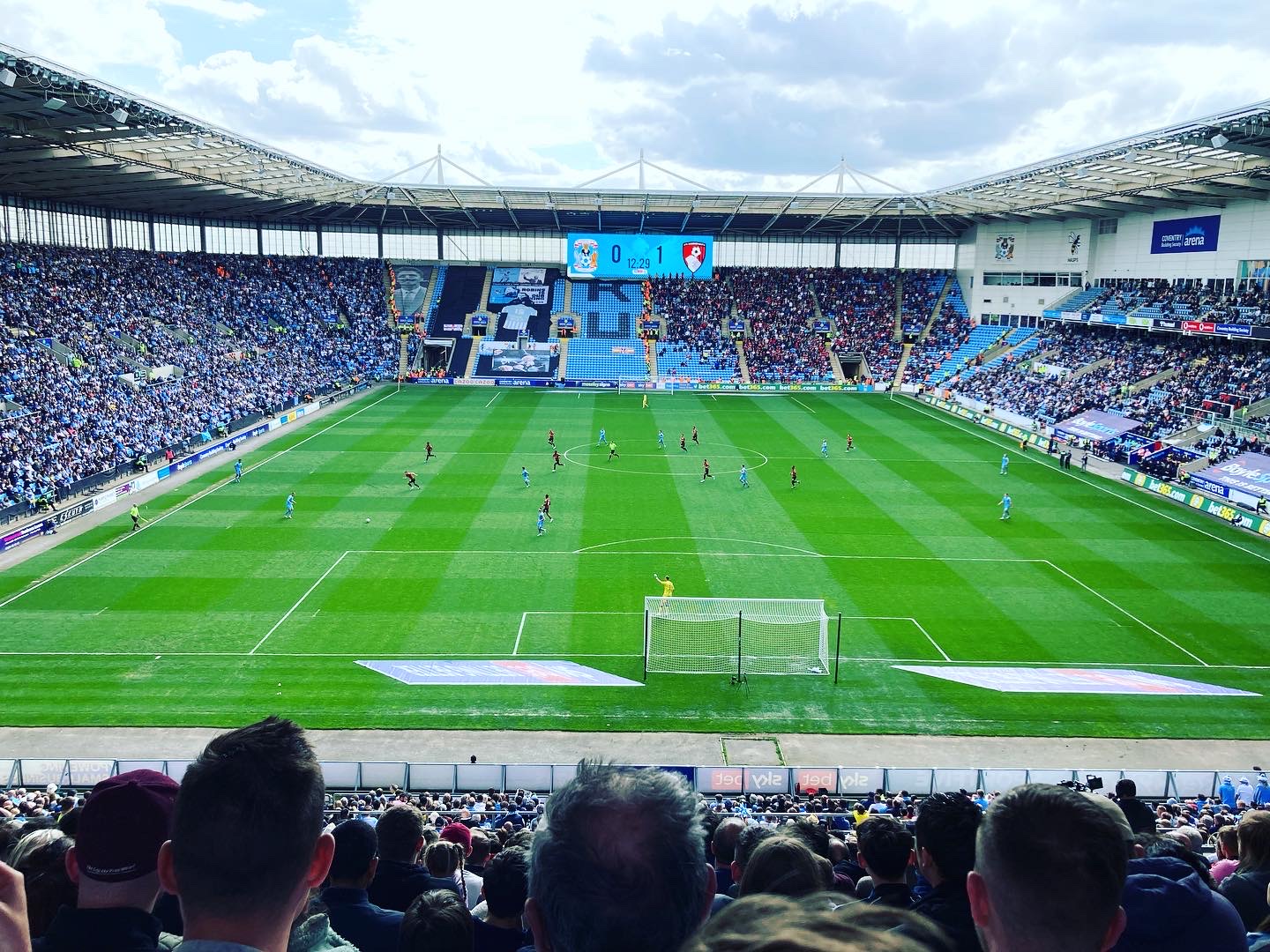 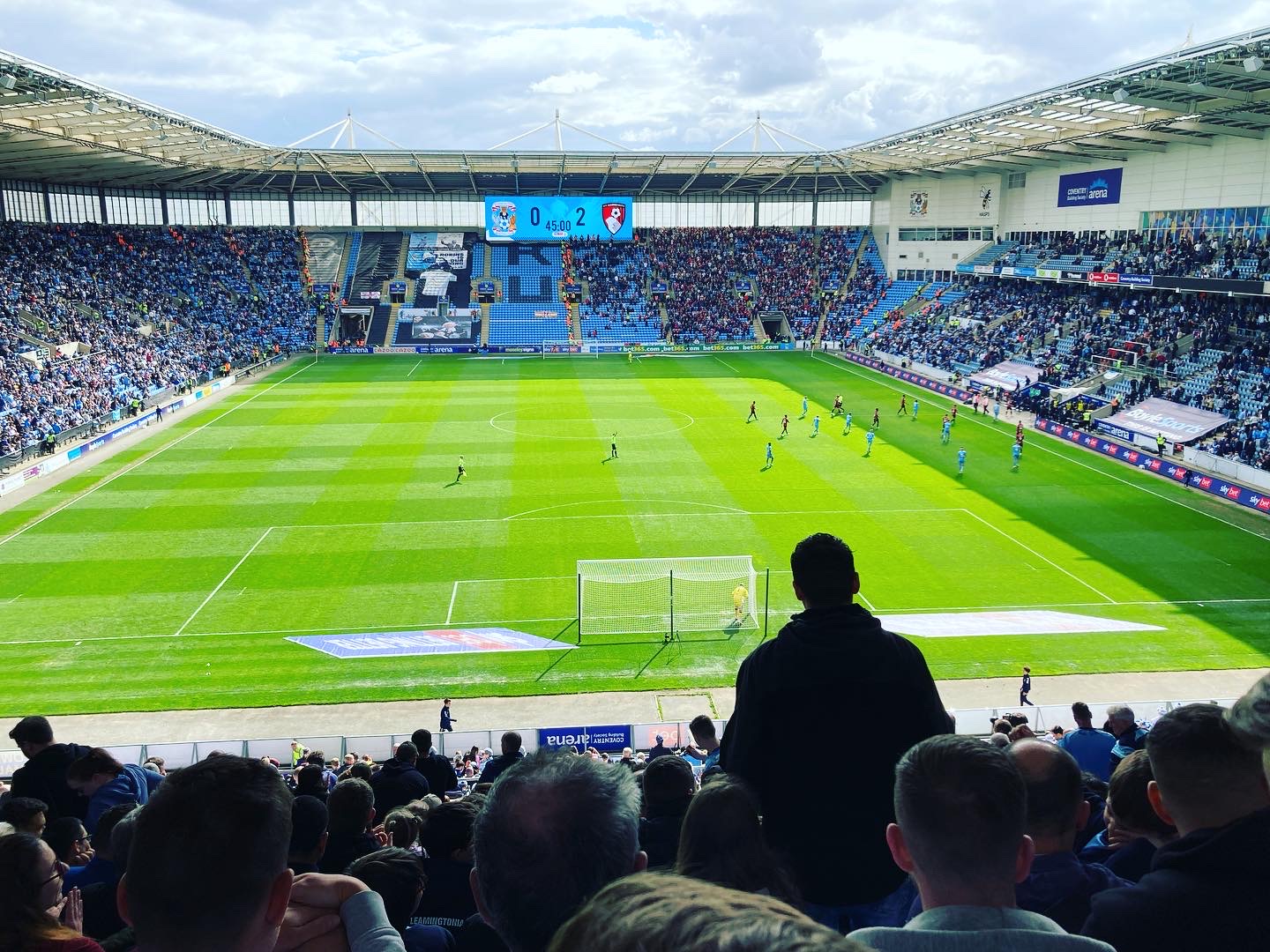 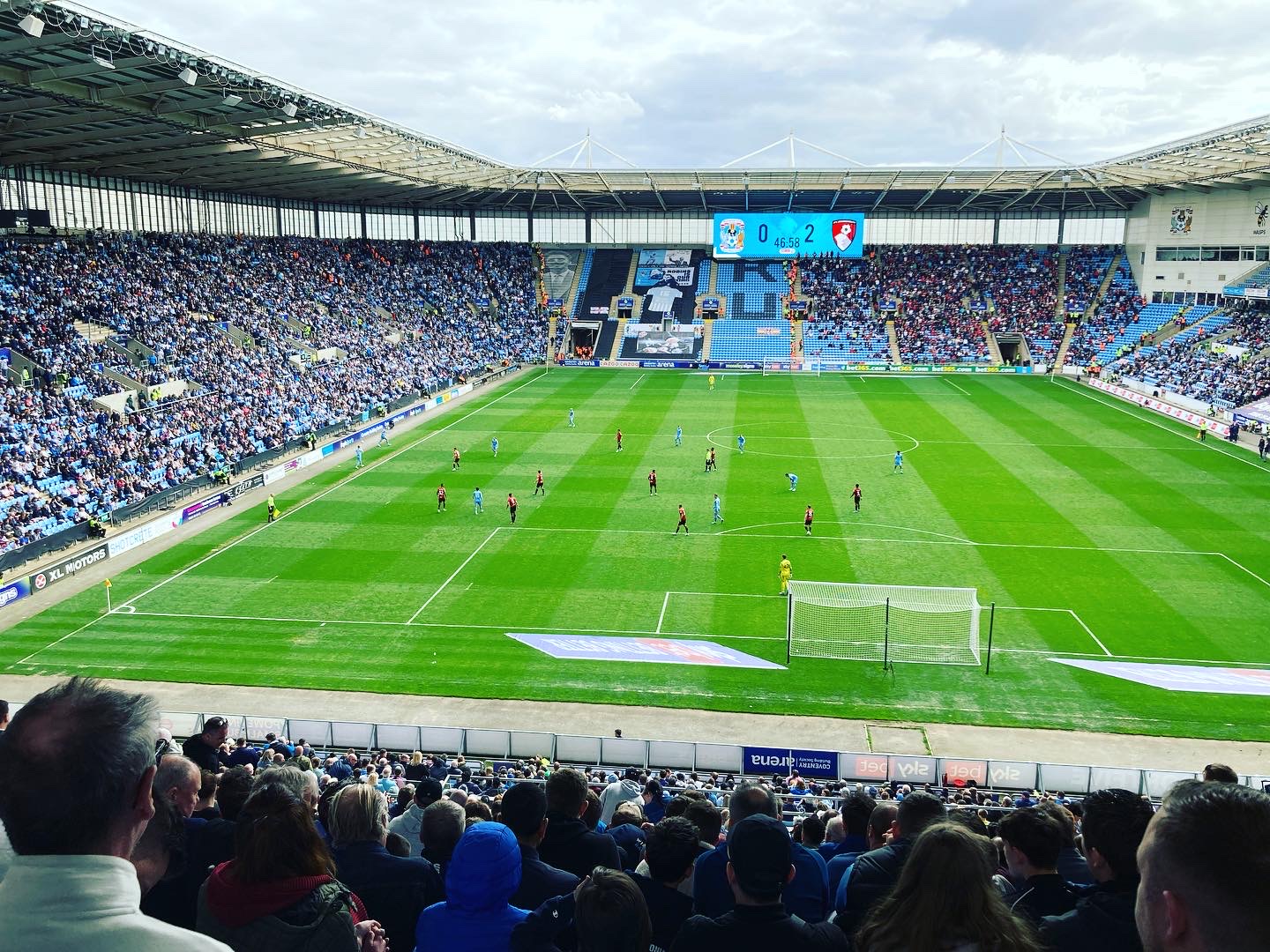