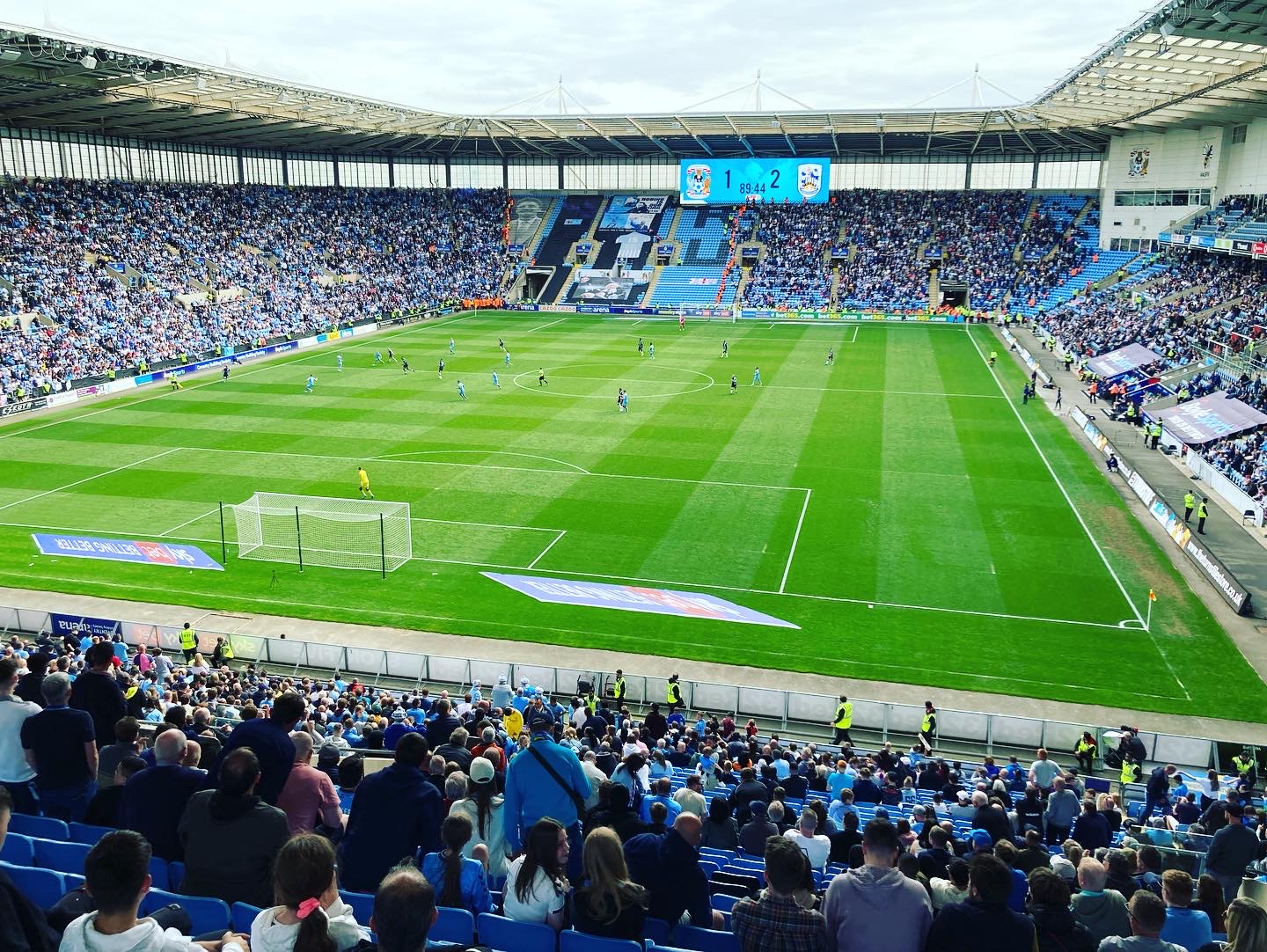 It was Coventry City’s final home game of the season today, against promotion chasing Huddersfield Town. Automatic promotion may be a little bit beyond them with so few games left to play, but a win today would cement their place in the Play Offs - myself and my mate Callum were both pretty certain that we’d be in for a difficult game today on this basis. When we had played Huddersfield away in December, they had looked far from being a top 6 side in my opinion but their form has picked up in the new year, so fair play to them!

Mark Robins had stuck with Ben Wilson in goal after his solid performance at The Hawthorns last week, and he’d also switched to playing two up front. Ben Sheaf dropped out of the team due to injury and Martyn Waghorn would partner Viktor Gyokeres up front. Jake Bidwell was given the nod ahead of Ian Maatsen at left wing back as well. It was a reasonably solid team, we don’t have anything to play for anymore but going with two strikers indicated that we would at least give it a go and take the game to Huddersfield.

The game started at quite a fast pace, and the first 10 minutes were end to end. We had a great chance after some neat build up play - the ball was worked into the box from the right and it fell to Martyn Waghorn, but he couldn’t sort his feet out in time to strike the ball cleanly and his shot was pushed behind for a corner by keeper Lee Nicholls. We had a few corners in the early stages, Dom Hyam attempting an overhead kick from one of them, but we couldn’t find a way through to go ahead. I did think we looked pretty sharp though, definitely not ‘on the beach’ as mid-table teams can tend to be at this stage of the season. Kyle McFadzean almost scored an own goal with an awkward, looping header, but Ben Wilson was able to scramble back to prevent it from crossing the line.

The game settled down after the frantic opening 15 minutes, but I thought we were the better side for the most part. Our deliveries into the box were poor though, every cross was over hit and we didn’t threaten Nicholls very much at all. Callum O’Hare had a glorious chance after being slipped through by Viktor Gyokeres, but one on one with the keeper O’Hare dragged his shot wide of the far post. Huddersfield immediately went up the other end and forced Wilson into a save down to his right. It felt like things wouldn’t sit for either side in front of goal, Dom Hyam had a good chance for us a couple of yards out but didn’t make proper contact with the ball after a set piece had been headed back across the 6 yard box by Waghorn.

As half time approached, I said to Callum that it would be a shame if we conceded a goal now as we wouldn’t have deserved to go behind on the face of it. Within a matter of seconds, Huddersfield’s Harry Toffolo decided to cut inside on to his right foot as he ran towards our goal, and he curled a beautiful effort into the top corner and well beyond Wilson’s reach. It was a brilliant goal, you just don’t save those! Apologies to all Sky Blues for jinxing us though, I should’ve kept my mouth shut shouldn’t I? We didn’t deserve to be behind but again, we’d had good chances and not taken them - it’s been the story of our season! We were still in the game though and if we could sort our finishing out in the second half, I was hopeful that we’d get something from the game in the end.

The second half started with nowhere near as much intensity as the first, but we were seeing more of the ball than the visitors once again. Gustavo Hamer had a shot from distance but this didn’t really trouble the keeper, and Huddersfield almost doubled their lead when a low ball was fizzed across the face of our goal - it only needed a touch and they would’ve scored, but thankfully the on coming centre forward couldn’t make proper contact with the ball.

We had fewer clear cut chances than we’d had in the first half, but we were pushing for an equaliser - Callum O’Hare went down in the box at one point but I didn’t think it was a penalty, he appealed but it looked like he had fallen over expecting contact from the keeper, which never fully came. O’Hare had a shot on target as well after some more good build play from the Sky Blues, Waghorn had laid the ball back to him and O’Hare forced Nicholls into a save, but couldn’t beat him. Gustavo Hamer had a go from distance again, it was a good effort which again needed saving but we were still unable to find a way through. Mark Robins introduced Fabio Tavares for the last 20 minutes in place of Martyn Waghorn, and Josh Eccles came on for Todd Kane on the right. I was hopeful that Tavares could make an impact!

Ben Wilson made an important one on one save with around 15 minutes left to play - it was a great stop, after what had been a good attacking move by the visitors. Jodi Jones was introduced for the Sky Blues shortly afterwards, which was nice to see - could it be the final time he plays for us? It would be a shame if so in my opinion, I do think he adds something when he’s on the pitch but his injuries have been a problem throughout his time with us. In the 78th minute, Huddersfield got through again and Ben Wilson was required to make a save - he did so, and rushed out to chase the ball down as it dropped to a Huddersfield player inside the area. In doing so, he couldn’t stop himself from bringing the attacker down after they had knocked the ball past him - the referee pointed to the spot, and we couldn’t have any complaints with the decision! Sadly Wilson couldn’t repeat his penalty saving heroics of last week despite diving the right way - the penalty by Faustino Anjorin was a good one in fairness, right in the bottom corner.

I thought this would probably mean game over for us, but in true Sky Blues fashion this season we had a late goal in us. The build up play was excellent, with some one touch passing on the right hand side and the ball was squared into Gyokeres who had a tap in to make it 2-1. There was only a couple of minutes left to play, but there was hope that we might find a late equaliser - Fabio Tavares had the best chance, a shot from outside the box that he tried to bend into the far corner, but it was off target in the end. Sadly we couldn’t produce a final dramatic moment of the season, but in all fairness we’ve had more than our fair share of that already!

Best of luck to Huddersfield in the Play Offs. We have Stoke away on the final day next weekend, and then it’s no Sky Blues football until July! It’s been a great season for us on the whole, whilst we’ve slipped down to mid table it’s still an overachievement for us considering how last season went. We’ve given ourselves a really good platform to build on for next season, and I’ve really enjoyed the football we’ve played throughout the entire season!

I’m already looking forward to next season, and the ups and downs it might bring! 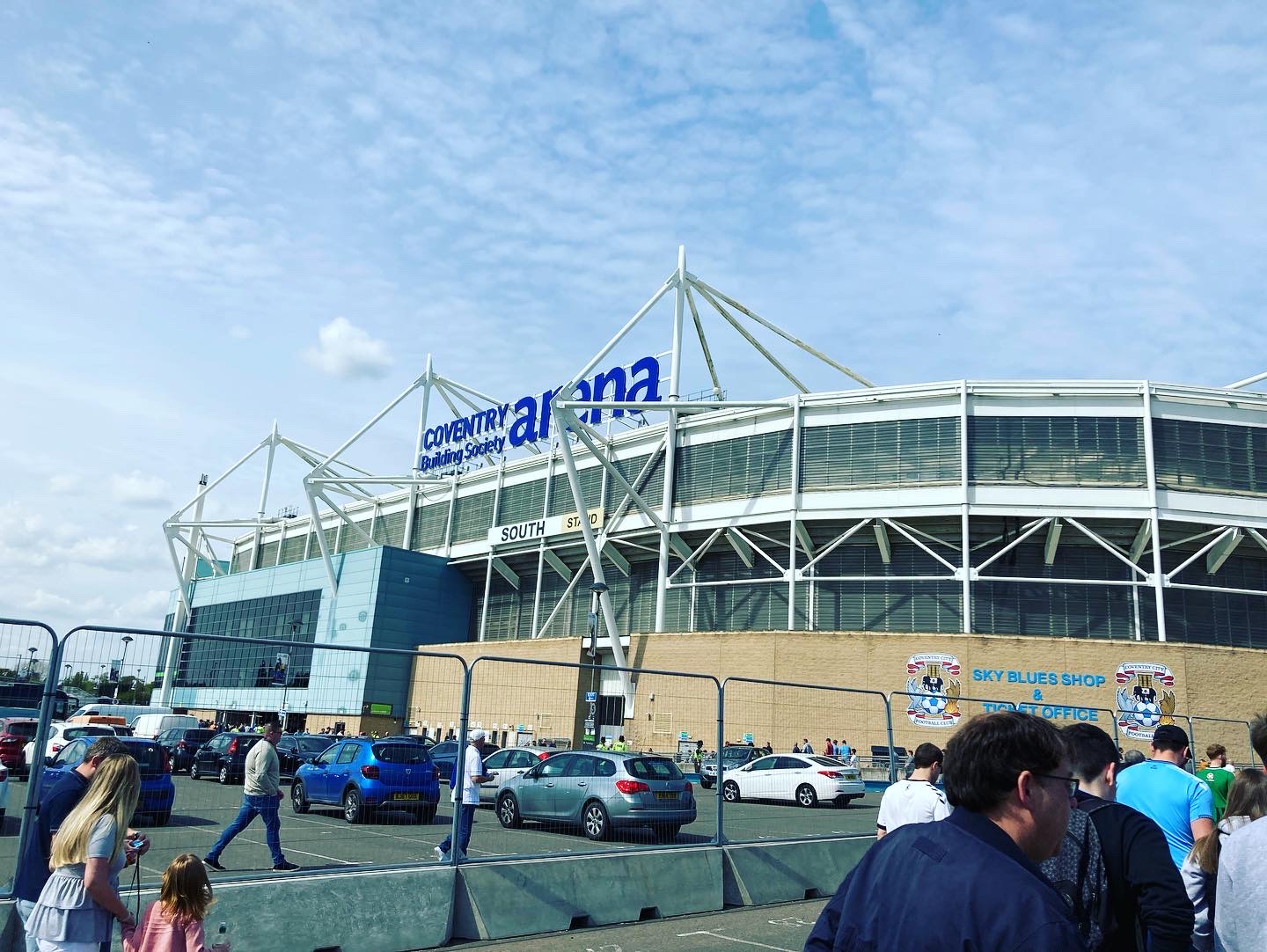 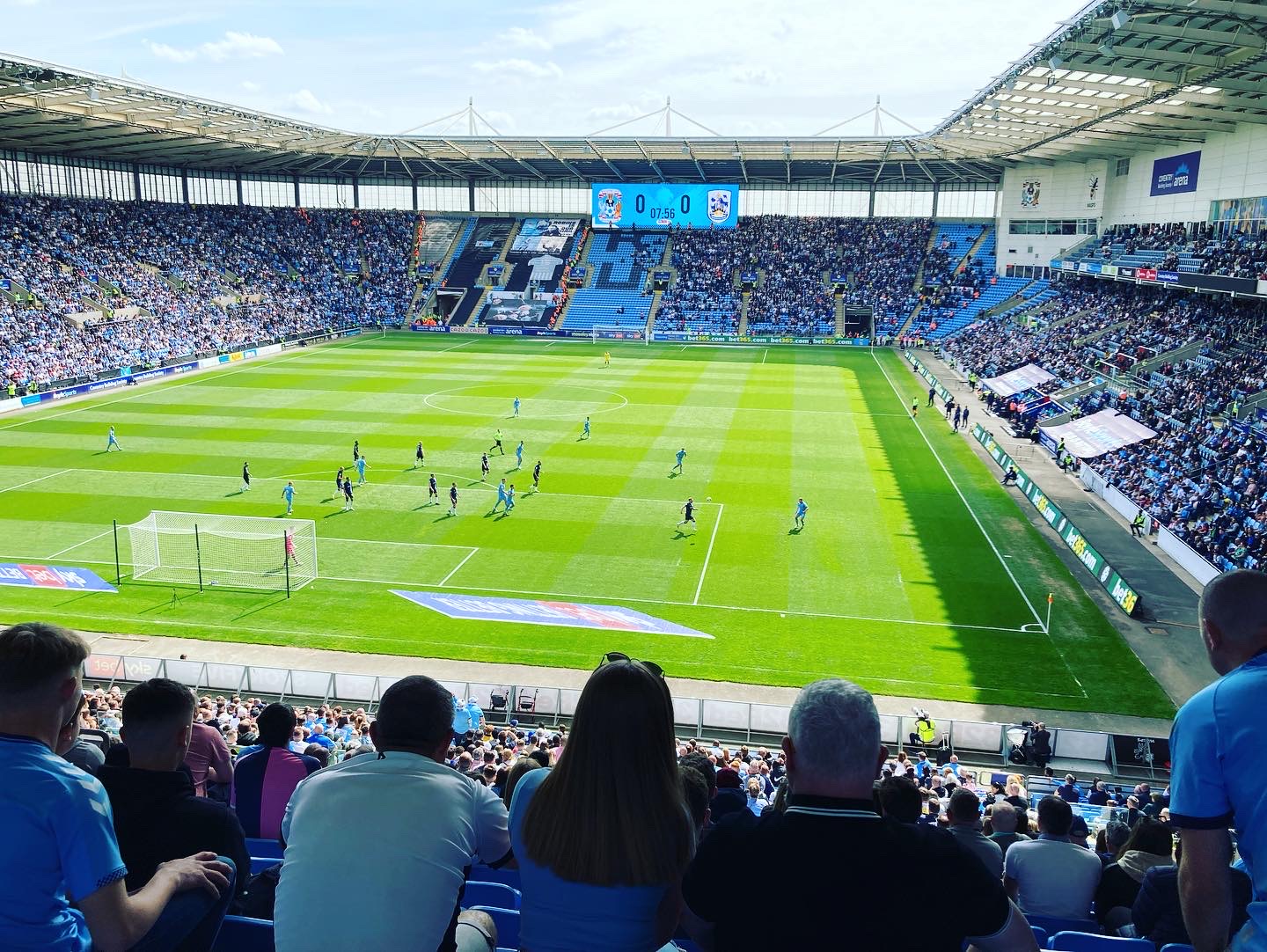 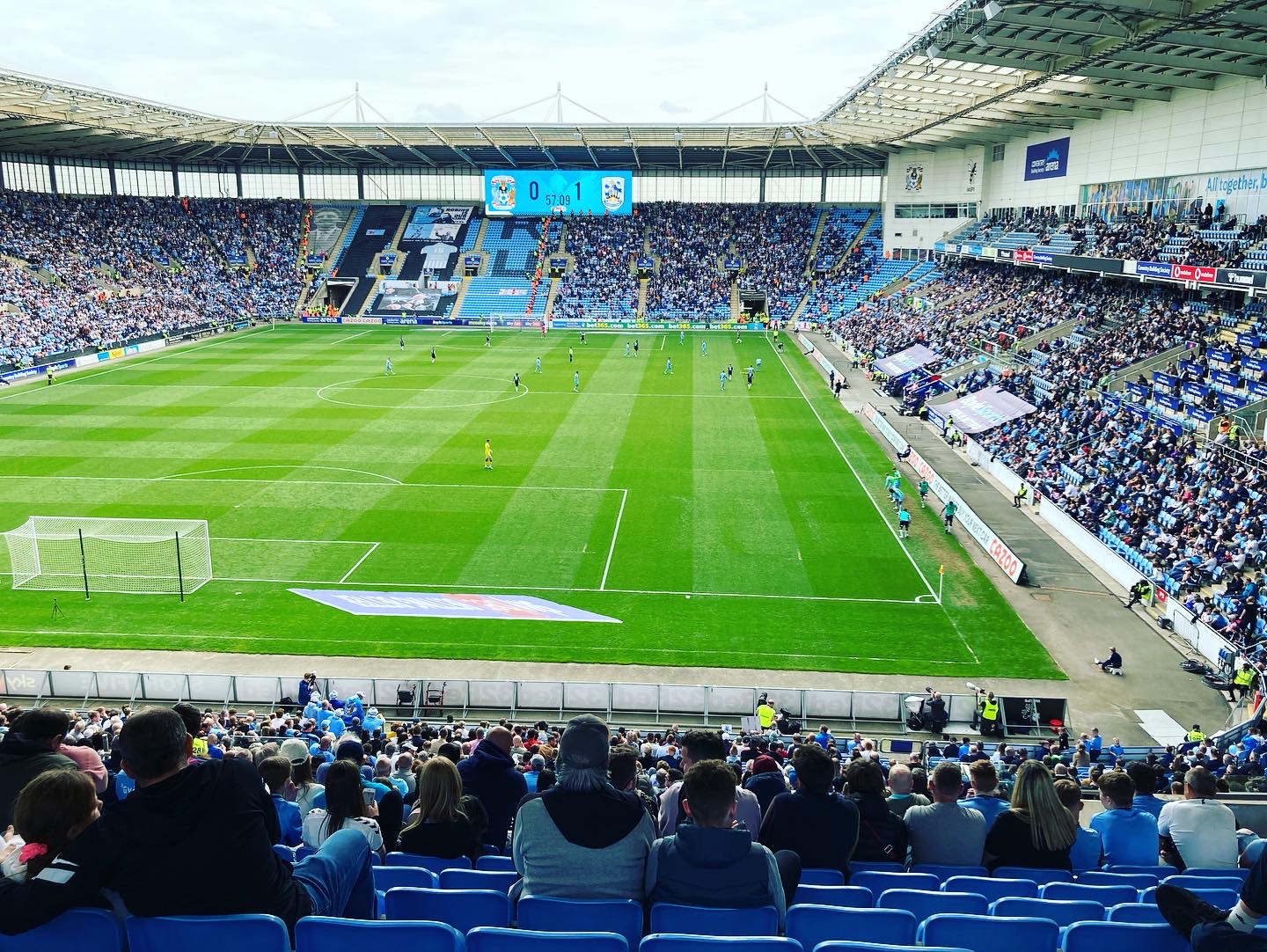 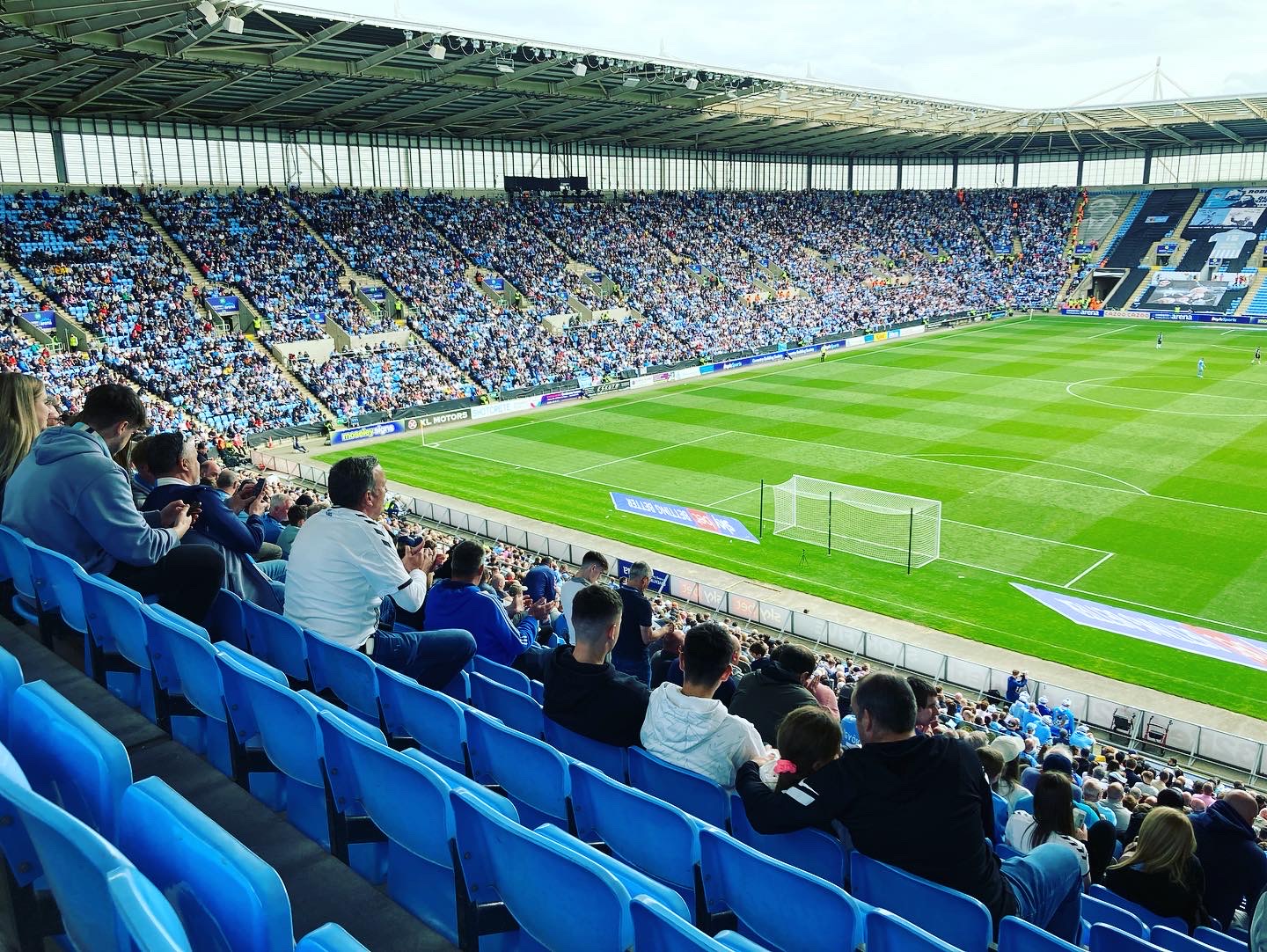 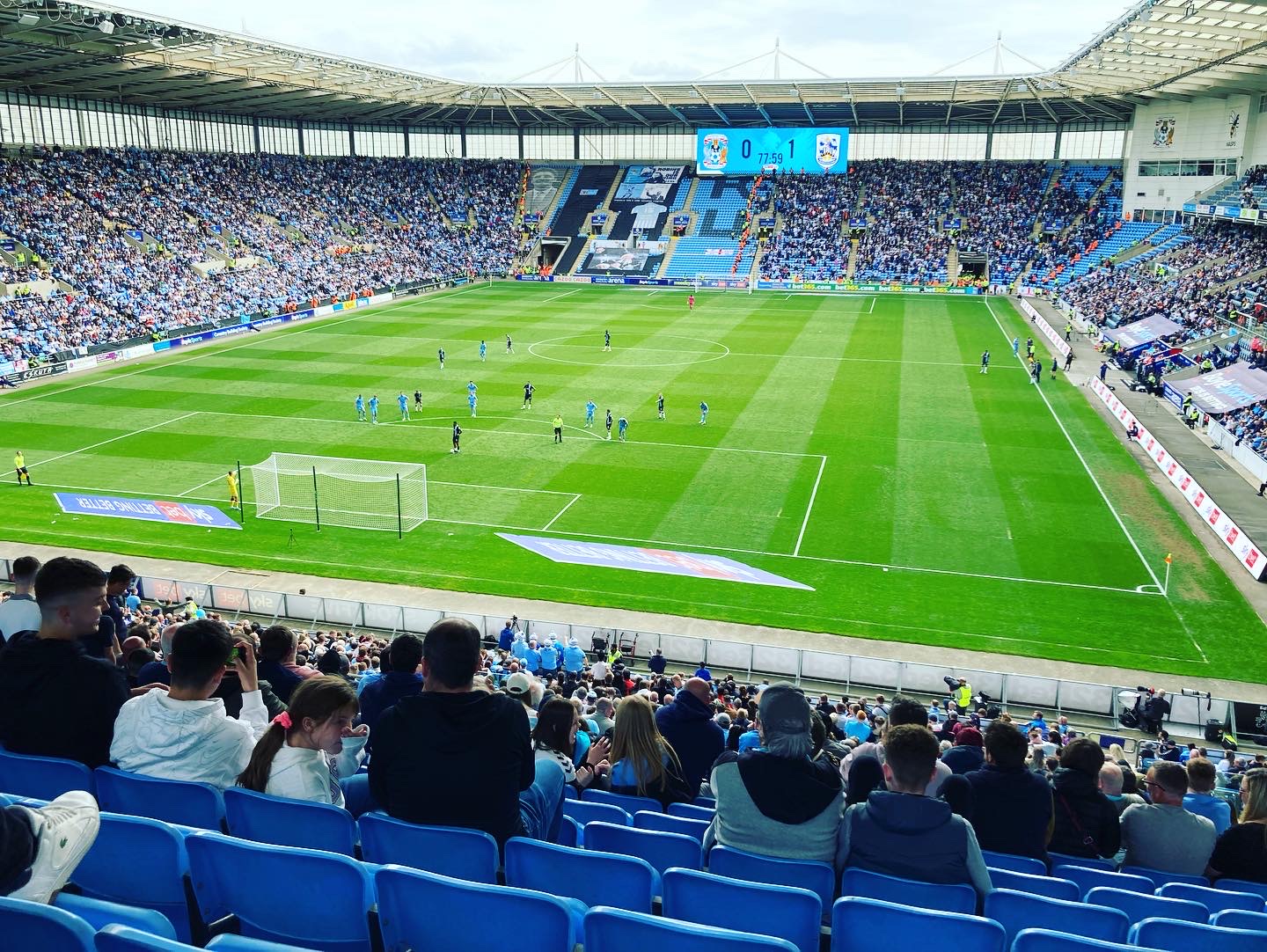 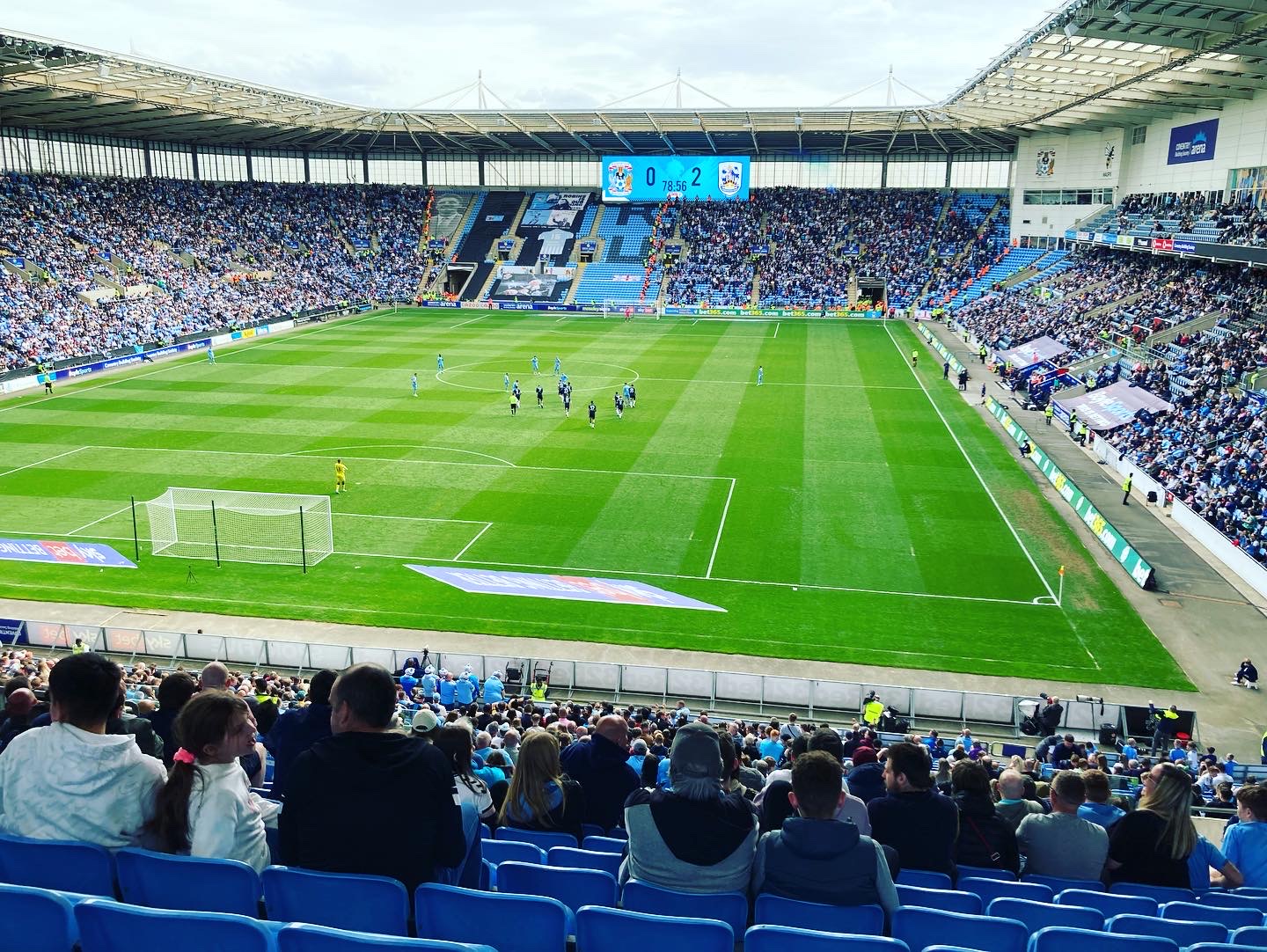 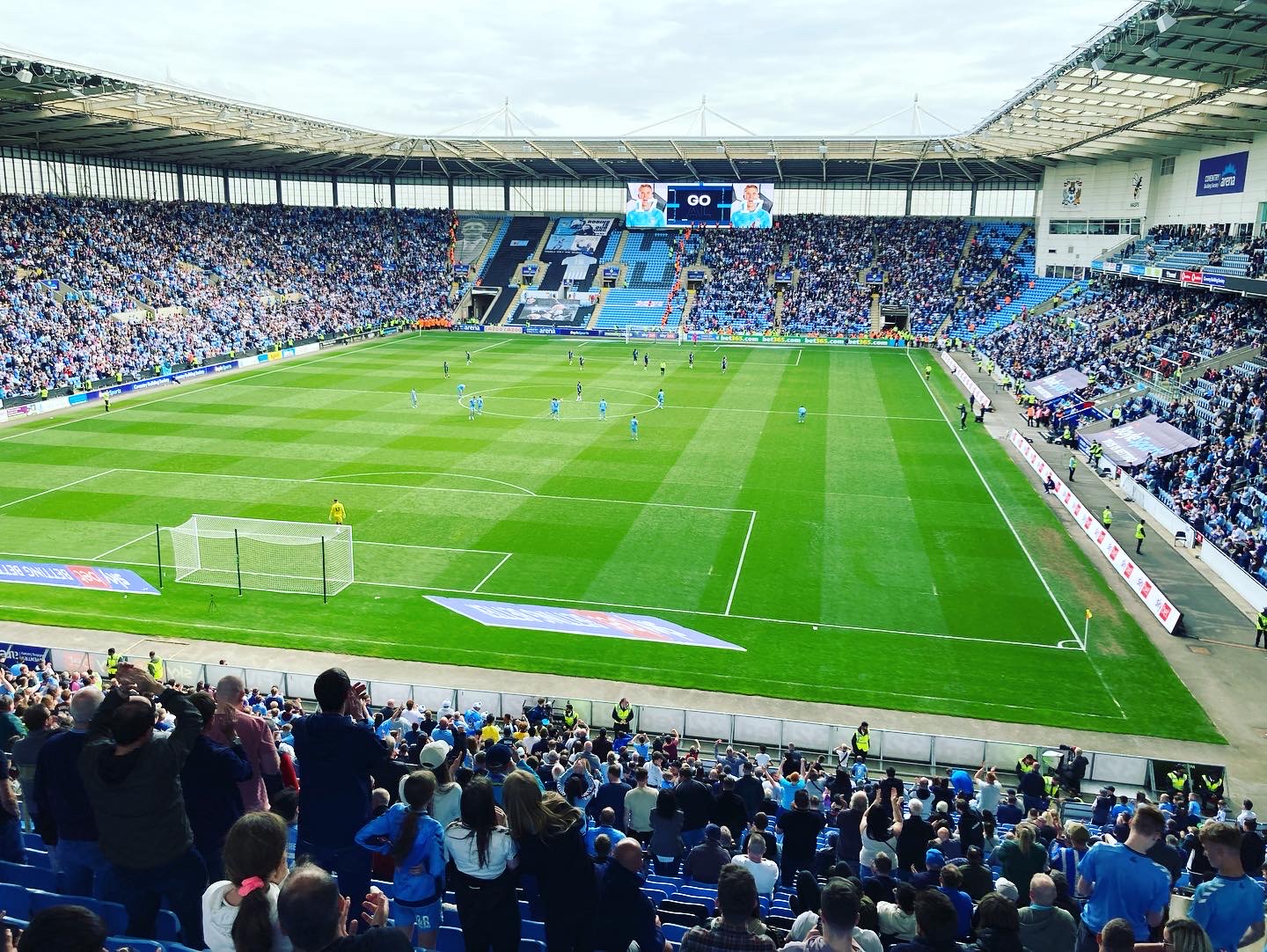 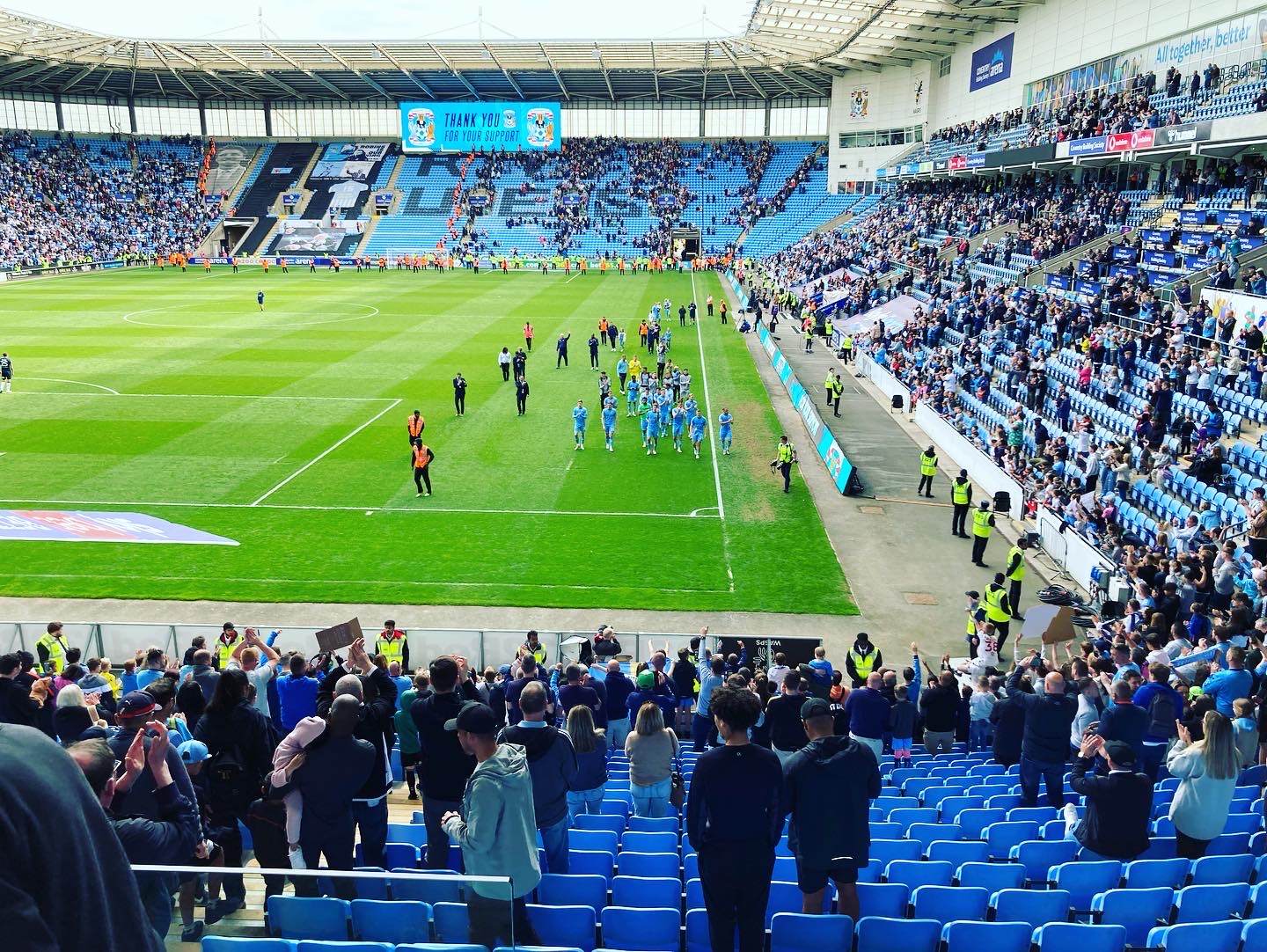