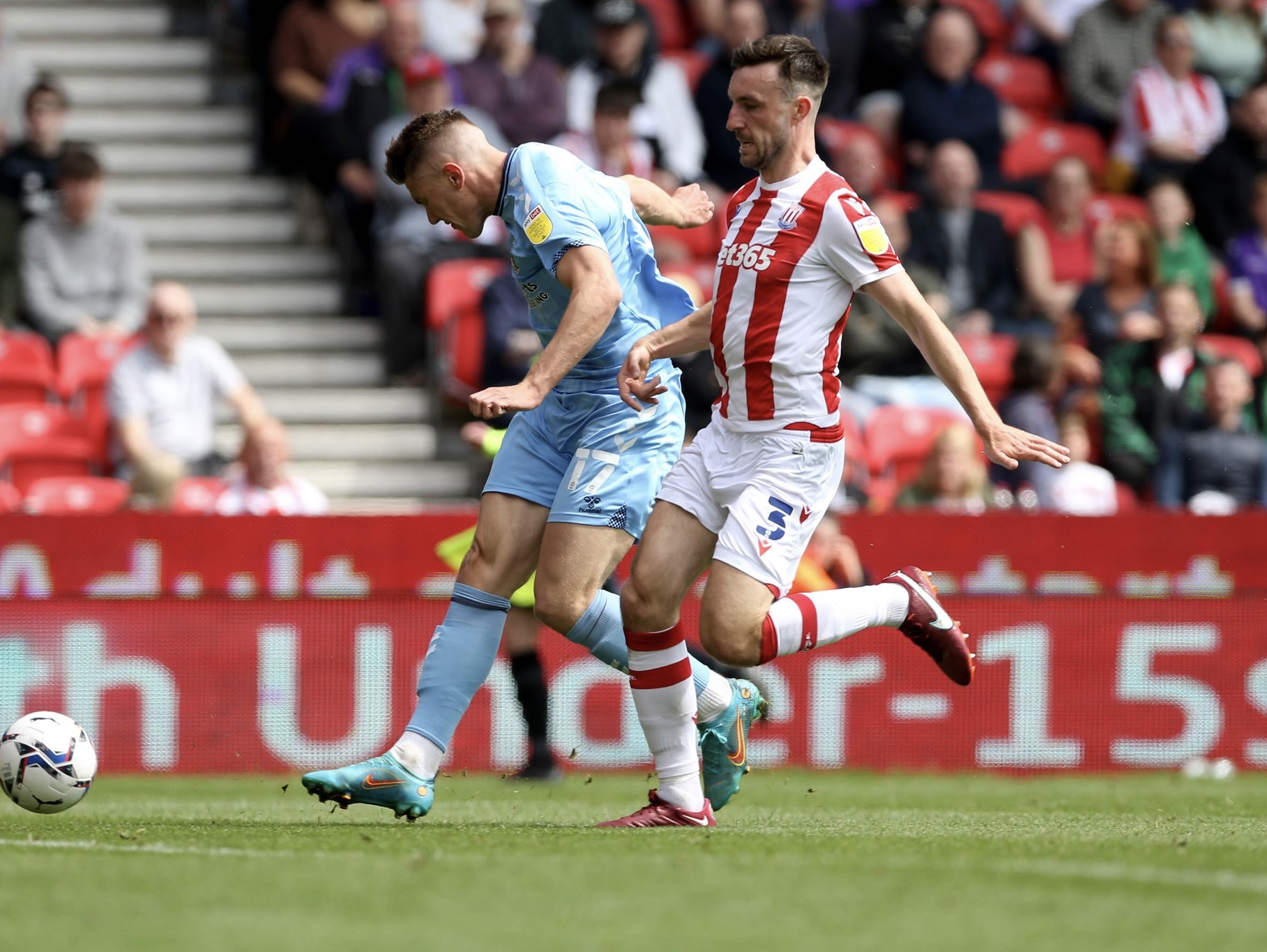 The final day of the regular Championship season was upon us, and on it Coventry City travelled away to Stoke for a 12:30pm kick off in the early May sunshine. I wasn’t expecting much of a spectacle today, given that neither side had anything to play for, but the travelling Sky Blue Army all seemed to be in good spirits on their way to the Potteries regardless of whether they were in for a good game or not! I’ve enjoyed seeing all the photos of supporters in various types of fancy dress ahead of kick off today - I didn’t make the trip myself, opting to watch from home, but I do hope everyone who went has had a good day out. It’s our last game until the new season after all!

I went for a hair cut yesterday, and my barber Ian reckoned that we’d be resting most of our key players for this one. I could certainly see why this might be the case - the game would be a good opportunity to give a run out to some players who haven’t been fully fit lately, or some who typically only make the bench. Mark Robins did just that, recalling Jake Clarke-Salter into the back 3 alongside Dom Hyam and Kyle McFadzean to give him some minutes for what might be the final time, as his loan spell is ending at the end of the season. Fellow loanee Ian Maatsen also started the game - I hope we’ll be able to re-sign both of them for next season, but I’d be surprised if we manage it given how well they’ve both performed for us across this season. Josh Eccles was given a start at right wing back, Liam Kelly would also start the game in midfield alongside Jamie Allen and Jordan Shipley would play alongside Callum O’Hare in attacking midfield. Viktor Gyokeres started up front on his own for what might the final time, with various clubs sniffing around him, and Ben Wilson was in goal, keeping his place after some recent good performances. Gustavo Hamer was the most notable absence, another one who might be on his way after today with Premier League clubs interested in him, but on the plus side Matty Godden was back on the bench after recovering from an injury that’s kept him out for the last few weeks.

As I said, I wasn’t expecting much from today’s game prior to kick off. It had a very ‘mid table sides already on the beach’ sort of air to it, with nothing to compete for except final league position. I was therefore pleasantly surprised when the game kicked off and started with quite a fast pace, we earned a couple of early corners and we looked pretty sharp - definitely not on the beach just yet! Despite the changes in personnel we were playing some slick football, and Stoke looked like they hadn’t been expecting such a bright start to the game either!

As I was watching on iFollow, I had to put up with the local commentary which unfortunately was very biased, albeit entertaining. Ben Wilson caught a long ball that had run through to him on the edge of the area, having waited for it to bounce inside the box first before claiming it - the commentators were adamant the ball was outside and were still registering their disbelief that the referee hadn’t given handball, when the Sky Blues went up the other end and made it 1-0. Jamie Allen slid a lovely ball through to Viktor Gyokeres, who took it in his stride and beat the keeper at his near post from inside the area. It was a great goal, really well taken - it’s no surprise that the likes of Fulham have been linked with the big Swede when he can finish like that!

Gyokeres almost had another within a minute of the opener, again getting in down that right channel and carrying the ball into the box. He had a bit more time to think about the second one, and ultimately put his shot wide of the near post, but it was positive for us - the home side were at sixes and sevens! Jordan Shipley almost scored not long afterwards with a lobbed attempt, again this was just wide but the keeper Josef Bursik was well beaten - we looked really comfortable and firmly in control of the game. Injury struck for Josh Eccles (repeatedly called John Eccles by the commentators) around the half hour mark, which was a shame as he had been playing really well at wing back until that point. He ended up being wheeled off on a stretcher - I hope that it’s not a serious injury! Todd Kane replaced him on the right.

Callum O’Hare came close to putting us 2-0 up with a really good effort from the edge of the box, but Bursik was able to deny him. It had been a great move in the build up, with Jamie Allen finding Ian Maatsen, and Maatsen then carrying the ball inside and playing O’Hare in, who turned on to his right with his first touch and then curled his effort towards the top corner. It’s a shame the keeper got to it, as it would’ve been a great goal! Jordan Shipley forced Bursik into another save not long afterwards, but admittedly his effort was straight down the middle of the goal. Despite our dominance we couldn’t add a second goal, and eventually Stoke would capitalise on this with their first real chance of the game. Sam Clucas drove them forwards on the counter attack after we had lost possession, and he then was on the end of the pull back across the box to tuck his shot away past Wilson and into the far corner. It was a good move, and it probably deserved a goal but it was massively against the run of play!

As a result, we went into half time level at 1-1 when in reality the Sky Blues probably should’ve been 2 or 3 goals ahead! I was happy with how we’d played though, we certainly looked up for the game which was nice to see and I was glad to have been wrong in my assumption that this would be a boring, dead rubber of a game.  If we could play the same way in the second half, I was confident that we’d get a winner.

As it happens, Stoke looked much more up for it after the restart and were taking the game to us from the offset. Nick Powell almost caught Ben Wilson out with a looping effort from outside the box, which required Wilson to tip it over the bar to safety. There was no clear cut chances to speak of for either side for a little while, but Stoke certainly looked a lot more comfortable now than they had done in the first half.

It was nice to see Jodi Jones introduced for us with 20 minutes left on the clock - Jordan Shipley was taken off, and I thought he’d had a pretty decent game today in midfield. I’ve heard that he’s leaving at the end of the season, which will be a shame for sentimental reasons but realistically I don’t think he’s good enough for us any more - still, if he does go we’ll look back on his time with us fondly! A local lad who’s come through the academy, and been with us all the way up from League 2 to where we are now, you just can’t hate him! Viktor Gyokeres had a massive chance shortly after the substitution was made, with Ian Maatsen putting in a great cross from the left that beat the keeper all ends up, but Gyokeres couldn’t connect with the header properly!

Callum O’Hare was taken off with 15 minutes to go, after what had been a typically energetic and tricky performance from him. His replacement was Matty Godden, who was given a warm reception by the travelling Sky Blue Army and rightly so! It’s great to see him back after injury, even if it just for a cameo appearance at the end of the season. Hopefully he stays fit over the summer! Stoke gave us a reminder shortly after Godden came on, that they were still in the game - Josh Tymon worked the ball into a shooting position after a nice one-two, but Jake Clarke-Salter read the situation well and got back to put in a brilliant sliding tackle and sent the ball out for a corner. The best chance of the half then came for us, as the clocked ticked down towards the end of the game - Godden swung a deep cross in from the right, which found Ian Maatsen who was charging in at the back post. Bursik was again fully beaten by it, and Maatsen’s header went back across goal and looked in, but defender James Chester was able to block it on the line - another brilliant bit of defending! It looked a certain goal, you have to credit Chester for keeping it out really!

In the end, neither side was able to find a way through to get a winning goal - it would’ve been fitting for us to score a late winner after all the late heroics we’ve seen this season, but sadly it wasn’t to be. The draw leaves us finishing 11th in the table after what’s been a great season! We’ve been able to dream of the Play Offs this year pretty much all season, and while the dream hasn’t become a reality, we’ve been treated to some great football and it really feels like we’re still moving in the right direction as a club. This has been my favourite season for a long time, and I’m already excited for what next season might bring for us!

I’ll be writing a ‘Season Review’ blog over the next couple of days, so keep an eye out for that if you’re a regular reader. Play up Sky Blues!