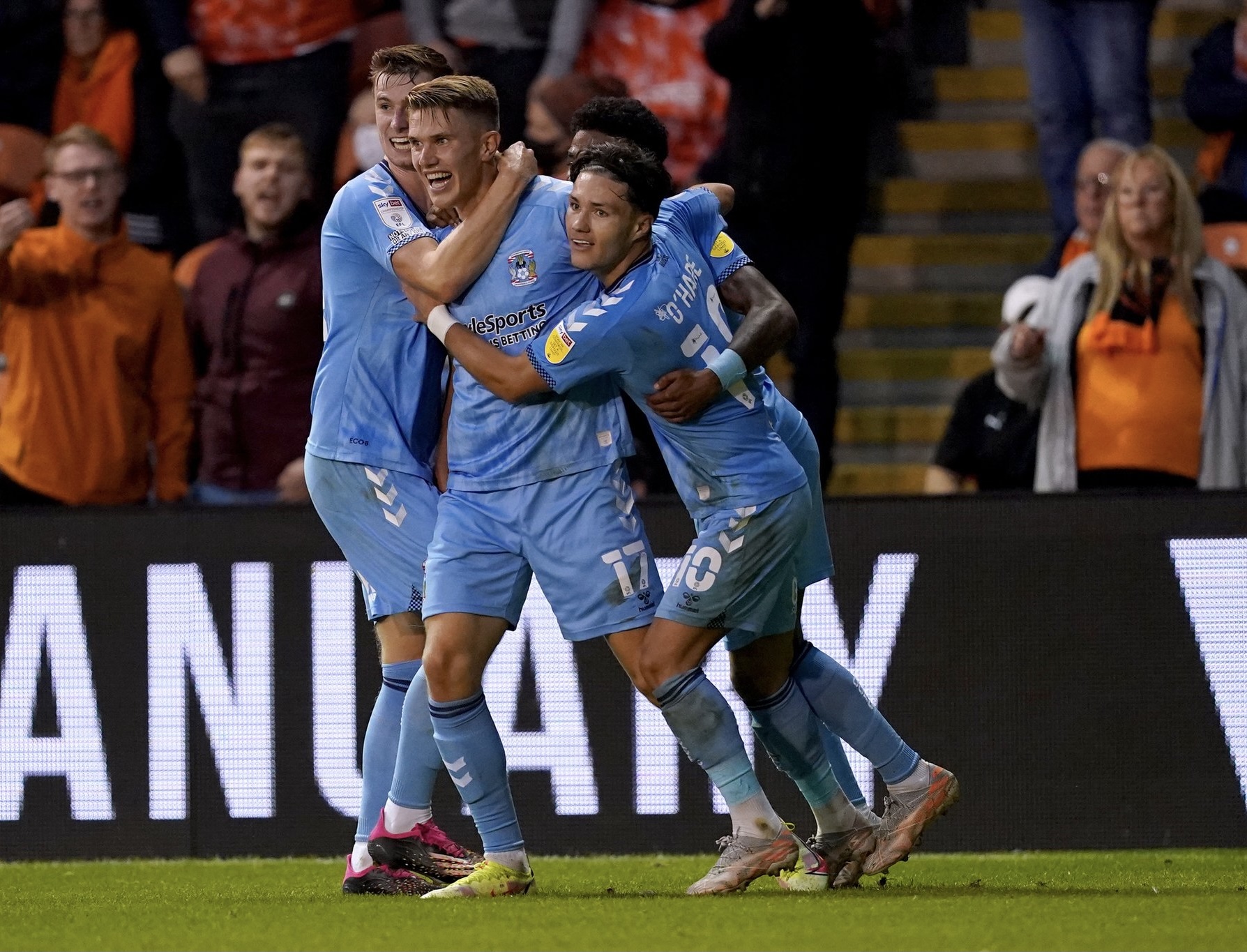 Blackpool is an away day that everybody wants to fall on a weekend, but in typical fashion we’ve ended up there on a Tuesday night. This unfortunate set of circumstances has meant that sadly my view of tonight’s game would once again be from the sofa, via Ifollow. I’m thankful for the opportunity to be able to watch the game at all though, as it turned out to be an absolute cracker!

We started the game in very energetic fashion. Viktor Gyokeres went speeding past former Coventry City man Richard Keogh with ease early on, and tested the Blackpool keeper Chris Maxwell with a toe-poke. We played with great intensity in the opening stages and it seemed to scare the wits out of Blackpool - they didn’t look confident on the ball at all, and every man in our side pressed them and showed them absolutely no respect when they were in possession.

Callum O’Hare seemed to have all the time in the world when he got on the ball for us, and all the space he wanted to run into as well. Blackpool backed off and allowed him to dribble at them, and slip as many through balls through their defence as he wanted to which I found strange - Forest and Barnsley had attempted to kick O’Hare at every opportunity when we played them, but Blackpool didn’t seem to want to get near him. A little naive from the newly promoted side in my eyes, as he absolutely tore them apart.

Richard Keogh got lost at one point, running into midfield and losing possession - Gyokeres was played through again in that left channel but unfortunately couldn’t hit the target! This did worry me slightly, as we’ve been punished already this season for not taking our chances. O’Hare had a decent chance after confusing one of their defenders, but his effort was also wide of the mark.

At times in the first half we passed the ball through Blackpool’s midfield like they weren’t even there! It was very impressive, with Gustavo Hamer pulling the strings and rightly having his name sung by the travelling Sky Blue Army for at least 20 minutes in the first half alone. I’m a big fan of the new chant, to the tune of She’s Electric by Oasis (He’s Brazilian, he only cost us a million!). Blackpool did get in behind us once or twice, with Simon Moore being forced into a couple of saves but he made these look very comfortable. His presence in goal has improved us massively from what I’ve seen so far this season, and I think over the course of the season he could be our most valuable player alongside the likes of O’Hare and Gyokeres.

Chances continued to fall our way but we couldn’t take them as half time drew nearer, however I felt confident we would find a breakthrough tonight. We pressed Blackpool and hassled them whenever they had the ball, and at one point won 4 corners in as many minutes. Gustavo Hamer’s whipped crosses into the mixer from these corners were excellent and Blackpool only just managed to deal with them!

At one point Blackpool had a golden chance with a well worked move down their left hand side - Shayne Lavery flicked the ball past Jake Clarke-Salter and into the box with relative ease, but opened his body up too much and shanked his finish wide - a dangerous moment for us but Lavery should’ve done better with the chance after doing the hard part. Clarke-Salter had an average game for us, I thought he looked a bit slow on the turn but for now I’ll attribute this to a potential lack of match fitness! This opportunity for Blackpool demonstrated how easy it is to fall behind in the Championship though and again highlights why we need to start converting our chances!

Right on half time the breakthrough finally came - Hamer pounced on a loose ball in midfield, and slipped a lovely first time pass through to Fankaty Dabo who was charging down the right hand side. Dabo’s cross was almost perfect, it looked like Maxwell got a fingertip to it which diverted it on to Viktor Gyokeres’ face (definitely his face, not his hand!) and into the net. My first instinct was that it was handball, every replay seems to support that as well but one angle shows it was actually off his chin. Even if it was handball it wasn’t deliberate though and we had deserved to go ahead. Sometimes you need that little slice of luck!

The second half of the game was largely the same as the first - we were intense again and Gyokeres continued to bully Richard Keogh both in the air and on the ground. O’Hare was once again running at their defence at will. Nobody wanted to tackle him and he showed again just what a special player he is!

Blackpool did definitely improve in the second half though and we were slightly less dominant than we had been in the opening 45 - Josh Bowler impressed me with his runs at our defence and I wouldn’t have been surprised if Blackpool had found an equaliser from somewhere. We had more chances though - a lovely move down the left was almost converted by Hamer, with his left footed shot tipped just wide by Chris Maxwell.

Second half substitute Martyn Waghorn was also booked for diving towards the end of the game as well! He went down in the box after what looked like contact to me, albeit a little soft. Regardless, against Barnsley it had seemed like it was just never going to be our day, and tonight was the exact opposite. We played brilliantly and got the luck we needed in the end, and secured our first away win of the season. Nobody in tangerine could surely disagree that we deserved it either. We were the better team from start to finish and the score line definitely didn’t reflect how we played! 1-0 could’ve been 3 or 4 quite easily if we could finish!

Once again we have lots to be positive about after tonight. Nobody really put a foot wrong, despite the odd mistake from Clarke-Salter but these went unpunished. Moore, Hamer, O’Hare and Gyokeres were all outstanding in my eyes. More of the same on Saturday at home to Reading would be amazing!