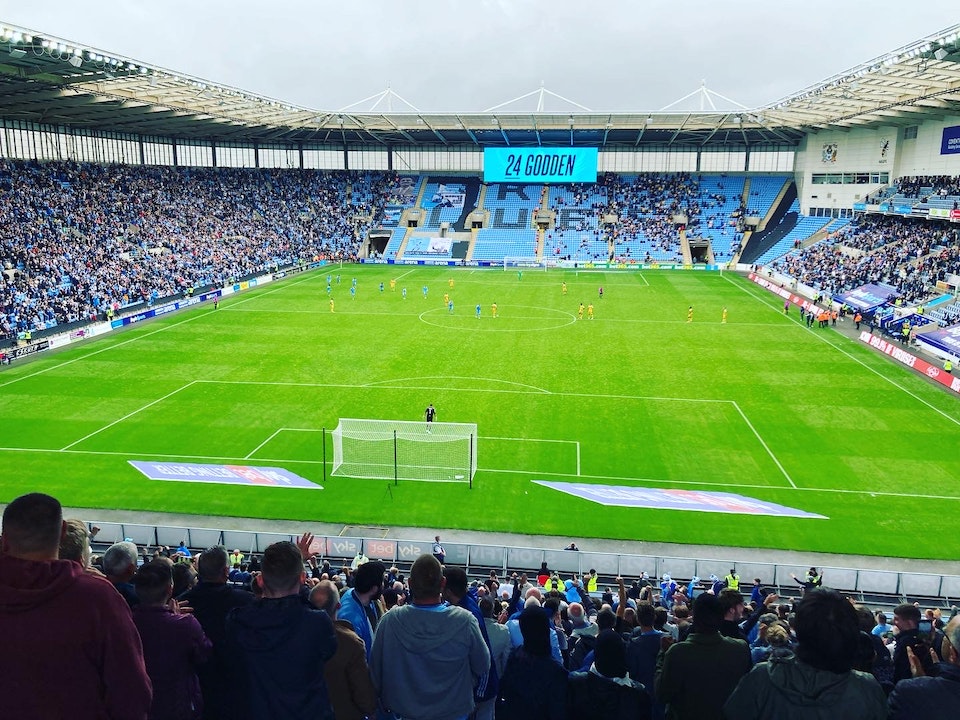 There was nowhere I’d rather have been today than up the City. After our last performance away at Blackpool I was buzzing to be able to watch this team again, and couldn’t wait to see us taking on Reading at the CBS Arena. I was also dead set on sitting behind the goal as well - I like the view of the pitch better from behind the goal, but sadly haven’t been able to sit there for a few seasons. The club didn’t open the stand due to lower attendances while we were in Leagues 1 and 2 and some seasons have been played away from the ground entirely. It was nice to be back there today though!

For the first time in my life as well I actually ventured out to watch a football match on my own. I had been hoping to go up with a couple of mates, but plans fell through. This didn’t bother me too much though - I’m aiming to get to as many games as I can this season, so I’d rather go on my own if needs be than not at all!

I did arrange to meet a mate for a pint ahead of kick off though, before he headed off to sit with family. It was a pleasure to meet Lewis in person - a fellow Sky Blues fan and football shirt collector who I’ve interacted a fair bit with, but only on Twitter! We had a great chat about the Sky Blues and, of course, football shirts - when I tell people I collect shirts they always ask how many I have, and truthfully I don’t know but I know the figure is roughly 120. This is almost always met with a “woah!”, but if you think that’s a lot you should meet Lewis! The total of his collection is over 800 (see more by following him, @lewisdeb90)! Thanks for the pint and the chat mate, we’ll definitely have to meet up again soon!

On to the football. I felt quietly confident about this one after our win in midweek - Reading were better opposition than Blackpool, but they’re currently missing key players and we seem to be playing very well. I would’ve been happy with a draw ahead of kick off though, so long as we put in a good performance. Fankaty Dabo was moved back to the right side of our back 3, where he had started on the opening day against Forest, with Julien Dacosta at wing back. Dacosta needed to have a good game - he’s been largely disappointing when he’s played for us so far (I think some fans might call that an understatement!).

I thought he had a decent enough game though in fairness to him. He’s no Dabo, but if he played like that every week I don’t think there would be so much animosity towards him. Dabo in turn also had a good game for me, despite giving away a penalty, but I’ll come to that later!

I felt we started the game well - lots of possession and a couple of chances, but we didn’t test the Reading keeper Rafael enough. Viktor Gyokeres had a free header at one point, but it was directed straight at the keeper who I’m sure was very grateful for that. It was also lovely to see a minutes’ applause held in the 12th minute for late Sky Blues fan Paul Jones, known to many as Rex, who suffered a heart attack at our opening game against Forest and sadly passed away as a result. I’m sure his family were very touched to see the whole ground on their feet applauding for him - my thoughts and condolences go out to them, rest in peace Paul.

Gyokeres went close again not long afterwards with a looping effort that looked to be going miles wide at first from my angle, but ended up hitting the post! Callum O’Hare also had a shot on target but this was straight at the keeper - O’Hare then got on the end of the follow up himself but again Rafael wasn’t tested. We had fewer chances than we’d had against Blackpool but Reading were a more organised side, although we still played some excellent football! Gustavo Hamer was pulling the strings in the middle of the park, and Ben Sheaf beside him was also very impressive. I think Liam Kelly may struggle to get back in the team once he’s fit if those two keep their form!Again things were looking positive for us, but we couldn’t finish our chances when they fell our way!

We paid the price for this not long before half time - a poor pass sold Martyn Waghorn a bit short and as a result we lost possession. Reading broke into our box and Fankaty Dabo nudged their attacker in the back a little too strongly - a definite penalty in my eyes, but a frustrating one to concede after we hadn’t really put a foot wrong before that! John Swift sent Simon Moore the wrong way, 1-0 to Reading against the run of play.

We didn’t deserve to be losing at half time for me, but we needed to improve up top in the second half! We started the half with a few sloppy touches and loose passes, and my first instinct was that it might not be our day despite our good performance in the opening 45 - how wrong I was!

Once we got a foothold in the game in the second half it was all Coventry City. At times we were camped inside the Reading half and they didn’t seem to have any answers, we were able to get in behind them quite a lot though we still hadn’t found the net by the hour mark. Jamie Allen and Matty Godden were sent on and seconds later our luck changed as Jamie Allen found a way through! I think it was his first touch of the ball - on his left foot as well! A first time shot that was hit too well for Rafael to keep out, not a bad way to introduce yourself to the game!

From this point it was a question of when we would get a winner, rather than if we would. We had numerous attacks and won a few corners, and weren’t majorly tested at the other end at all really! The breakthrough finally came in the 96th minute, as Matty Godden was played in behind the Reading defence, unchallenged, to tuck the chance away with his left foot. A brilliant moment for him after his recent injury problems, and a great way to top off a decent substitute appearance as well! I was absolutely buzzing, the ground completely erupted and the noise was fantastic to hear! Absolute scenes!

We deserved the win as well, having been the better side on the day by a mile! Over the course of the game we outplayed Reading, we looked slick when we played the ball around and when we lost possession we seemed to recover it very quickly, which was great to see. There is definitely a lot to be excited about when you watch our team this season!

For me especially, having not been able to go to the Forest game and experience the joy of the last minute winner in the ground that day, I absolutely loved it! It was also great to see that every player in our side played pretty well - Ben Sheaf was my man of the match, having played excellently in the centre of midfield and then also at centre back in the second half! He moved to where Dabo had been once Jamie Allen came on, as Dacosta went off and Dabo went out to the right - a great change in my eyes and it definitely worked!

All in all, a great day for us Sky Blues fans! 3 wins from our first 4 games, and really it should’ve been 4 from 4! 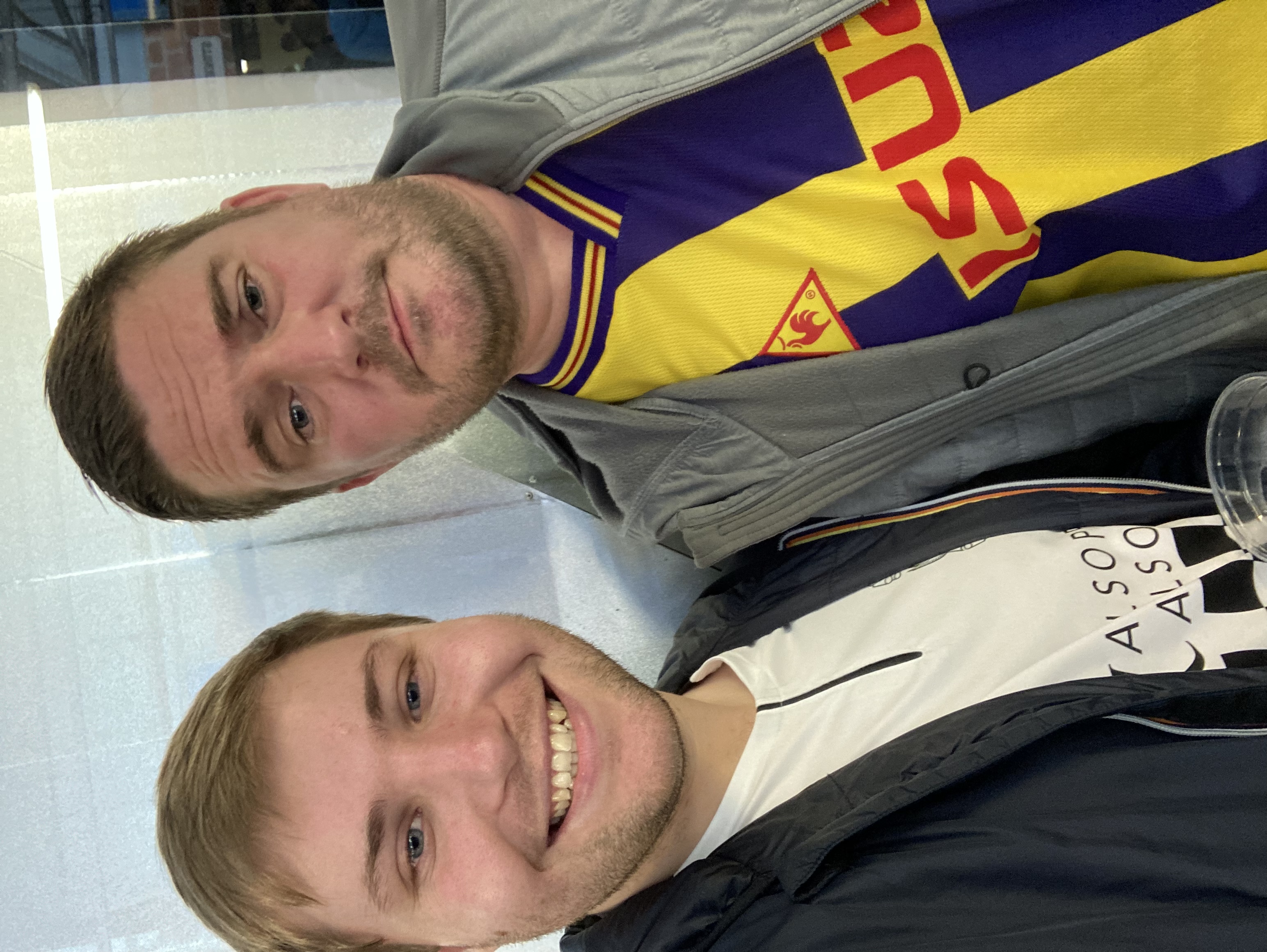 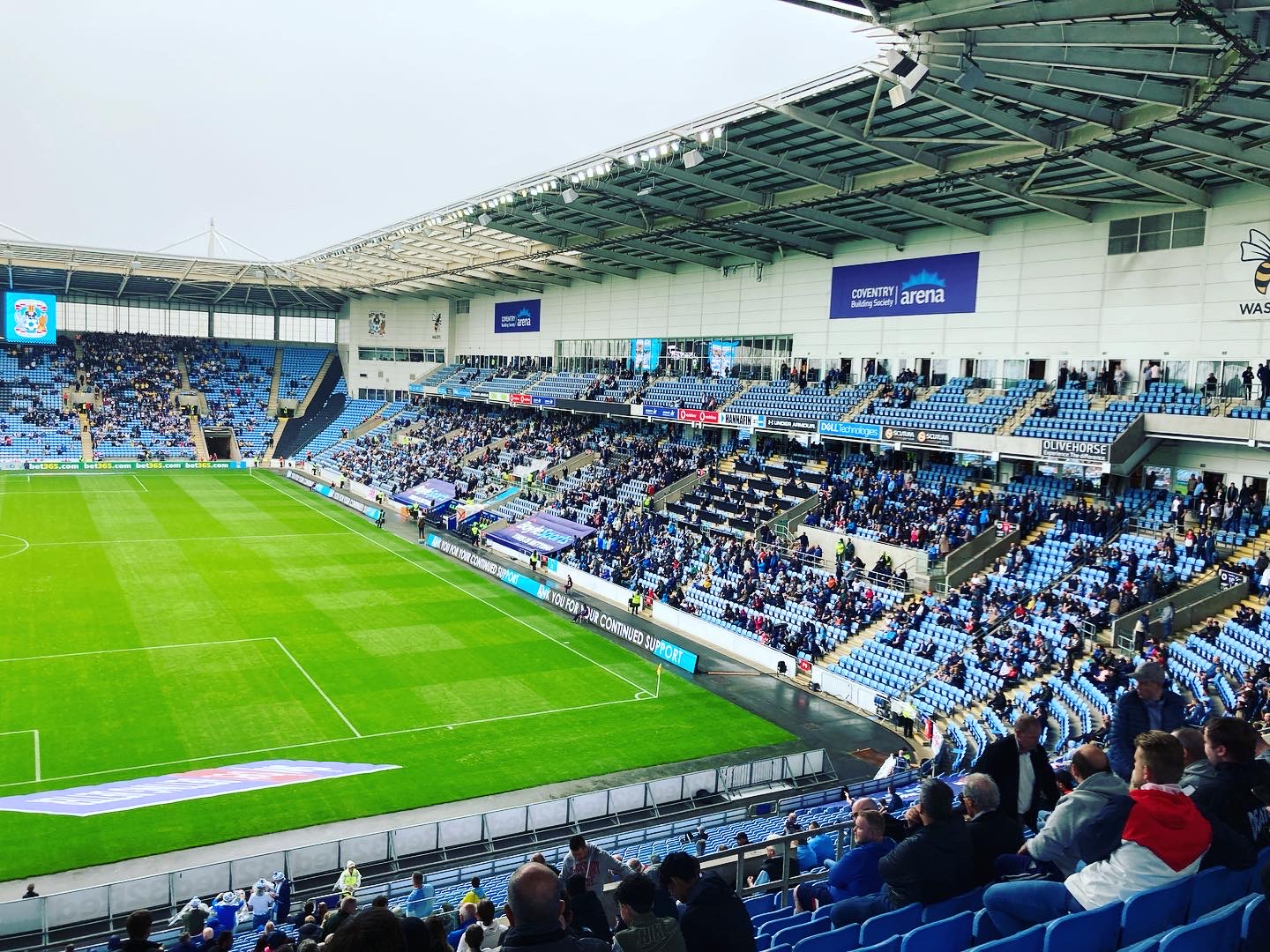 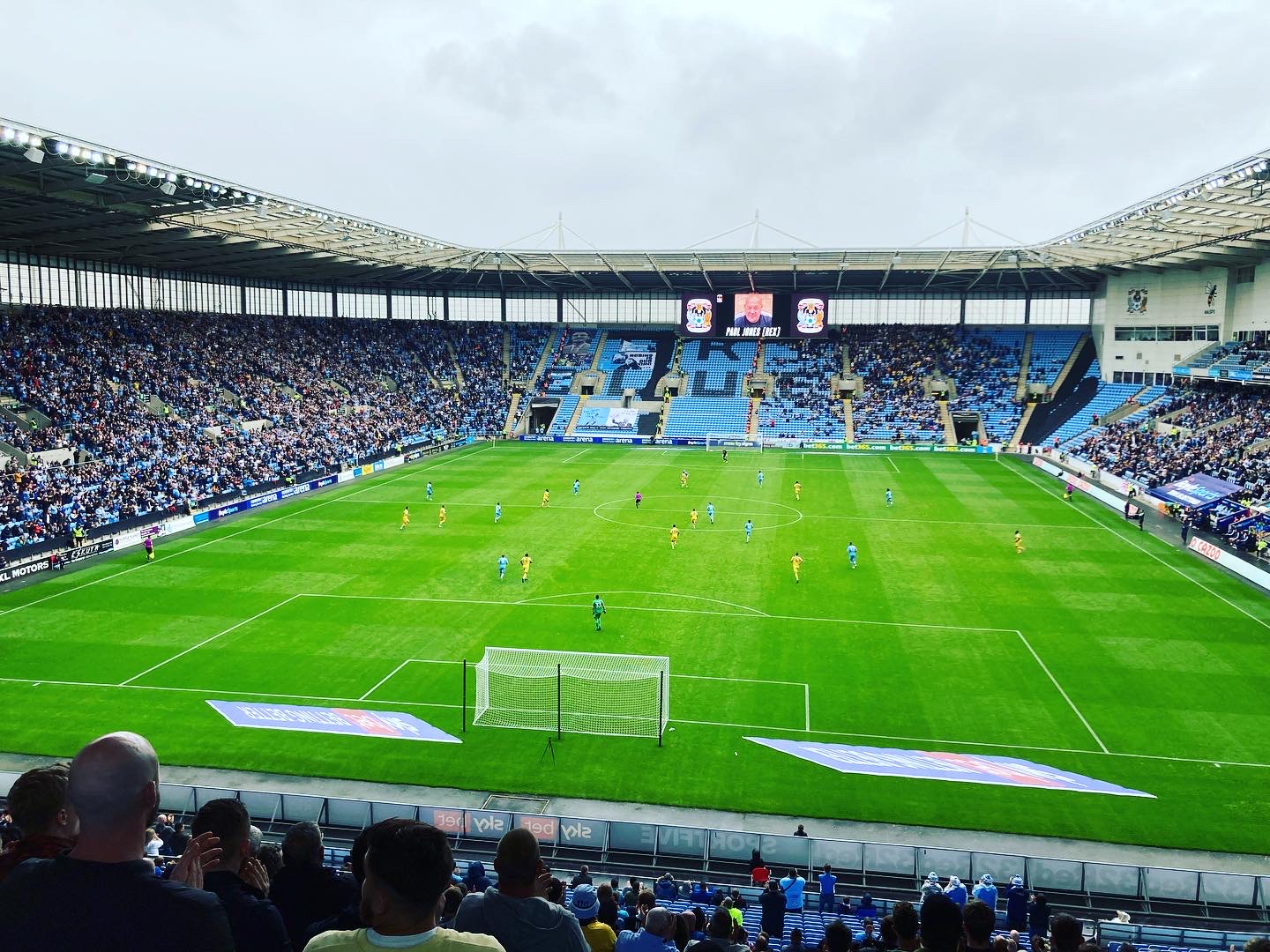 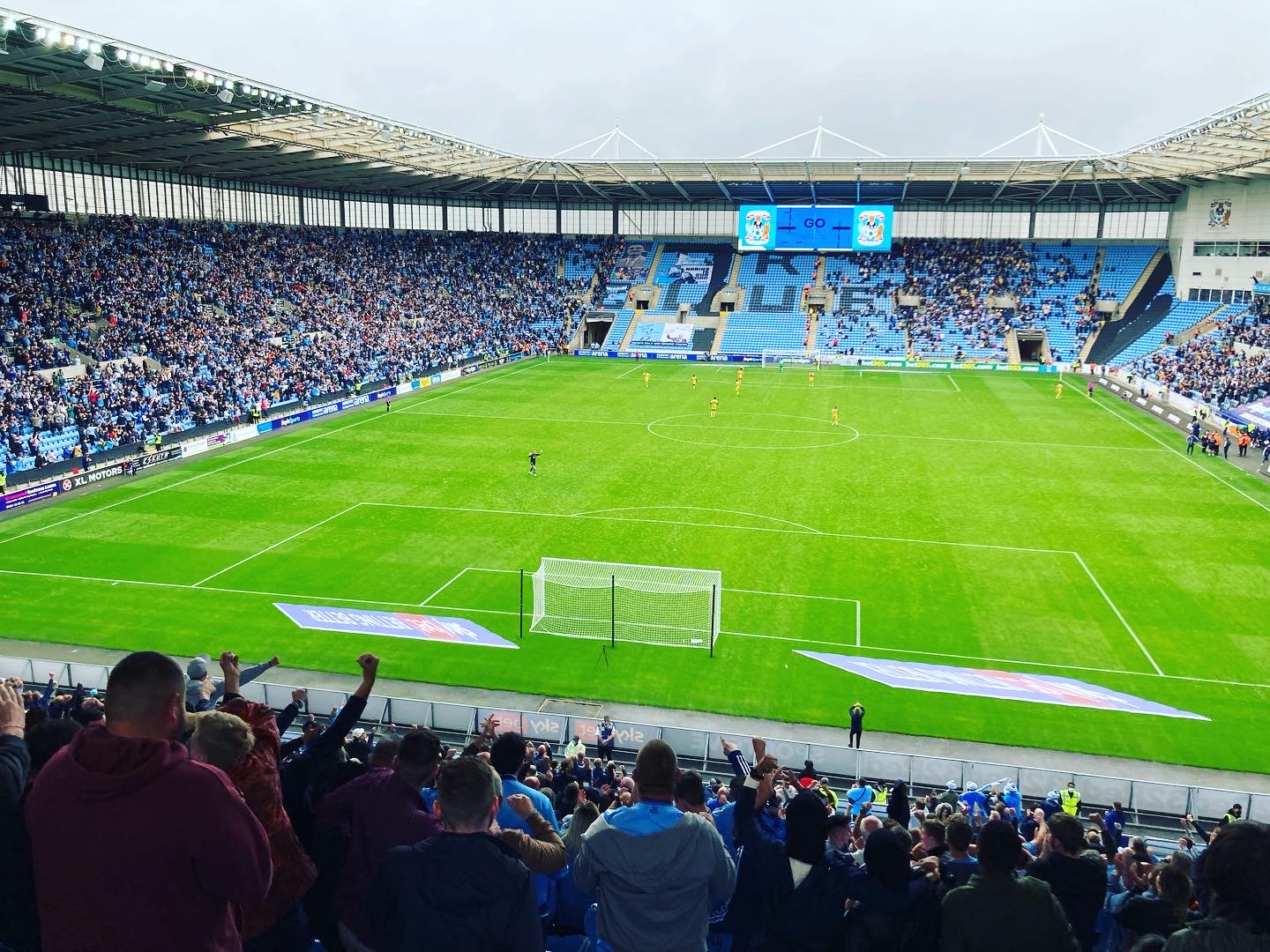