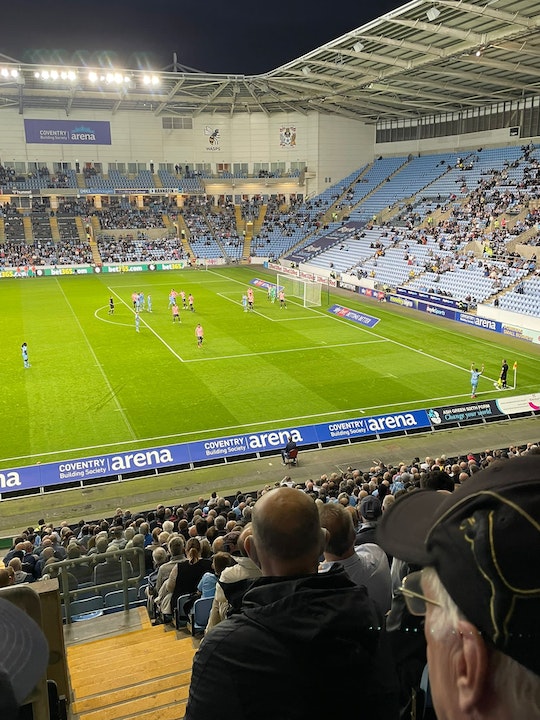 While most football fans have been turning their attentions to the Champions League this week, us Sky Blues fans were excited to welcome Mick McCarthy’s Cardiff City to the CBS Arena in the Championship tonight. Coming into this one off the back of a good win over Middlesbrough at the weekend, it’s not hard to understand why! We’ve been a joy to watch so far this season - sadly, work commitments have meant that I couldn’t make it up to the ground to watch this game, but I was able to see the second half via iFollow!

From what I’ve seen and heard of the first half, we were the better side. iFollows’ highlights showed Simon Moore making an impressive clearing punch from a Cardiff set piece and a Dominic Hyam header from a Sky Blues corner that he arguably should have done better with, but undoubtedly the highlight of the first half was Viktor Gyokeres’ goal. A quick break down the left from Jamie Allen, who carried the ball really well before slipping it through to the big Swede in the middle of the park - Gyokeres then carried the ball for between 20 and 30 yards before finishing really well from the edge of the box! A great goal from a player who is rapidly becoming a fans’ favourite here! He’s certainly one of my favourite players at the minute - his work rate is fantastic and he’s adding goals now which is always a winning combination for me!

Gyokeres did plenty of running at the Cardiff defence again in the second half, with a lot of these runs coming on the counter attack. I felt that we were on top for most of the second half and despite a lack of clear cut chances we always seemed in control of the game. Cardiff’s tactics appeared to be centred around hitting it long for Kieffer Moore and James Collins, their big men up top, but we looked equal to this. Cardiff also seemed intent on fouling Callum O’Hare whenever he got on the ball, as most teams tend to do given how dangerous he can be!

The biggest chance of the half did fall to Cardiff though - Perry Ng looked as if he pushed Sky Blues substitute Todd Kane off the ball as he was trying to shield it out for a throw in, but the referee waved played on and Ng delivered a great ball to Collins, who had a free header from around 8 yards out but couldn’t hit the target! A let off for us really although I did think the push on Kane was a foul, I’m sure Cardiff fans would disagree though. Regardless, Collins should’ve done much better with the chance but I’m glad he didn’t!

I really felt that we looked dangerous every time we attacked and it’s a shame that we couldn’t get another goal to give ourselves a bit more piece of mind. Gyokeres had a big chance but the Cardiff keeper managed to get a touch on the ball as Gyokeres tried to take it round him, which scuppered the opportunity. There wasn’t really any chances of note from either side after this, but the game did have a final twist in added time. Fankaty Dabo went flying into a challenge from a Cardiff throw in, for no reason at all it seemed! A very silly thing to do, resulting in a straight red card for what must have been put down as excessive force - a ban will follow now and he’ll be a big miss to our side!

After this we managed to see out the win in a tense final couple of minutes, but at lest we secured the 3 points! From what I saw of the game it was a well deserved win, and it leaves us 4th in the table and only one point off the top! It’s amazing to see, and while it’s still early days there does seem to be something in the air around these parts now - everything is incredibly positive and we’re all just enjoying the ride!

The atmosphere at the CBS also sounded excellent, with a very decent crowd for a midweek game too (just over 16000!). It’s left me very excited for our next game this weekend - away at Millwall, a game I’ll be attending and expecting 3 points from now! The most pleasing thing for me is that right now, you have to work hard to find any criticism of this Coventry City team - that will probably always feel strange as a Cov fan but it’s true! Dabo’s red card may be a blemish on a great result tonight but besides that I thought we looked excellent.

I wonder where they’re going to build the new statue of Mark Robins once we’ve secured promotion this season?

Photos from the game supplied by my brother, Joe - thank you! 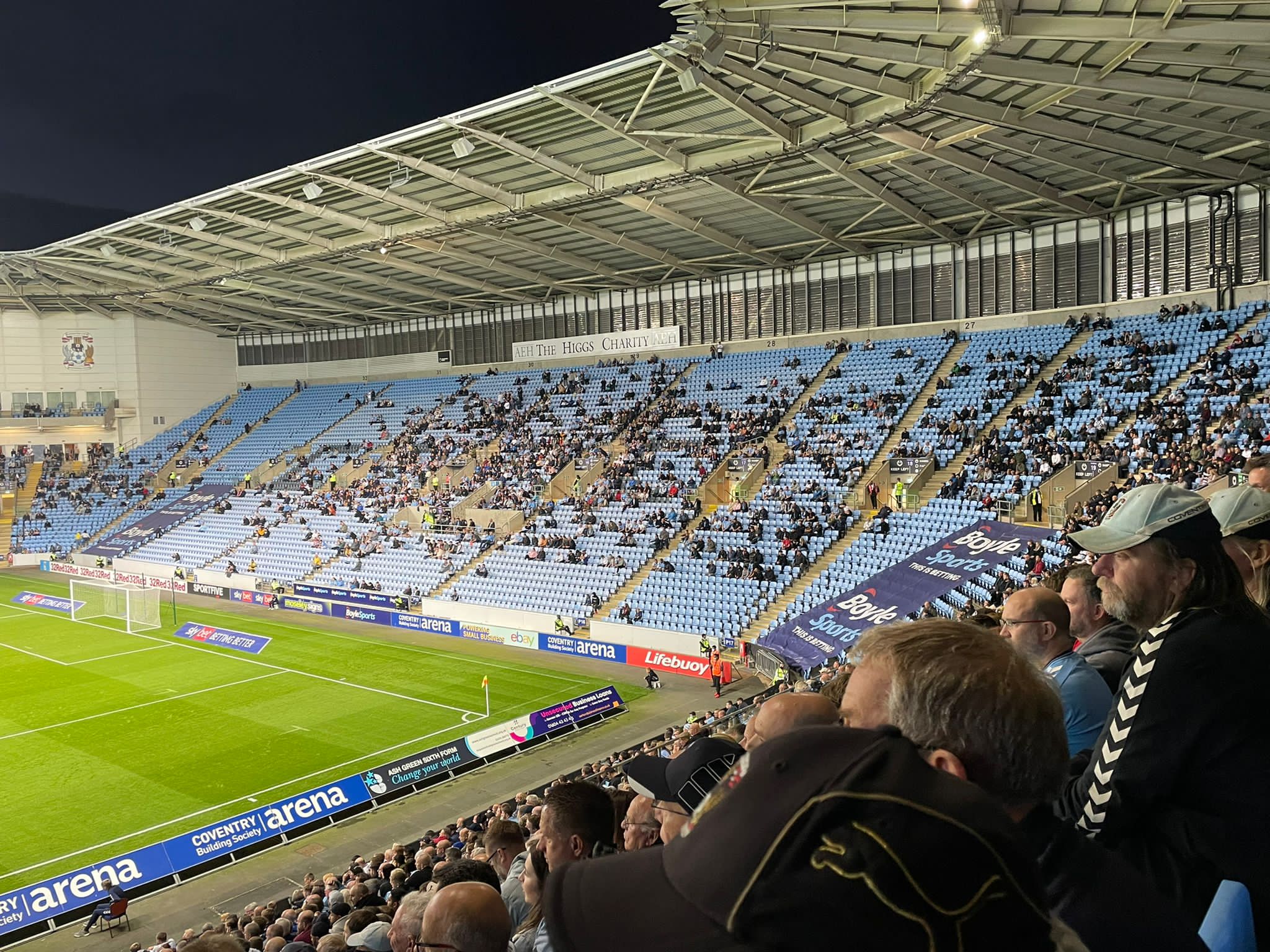 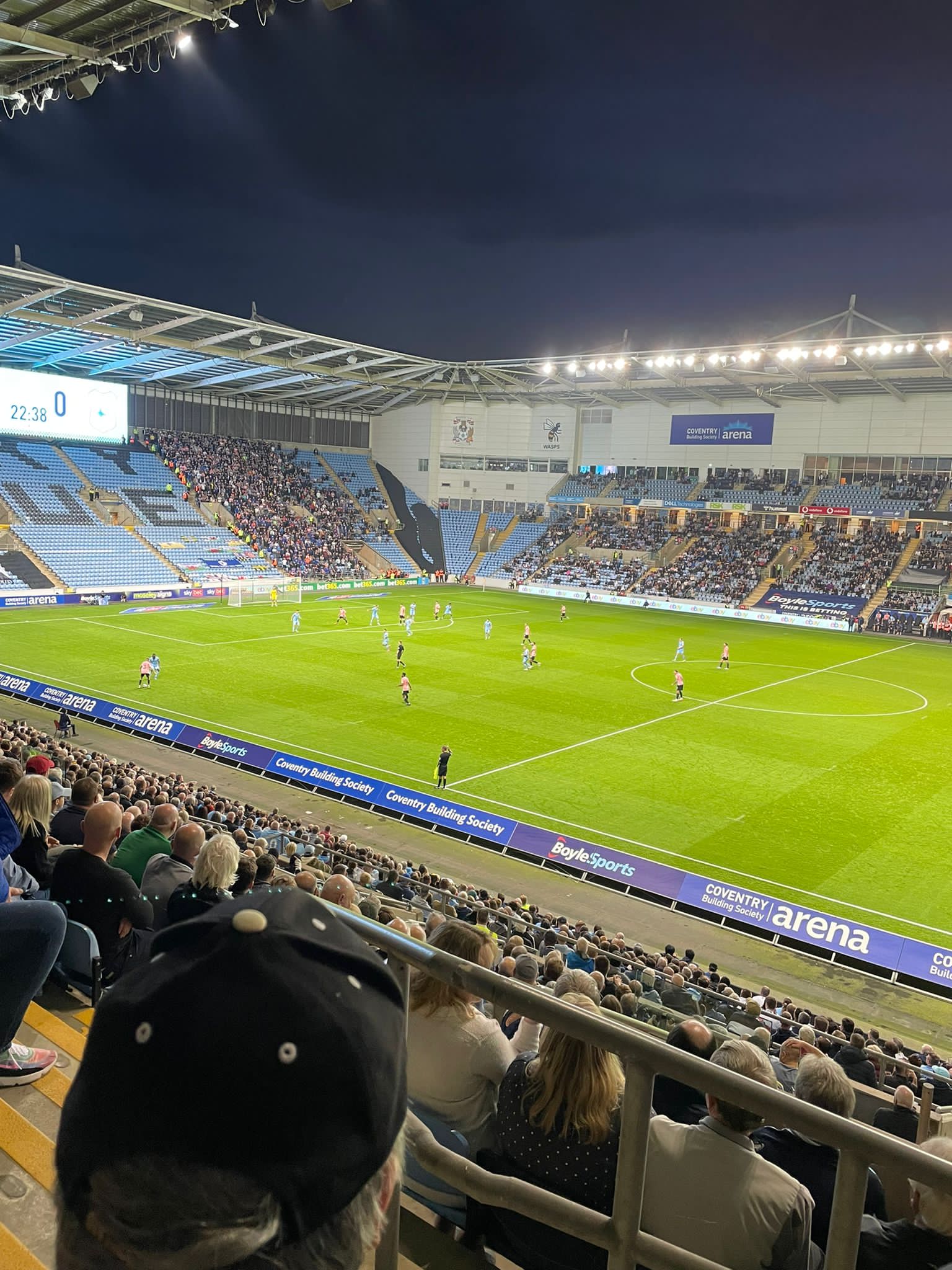 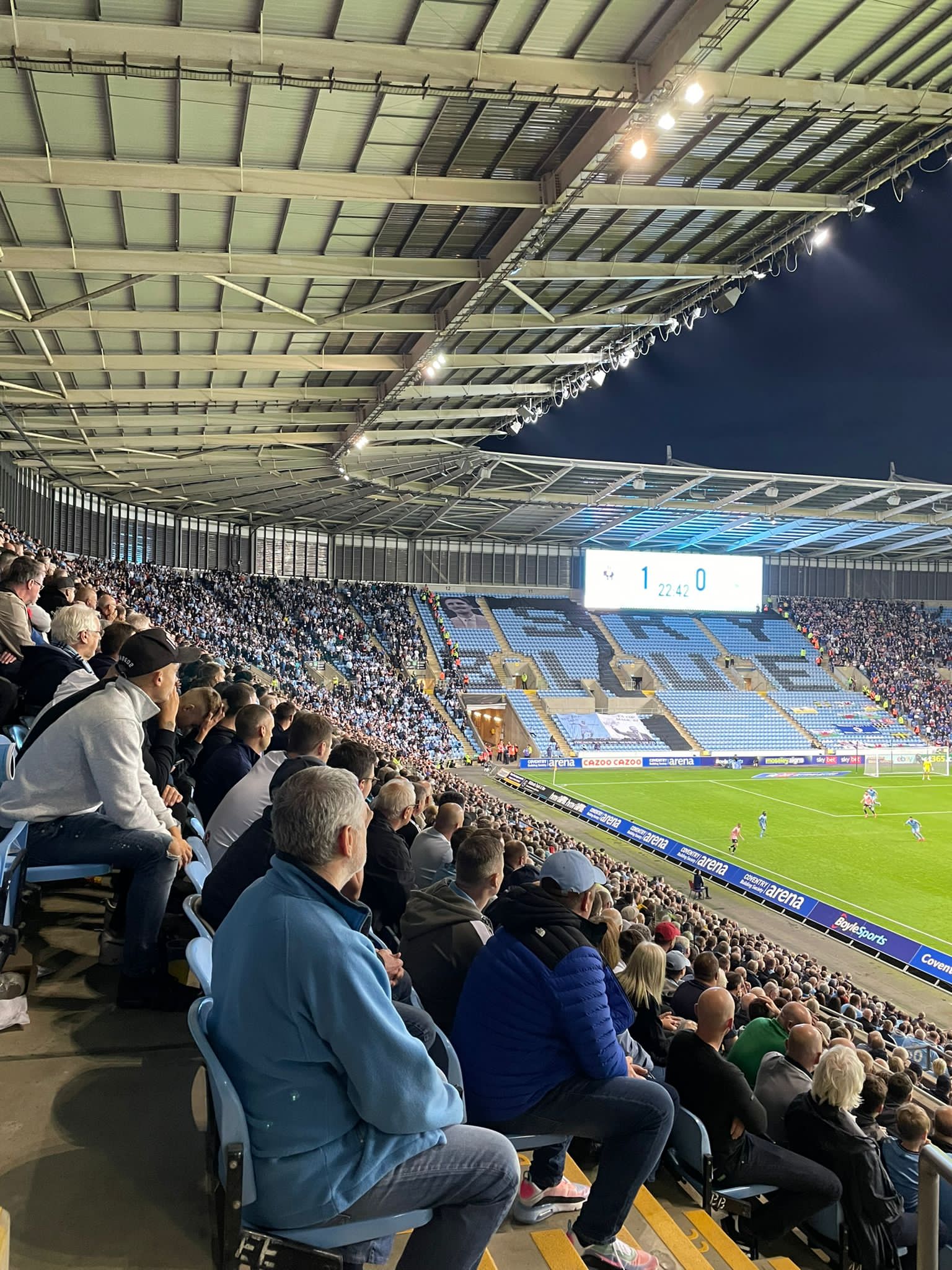 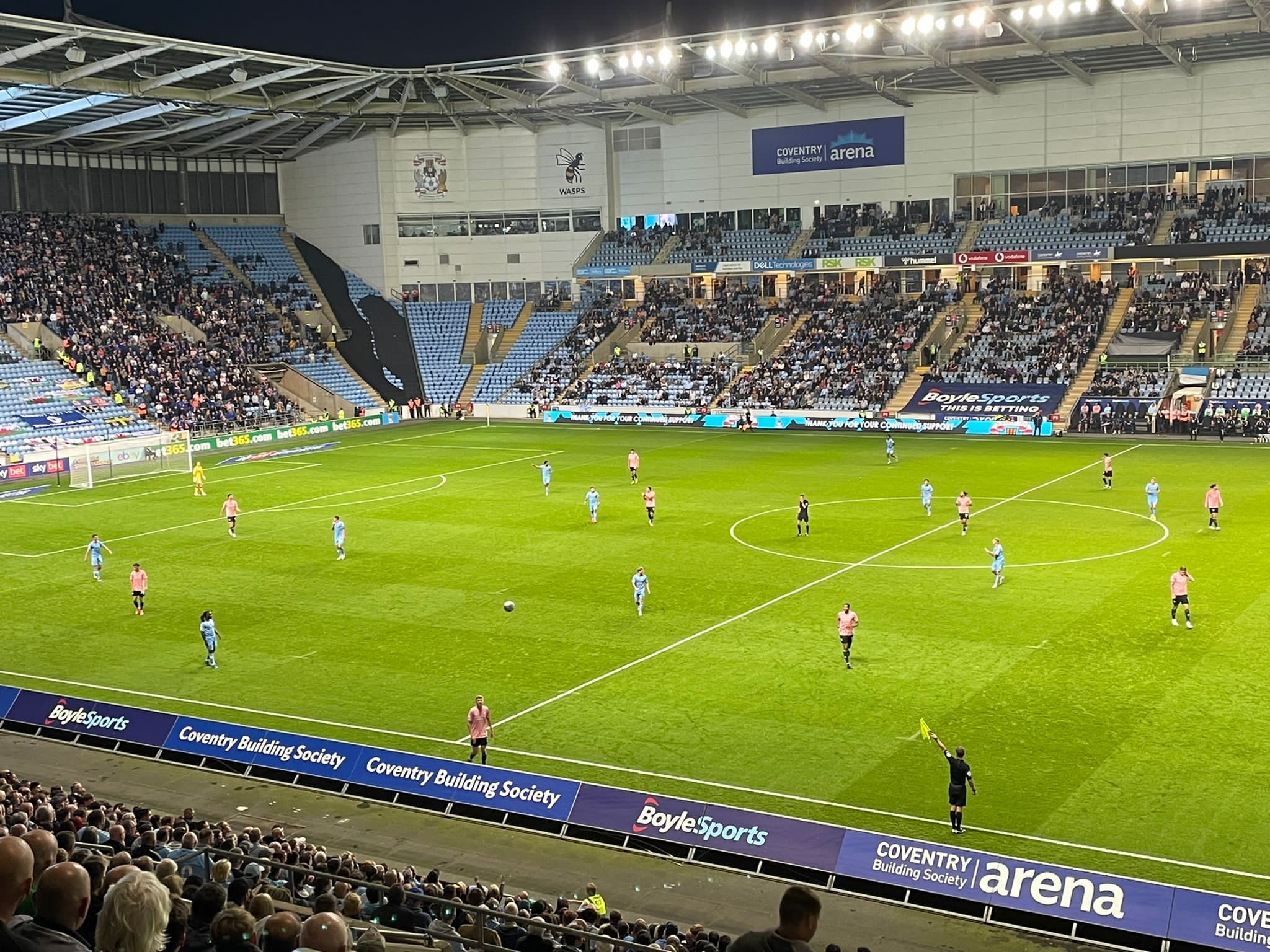